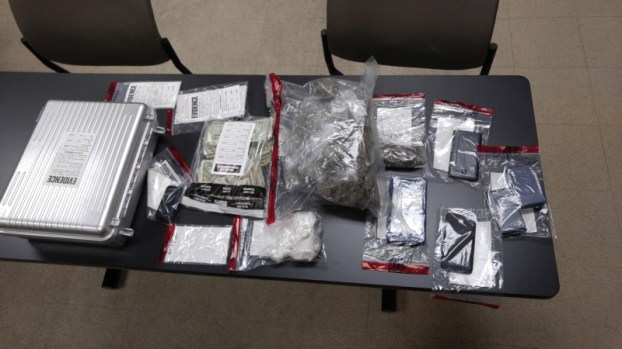 Police seized over two pounds of marijuana, cocaine, cash, and pills following a two-month investigation. Police charged a man with involvement after a short foot chase in the Walmart parking lot and are searching for another man involved in the drug investigation. Shavonne Walker/Salisbury Post SALISBURY — Police officials say they seized two pounds of pot, pills and other drugs as well as cash from a West Monroe Street home following a two-month investigation. Police arrested one person involved in the drug investigation and are searching for another.

Police charged the 38-year-old with felony possession with intent to manufacture, sell and deliver a controlled substance schedule II and misdemeanor resist, obstruct, delay an officer.

Officers seized 7.2 grams of crack cocaine and $2,052. Oglesby was issued a $7,500 secured bond and has since been released.

Investigators served a search warrant at his home, 1020 W. Monroe St., where they confiscated $8,078 as well as 97.8 grams of cocaine, 19 hydrocodone pills and 100.5 grams of marijuana or just over two pounds.

Police are looking for Kenneth Derrell Lark, 34, also of 1020 W. Monroe St. Officials said Lark ran from the residence as the search was being conducted.

Salisbury Police were assisted by the Rowan County Sheriff’s Office, Homeland Security and ALE with the service of the search warrant and take down.

Lark has been convicted of manslaughter for which he served just under nine years. He was released two years ago in that 2005 offense. He’s also been convicted of assault with a deadly weapon with intent to kill and misdemeanor drug possession.

School board argues over partisan elections

By Rebecca Rider rebecca.rider@salisburypost.com SALISBURY — Sparks flew at Monday night’s Board of Education meeting as the board discussed the... read more