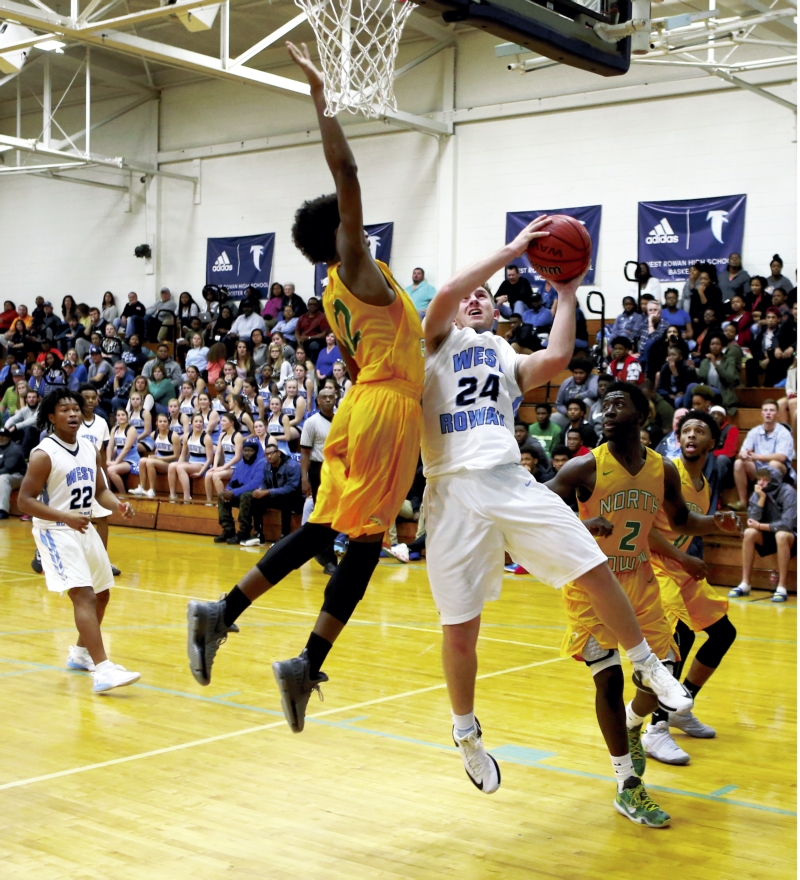 MOUNT ULLA — As a transfer from New Jersey, West Rowan junior guard Darius Kure has no real familiarity with the longstanding and intense basketball rivalry with North Rowan. “No, not really,” he said. “I just play the game.”

And play he did Wednesday night at West with 22 points, including a quartet of three pointers, propelling the Falcons to a 62-52 non-conference win over North. The 5-10 guard scored 15 of his points in the first half when West was able to post 26 points in the second quarter and build a working margin by halftime.

“Basically my teammates were looking for me, ” Kure said, “and when I get a hot hand, the coach tells me to let it loose.”

The Falcons (4-2) were able to use their inside size, outside firepower and defensive intensity to avenge a 69-67 loss at North (4-2) last Wednesday. “We played ragged but it was still a great win for us,” West coach Mike Gurley said. ” Kure got us started then Caleb Mauldin (17 points, 10 rebounds) got going offensively. But I think it was all generated off of our defense tonight.”

The Falcons concentrated on making North scoring stars Joe Scott and Henderson Lentz work extra hard for any points during the game. Both were held below their season averages as Scott notched 11 and Lentz had 10, but none beyond the 3-point arc.

“Our defense was just phenomenal tonight,” said Mauldin, the 6-8 junior center. “That is all we have been working on in practices lately. As long as we can get stops, the scoring will just follow.”

West never trailed in the contest as they led, 14-9, after one quarter, then put together a hot sequence in the second period that enabled them to build a margin. Gurley credited the play of speedy guard Jovon Quarles with providing the spark. “The turning point was when Jovon became a real nuisance on defense for about three minutes — to get us going,” Gurley said.

A 5-9 senior guard, Quarles stole the ball and scored, then snagged an offensive rebound for a lay-up. The sequence led to a 12-2 Falcon run that turned a five-point lead into 35-18 at the half.

Kure then opened the second half with another 3-pointer as West pulled away even more, leading, 46-26, and maintaining the 20-point margin after three quarters. The Cavaliers made a mini-charge in the final period behind Scott, Lentz and Malon-Herron-Cuthbertson to trim the lead to the final margin of 10 points.

“They really took us out of the game early,” North coach Andrew Mitchell said afterwards. “West shot the ball well and played hard but I told our guys we were just not focused and ready for this game. So now it is 1-1 and if we get to play them again on a neutral court (the Christmas tournament), we will be ready.”

For the Cavaliers, Alonzo Sirleaf led the way with 13 while Scott and Herron-Cuthbertson had 11 each and Lentz added 11. Kure and Mauldin were the only Falcons in double figures with Tyrese Lawrence chipping in with seven.

Both coaches noted the physical nature of the game which led to a lot of fouls that took the teams out of their normal rhythm. But neither team was able to capitalize at the line as West hit just 6 of 18 free throws while North managed just 9 of 27.

West returns to South Piedmont conference action this Friday at Concord while North is off until next Tuesday when they play in a pre-holiday tournament at Northwest Guilford. The Cavs play Middle Creek next Tuesday, then face Greensboro Page on Wednesday.