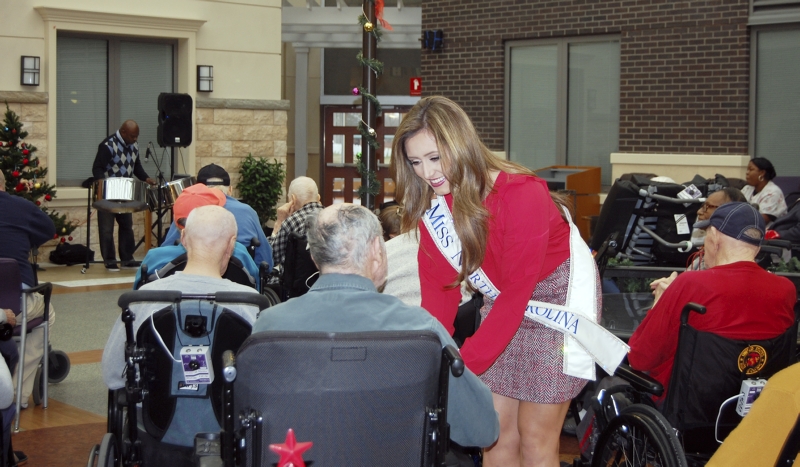 Amanda Raymond/Salisbury Post McKenzie Faggart, 2016 Miss NC, toured the grounds and talked with veterans at the Hefner VA Medical Center on Tuesday to promote her advocacy for veterans' issues.

SALISBURY – The veterans at the Hefner VA Medical Center received a special visit from Miss North Carolina on Tuesday.

McKenzie Faggart, 2016 Miss North Carolina, visited with veterans to promote her advocacy for their causes.

After being bullied during her senior year of high school, Faggart created “The SAFE Project” as a campaign against bullying. She also developed Masterclasses with McKenzie, where she travels to different dance studios to share her platform, according to the Miss North Carolina website.

Faggart said she was invited to get more involved with veterans’ issues by Tom Morgan, who works with a Miss North Carolina company sponsor.

Morgan, a veteran advocate and veteran himself, said Faggart’s visit was the “beginning of an expanded relationship between the Miss N.C. organization and veterans’ causes.”

“I’m thrilled to death that we have someone like McKenzie,” Morgan said.

Faggart greeted veterans while they enjoyed sweets and a steel drum player who played holiday classics and popular favorites.

Faggart also toured the Hospice Unit, met with Director Kaye Green and visited the grave of an unclaimed veteran who was buried earlier that day.

“A lot of these men and women don’t have a lot of visitors,” Faggart said.

She said it meant a lot to be able to visit the veterans during the holiday season, and was thankful to all veterans and current troops for their service.