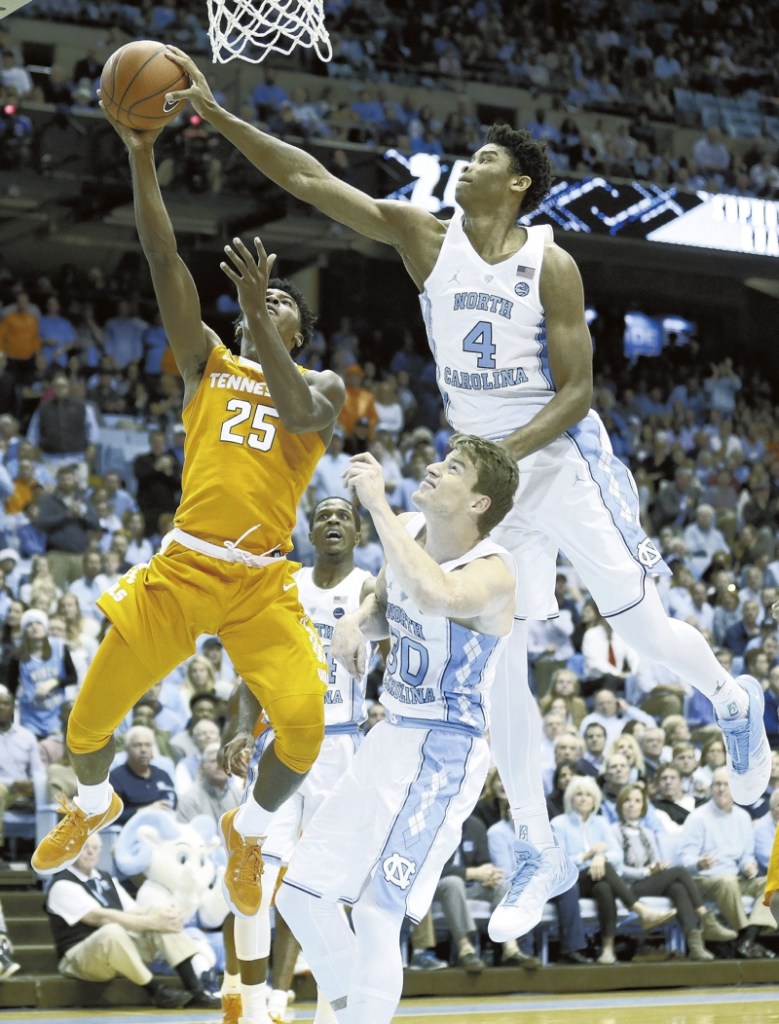 RALEIGH (AP) — Kentucky has already spent time at No. 1 in the AP Top 25 , while North Carolina got off to a strong start that had some calling the Tar Heels the nation’s best team.

The two tradition-rich programs meet Saturday in Las Vegas to headline the week ahead in college basketball, one of three games that day featuring a pair of ranked teams.

The No. 7 Tar Heels (10-1) have been in a tough stretch since losing junior point guard Joel Berry II to a sprained left ankle. UNC’s offense hasn’t run smoothly in two wins without Berry, including Sunday’s 73-71 home win against Tennessee after trailing by 15.

“(Whoever’s) wearing a North Carolina uniform’s got to play better,” UNC coach Roy Williams said Sunday. “But I’ve got to do a better job of coaching because I look like I’m talking to a brick wall.”

The game is part of the CBS Sports Classic, which also features UCLA and Ohio State. CBS announced Tuesday that the doubleheader featuring rotating matchups among the quartet has been renewed for three years, with next year’s event featuring Kentucky-UCLA and UNC-Ohio State matchups in New Orleans.

While Kentucky and UNC head west, Saturday’s other marquee games are both located at one venue in the Hoosier State.

The Crossroads Classic in Indianapolis features four ranked in-state programs: No. 15 Purdue against No. 21 Notre Dame, along with No. 9 Indiana and No. 18 Butler at Bankers Life Fieldhouse.

Villanova remained at No. 1 for the second straight week, though its lead on the second-ranked Bruins shrank a bit with UCLA picking up a third first-place vote.

The reigning NCAA champion Wildcats (10-0) host Temple on Tuesday night, then are off until hosting American on Dec. 21.

The Atlantic Coast Conference continues to lead all leagues in ranked teams, with UNC and Notre Dame joined by four others: No. 5 Duke, No. 11 Louisville, No. 13 Virginia and No. 23 Florida State.

FSU was tied for No. 25 in the Week 3 poll after a 4-0 start, but fell out following a Thanksgiving Day loss to Temple the following week. The Seminoles climbed back in after beating then-No. 21 Florida and face Manhattan on Saturday.

USC, in for the first time this season, hosts Troy on Saturday.

While the Gators fell out after the loss to the Seminoles, Iowa State dropped out from No. 25 to end a streak of 61 consecutive poll appearances — the third-longest active streak behind Kansas (148) and Arizona (84).

The NCAA required the Turkish 7-footer to sit the Wolfpack’s first nine games after examining his amateur status following an overseas career.

There isn’t a very long list of teams among the “others receiving votes” category within reach of the Top 25, though Wichita State could make its case this week.

The Shockers (9-2) are coming off a 76-73 win against Oklahoma over the weekend and face another Big 12 opponent by hosting Oklahoma State on Saturday.

Meanwhile, Buzz Williams’ rebuilding project at Virginia Tech is gaining momentum. The Hokies (8-1) beat Mississippi over the weekend for a third win against power-conference opponents, including Michigan and Nebraska.