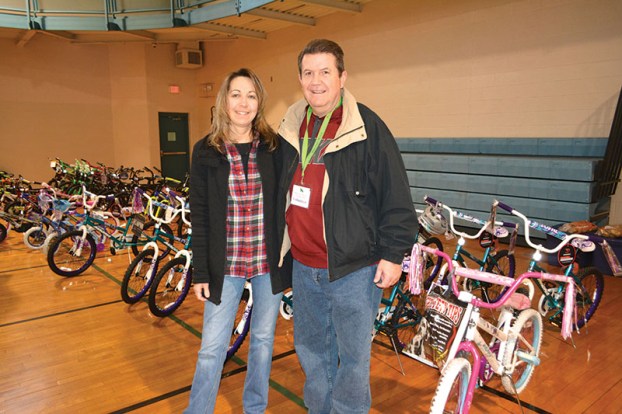 Dawn Franks and Eric Lambert spearheaded the fundraising efforts for Christmas with Dignity at First Reformed Church of Landis. The church raised $20,000 for the event.

Christmas with Dignity deeply discounts gifts for more than 200 children

CHINA GROVE — Jesus said that it is better to give than to receive.

The more than 150 volunteers who participated in Christmas with Dignity on Saturday would surely agree. The third-annual event, sponsored by Main Street Mission at the South Rowan Y, allows families in need to purchase Christmas gifts for their children and grandchildren at deeply discounted prices.

Outside the Y, Ruth and Isaac Maradiaga loaded their vehicle with bikes, soccer balls, toys and sneakers for their three girls, 14, 10 and 3.

“I’m so excited!” Ruth said. “I’ve never seen gifts so cheap. Thank you to everyone in China Grove who is helping.”

Hope Oliphant, Main Street Mission’s community outreach advocate, said the Christmas store would be open from 9 a.m. to 4 p.m. She expected to serve 75 families, plus an additional 25 who were on the waiting list. All told, more than 200 children would receive Christmas presents.

The gym was filled to the brim with gifts and decorated in a Dr. Seuss theme. Hope and Anne Corriher, Main Street Mission’s executive director, sported colorful “Thing 1” and “Thing 2” T- shirts.

Many volunteers from First Reformed were on hand. Christmas with Dignity is the congregation’s flagship project.

“Our whole Christmas season hinges on this project,” said the Rev. David Franks, the church’s pastor.

Each fall, the church hosts an annual “Andy Griffith Show,” which nets about $9,000. Altogether, the church raises $20,000 for Christmas with Dignity. They’ll also buy groceries this weekend for an additional 100 families served by Main Street Mission.

“This is what church is supposed to be,” Franks said, smiling.

“For years,” Eric said, “we have gotten names of families to help in Christmas, but the need has grown. So we decided to partner with Main Street Mission. When we heard that the families have the satisfaction of being able to buy items, we were intrigued, and wanted to get involved.”

Eric said the project makes Christmas for him and his family. He and his wife, Lori, have three children: Nathan, 22, Jonathan, 20, and Hannah, 17.

“We’ve been blessed,” he said. “Our children have realized that outside our home, not everybody’s been as blessed as they have.”

Now, he said, his sons invite their friends to participate in the project, and Jonathan even asked to deliver gifts.

Nearby, Amanda Helmandollar and her husband, Billy, were shopping for their two sons, Jeremy and Thomas. They didn’t have anything specific in mind, she said.

Above their heads hung a large, hand-painted banner with a bright red background and lime green lettering. On it was another famous saying about giving, this one from The Grinch.