‘All in:’ RSS, symphony see success in string pilot program 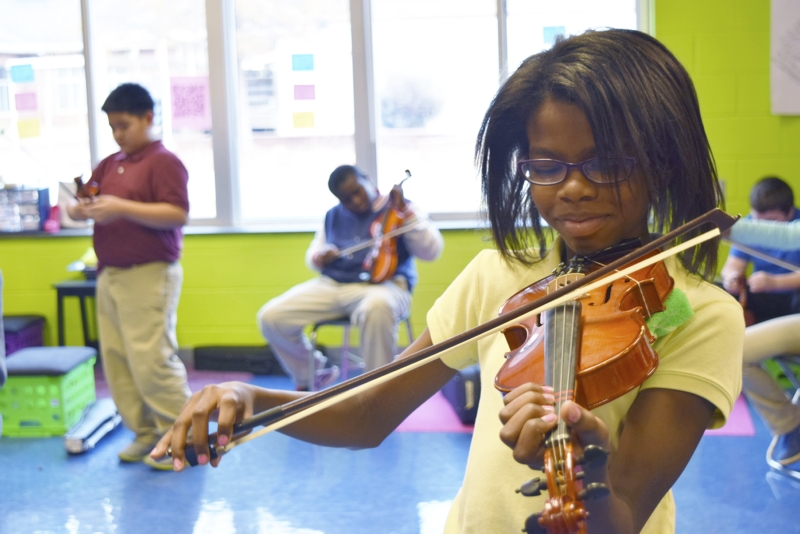 Asha Wilson is one of approximately 20 students in Sally Schultz's fifth grade class learning to play the violin this year. The pilot program is a partnership between the school system and the Salisbury Symphony. Rebecca Rider/Salisbury Post

SALISBURY — Marguerite Keller stands in front of a fifth-grade class at Hanford Dole Elementary School holding a violin. While the students hold their own instruments under their arms, in rest position, Keller talks to them about music.

She tells them about a trip she took overseas when she was young, playing in an orchestra where everyone spoke a different language — but they all understood music.

“I hope you get to have that experience with your violin,” she tells them.

This year, every student in Sally Schultz’s fifth grade class is learning to play the violin. It’s a new pilot program launched by the school system and the Salisbury Symphony.

“We were just brainstorming ways to get more music into our schools,” said Kelly Feimster, director of instructional programs with Rowan-Salisbury Schools.

The symphony’s “Afterschool Strings” program has always been popular, and according to Keller, Salisbury schools used to have a strings program before the county and city systems merged in the late ’80s.

When Feimster and symphony Executive Director Linda Jones put their heads together, they came up with the pilot program.

“It would be all in. Everyone would have an equal opportunity to participate,” Feimster said.

Once a week, strains of strings fill the fifth-grade hall at Hanford-Dole. Keller, a member of the Salisbury Symphony and conductor of the Rowan Youth Orchestra, walks the students through technique and notes each Thursday during the last hour of class, and sets them to practice.

“It’s one of the most difficult instruments to learn initially,” Keller said of the violin.

Some of Schultz’s students have taken to it “like a sponge in water,” while others have struggled.

But there’s camaraderie in the class. Students share rosin to get their bows ready to play or help each other affix blue and green foam shoulder rests to their violins. When Keller pauses class to help a student, the others gather in groups of two, three or four and practice — helping each other through rhythm and notes.

As part of the agreement, the violins — on loan from the symphony — stay locked away in the classroom, only brought out on Thursdays. But Schultz said that the music is something her class can’t stop talking about.

Schultz regularly plays music during class, but since October students have started making requests — violin music. Schultz said the class was surprised to find there are violin arrangements of modern hits, that it’s not all “old people music.”

And it’s having other positive effects, too.

“On Thursdays, I have perfect attendance almost every single Thursday,” she said, “because they’re not going to miss violin day.”

And the students are excited and engaged in a way they weren’t before.

“It’s just been such a positive impact on these kids,” Feimster said.

Feimster and Keller both spoke about the strong link the study of music has with both brain development and student achievement.

“So I think it’s not just a nice add-on,” Keller said.

Over the past two months, the class has been learning a few songs, which they will perform Dec. 15 at 1:30 p.m.

The pilot program will run for the rest of the year, but after Christmas students will have the opportunity to opt out of the program. Starting in January, those who wish to keep learning will be able to take their instruments home to hone their skills.

Feimster said that if it’s successful, the school system and the symphony are looking for ways to expand the program as well as offer a middle school tie-in.

“It is amazing . . . how they’ve come along with this,” Feimster said.