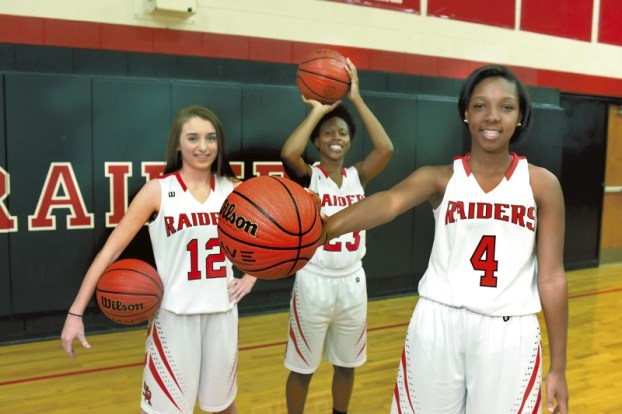 South Rowan missed the playoffs in 2015-16, but it was still a season in which the Raiders turned a corner — and turned a few heads.
They were 3-16 in their first 19 games, but they were 4-1 in their last five, knocking off four teams that finished above them in the South Piedmont Conference standings.
John Davis, who coached the South Rowan boys for 13 seasons before taking a hiatus, returned to the sideline last season as a surprise choice to lead a South girls program that was starting over after the Avery Locklear years.
There were some growing pains, as expected, with a very young team, but things were starting to fall into place in the final weeks of the season.
Davis believes the turning point was the concussion sustained by his star player, Janiya Downs, in the Christmas tournament. Downs missed three games completely. South didn’t win any of them, but the Raiders did learn they could handle themselves OK without her.
“Other girls had to step up for us to be able to compete without Janiya and they did,” Davis said. “Girls got better, and when Janiya came back we were a pretty decent basketball team.”
Downs had one of the best freshman seasons in county history, averaging 19.9 points per game. She was first team all-county in a season in which the county had an overload of excellent players. She scored 30 against Carson in a close loss late in the season and had 25 when South, playing its final game, beat East Rowan.
But Downs is more than a scorer. At 5-foot-10, she’s also a ballhandler, rebounder and passer. Late last season, she was getting better and better at creating high-percentage shots for teammates. That’s when South clicked.
“She’ll find the open people and she’ll send those passing flying in there,” Davis said. “She makes passes that make you say, ‘Wow!'”
While Davis will be expecting automatic double-doubles from Downs in her sophomore season, the Raiders have two juniors who also should average double figures. Riley Corriher averaged 6.6 points last season, while Tazah Hardin, who is known simply as “Z,” averaged 6.3 for the season and 10.2 during the Raiders’ last five games.
Hardin has speed and quickness and is a terror in South’s press. The guard averaged 10 steals in South’s first three games this season, and she’ll score a lot because she’s going to create fastbreak opportunities off her defense. She’s also an athletic rebounder, so she’s at least as likely as Downs to post a triple-double.
Corriher is a steady player who does everything well. She’s a capable shooter with 3-point range.
“I’d say the upside for all three of those girls is just about unlimited,” Davis said.
If games were 3-on-3, South would win most of them. But the key to serious success is going to be finding the right role players to put around those three so that South can win games of 5-on-5.
Freshman Whitley Arnott gives South some height and rebounding strength, so she’ll be very important.
Brooke Lowery is a junior who will be playing her first varsity season, but she’s a good athlete. She was an all-county softball player last spring. She’ll probably be the fifth starter.
Keara McClary, a senior guard who played for Carson’s varsity a couple of years ago, sat out last season. She’ll be a key reserve.
“She’s tough, she’s quick, and she shoots it well,” Davis said.
Junior Jalee Rollins contributed off the bench last season and should have a bigger role this time. Davis likes her competitiveness.
The Carlton twins, Carsen and Camden, give South two more guards with varsity experience.
“The ball seems to find its way to them,” Davis said. “They get loose balls.”
Lauren Shell, a sophomore, brings some size, and she’ll definitely have a role. She’ll allow Arnott to get some rest, and she’ll be an insurance policy against foul trouble.
Niah Spratt and Key’erah Wagner (ACL) are working their way back from knee injuries, but they’ll contribute.
South got off to a fine start this season with three lopsided wins. All were against programs that are down, but South averaged 63 points and looked like an exciting, fast-paced team.
“We’ve had a little success,” Davis said. “So it’s going to come down to do we get complacent and settle for being pretty good or do we keep working our tails off to get better. I believe this team wants to get better.”
South won’t rule the SPC this season, but rising to the top half of a pretty good league is a realistic goal.
Carson, Robinson, Cox Mill and Central Cabarrus will likely be better than they were last season, while Hickory Ridge and West Rowan should be good again.

Players to watch:
Janiya Downs, 5-10 soph. — A floorleader as well as a scorer, Downs topped 20 points 10 times as a freshman. She’ll be one of the best in Rowan County and the SPC.

Tazah “Z” Hardin, 5-6 Jr. — Hardin has quick feet and quicker hands. She’s just about certain to lead the county in steals — and layups.

Riley Corriher, 5-5 Jr. — Corriher can shoot. She scored in double figures five times last season with a high of 17 points.

Whitley Arnott, 5-10 fresh. — A pitching prospect for the Raiders, Arnott will be counted on to rebound and to finish inside.
“She gets in there and bangs,” Davis said. “She doesn’t play like a freshman.”

Brooke Lowery, 5-7 Jr. — She’s a gym rat who can shoot and defend.
“She developed a lot on the jayvee team last year,” Davis said. “She’s a very aggressive defender.”

From staff reports West Rowan receiver Kortez Weeks is one of the replacements for the North Carolina team for Saturday’s... read more