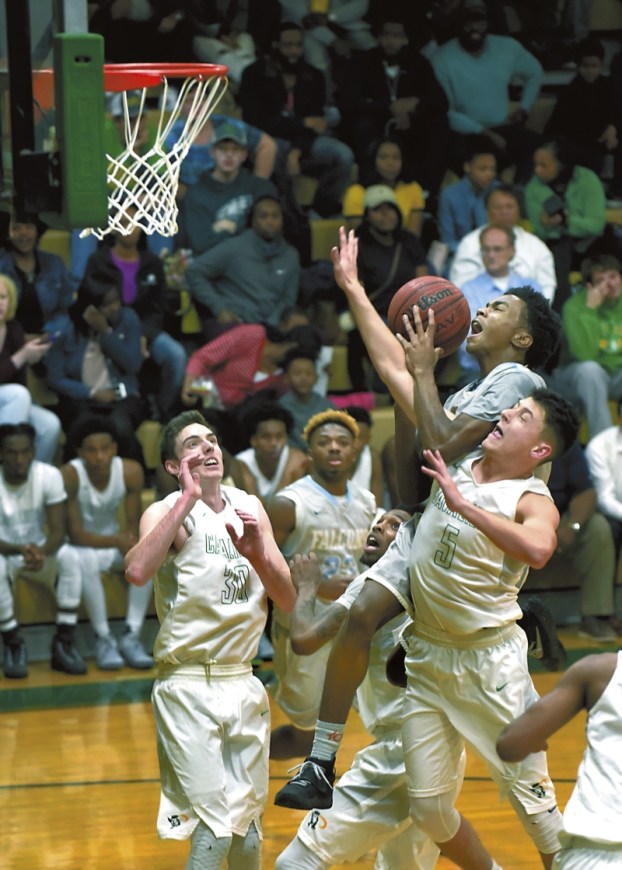 Prep Basketball: Kure, Mauldin too much for Mustangs

MOUNT ULLA — West Rowan newcomer Darius Kure made four 3-pointers in the first five minutes, and the Falcons knocked out visiting East Rowan early on Tuesday for a South Piedmont Conference victory.
West breezed, 75-53, with Kure (27) and 6-foot-8 junior Caleb Mauldin (26) combining to match the point production of East’s entire squad.
East (0-7, 0-6 SPC) is nowhere near as bad as its record, but the Mustangs have been in the wrong place at the wrong time frequently so far this season. West (3-2, 3-0 SPC) doesn’t always shoot accurately from outside, but on this night, Kure, who entered the game averaging 11 points, couldn’t miss from the right wing.
“I haven’t seen Darius get that hot for a while,” Mauldin said with a smile. “And even when he missed, we were able to get some offensive rebounds.”
Kure shot the Falcons into a quick 14-2 lead, but it’s not like West coach Mike Gurley was relaxing.
“We got up on East early last February and they came back and beat us in our gym,” Gurley said. “We knew we had to keep playing, and we did a good job of pressuring the basketball. We played a solid game.”
West led after a quarter, 21-9, even though East had controlled the paint with its young big men, 6-foot-6 sophomore Elton Hooper and burly but mobile 6-4 freshman Brandon Jefferson. East got the ball inside for point-blank attempts, but it shot 3-for-12 in the quarter.
“Those two young guys, they’re going to be really good,” Gurley said. “If Jefferson grows to 6-6, he’ll be a Division I football or basketball player.”
Kure made his fifth 3-pointer in the second quarter, and he was starting to get assistance from Mauldin, who was blanked in the first quarter. Mauldin enjoyed a 10-point quarter and didn’t miss a shot.
“I finally got some shots to drop in for me tonight,” said Mauldin, who has scored 938 career points. “And I hit my free throws. I was happy with how I played and how the team played.”
East cut West’s lead to 26-16 in the middle of the second quarter when Lucas Morton made a 3-pointer as he was fouled, but when West reeled off the next 12 points in a row it was just about over.
West, playing without late Shrine Bowl addition Kortez Weeks, led by 25 points at the break, 43-18.
“We’re all super-pumped for Korty Weeks getting to play in a really big football game,” Gurley said. “Korty is a rock for us, but we didn’t dwell on not having him. Armoni Hogue gave us a lot of defense as we built that nice lead, and Darius Kure… well, I guess Darius isn’t a secret anymore.”
East played its best early in the second half, getting the ball low to Hooper and scoring on four straight possessions. But the Falcons weren’t rattled. Kure got a bucket on a tip-in and then made a slick pass to Mauldin for an easy two, and the Falcons started rolling again.
Guard Bryson Sprinkle had seven driving points for the Mustangs in the final quarter, but it was too little, too late. West led by 29 points with five minutes left, as Gurley subbed early and often.
Mauldin shot 10-for-13 from the floor and 6-for-6 from the line on a very efficient night and added 11 rebounds. Kure shot 11-for-20. Their stellar marksmanship helped the Falcons shoot better than 50 percent as a team.
East shot 37 percent. Jefferson had 13 points, while Hooper and Morton scored eight each.
West plays again tonight, hosting North Rowan in a non-conference rematch. North, with huge scoring games from Henderson Lentz and Joe Scott and a lots of rebounds by Brevin Goodlett, won by two points in Spencer.

By Mike London mike.london@salisburypost.com SALISBURY — There was a time when “freak” wasn’t a complimentary term, so Mars Hill women’s... read more