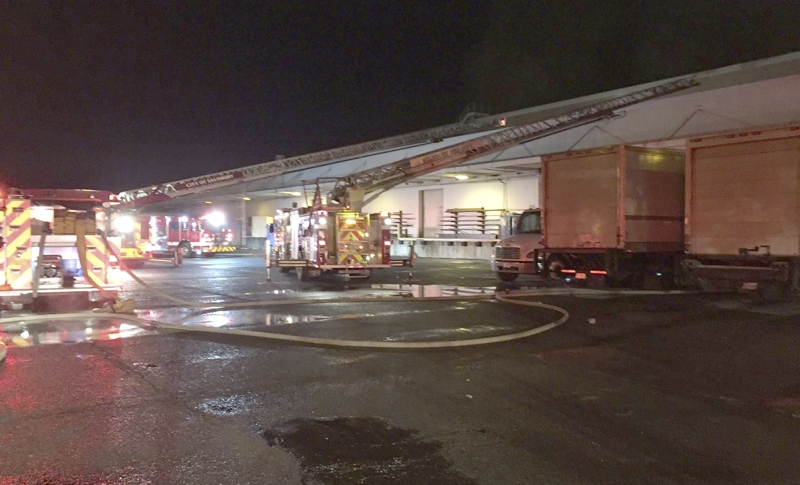 Multiple fire departments responded to this overnight fire at Walk-On Product Inc., 1170 Chuck Taylor Lane. Fire officials say the sprinkler system contained the Sunday night fire to one portion of the building, but did fill it with lots of smoke. No official cause has been determined as of yet. Submitted photo/Salisbury Fire Department

Multiple fire agencies responded to the fire after receiving a call around 9:20 p.m. Sunday at Walk-On Products Inc., 1170 Chuck Taylor Lane, located off Peeler Road. The fire was dispatched as a fire alarm.

City Fire Marshal Terry Smith said the reason for the three-alarm fire was because the building is so big they needed more resources.

He added that the sprinkler kept the fire in check, but it also created so much smoke that it made it a little difficult for fire personnel who were inside the structure.

The sprinkler also helped contain the fire to one area of the building. The building is large, Smith said, but the fire was only in a small portion of it.

Smith said he and another fire investigator would likely spend much of the day at the business as company personnel use forklifts to remove a lot of carpet foam before fire investigators can go inside.

The last time employees were inside the building was Friday, Smith said.

The fire was under control around 1 a.m. No injuries were reported. Fire officials say there was minor damage to the structure. The cause has not been determined.

The company rebonds carpet padding, supplies carpet padding for homes, commercial properties and the automotive industry, according to its website.
The company also manufactures cow mats, archery targets, foam buns and other foam products. It was founded in 2002.

Spencer Board of Aldermen to consider golf cart ordinance