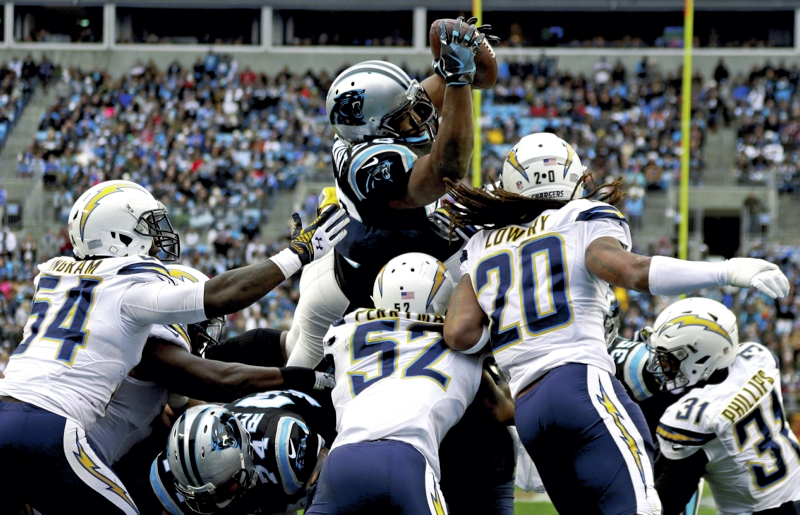 Carolina Panthers' Jonathan Stewart (28) reaches the ball over the goal line for a touchdown against the San Diego Chargers in the first half of an NFL football game in Charlotte, N.C., Sunday, Dec. 11, 2016. (AP Photo/Bob Leverone)

CHARLOTTE (AP) — Linebacker A.J. Klein knows that realistically the Carolina Panthers don’t have much of a shot to make the playoffs.

But he said that isn’t going to keep this team from trying.

That was evident Sunday as Carolina’s defense forced a season-high five turnovers by Philip Rivers, recorded five sacks and a crucial fourth-quarter safety in a 28-16 win over the San Diego Chargers.

“I think it shows that we’re not going to just roll over,” said Klein, who had a sack and forced fumble. “It shows that we’re going to fight and we have a lot of high character people on this team. We will keep fighting until the last game and wherever the chips fall, that’s where they fall.”

Cam Newton was a pedestrian 10 of 27 for 160 yards with one touchdown pass and one interception for Carolina (5-8), which snapped a two-game losing streak and kept its slim playoff hopes alive. Jonathan Stewart ran for 66 yards and a touchdown and Graham Gano had four field goals.

But it was Carolina’s defense that set the tone early — and later put the game away.

Despite playing without middle linebacker Luke Kuechly and defensive end Charles Johnson, the Panthers had four sacks on Rivers and forced three turnovers in the first half to build a 23-7 lead.

“I thought (defensive coordinator) Sean McDermott had a real good game plan,” Panthers coach Ron Rivera said. “I like the way he called the game. He had some timely pressures and he used everybody — bringing corners and nickels and the safeties. I thought early on we kept Philip off balanced.”

One of those turnovers, a strip-sack by Kawann Short, proved extra costly for the Chargers (5-8). Running back Melvin Gordon, who came in averaging 117.5 yards from scrimmage and had scored 12 touchdowns, was carted off with a hip injury after his left leg twisted under a pile while attempting to recover the loose ball. He did not return.

Coach Mike McCoy had no update on the extent of the injuries after the game.

Rivers, who played at North Carolina State, finished 21 of 39 for 236 yards with three interceptions and two touchdown passes in his homecoming game. He also fumbled twice on sacks.

“There were times I tried to do too much today,” Rivers said. “That hasn’t been the case in the past couple of games. I know better than that. At the same time, I don’t want to stand back there and throw balls away and lose 35-3. It felt like that was the way it was going. That’s no excuse to make bad mistakes and bad turnovers, but those were just decisions I made today.”

“Five sacks, five turnovers — that makes playing offensive football a lot easier, so hats off to those guys,” Olsen said.

Despite trailing 26-16, the Chargers seemed to seize momentum briefly with 11 minutes left in the game when Trovon Reed intercepted Newton in the end zone and appeared to take it back 99 yards for a touchdown. But instead of it being a three-point game, officials ruled Reed was down by contact at the 3-yard line before ever got going.

Three plays later, Mario Addison sacked Rivers in the end zone for a safety and the Chargers never threatened again.

Bosa, the No. 3 pick in the draft, left in the second quarter with a neck injury after a sack on Newton. Bosa didn’t appear to have his head up as he collided with the 6-foot-5, 245-pound Newton in the pocket and his neck snapped back.

Cornerback Craig Mager also left in the first half with an elbow injury and did not return.

The Chargers could be in for a whole lot of changes this offseason, and players are beginning to realize that.

“It hurts, especially give the season we have had,” said wide receiver Dontrelle Inman, who had 71 yards receiving and a touchdown. “Like coach (McCoy) said, we have to all take a look in the mirror and see if guys really want to play.”

The home crowd held its breath when Newton left the game late in the third quarter after taking a hit to the side of the head from defensive end Corey Liuget. But Newton returned to the game one play later.

Stewart had a highlight reel 20-yard run when he somersaulted over Chargers defender Jahleel Addae, landed on Addae’s ankle with his helmet and somehow kept his balance to pick up another 5 yards.

Finally, a win vs. west

The Panthers got their first win against an AFC West team after losing to Denver, Kansas City and Oakland earlier this season.