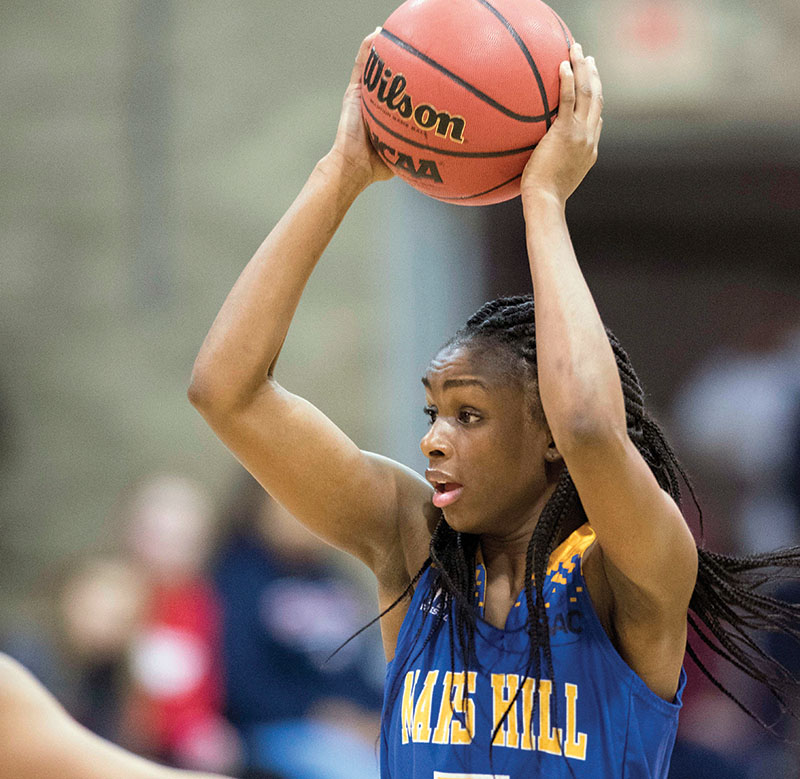 SALISBURY — There was a time when “freak” wasn’t a complimentary term, so Mars Hill women’s basketball coach Jenny Finora is a little hesitant to use it.
But there are only so many adjectives that can adequately describe Mars Hill freshman Aliyah Farmer.
“Aliyah is a freak athlete,” said Finora, who starred at the University of Kentucky in her playing days. “She’s just athletic as all get-out. So athletic it’s unbelievable. She can jump out of a gym like no one I’ve ever seen.”
The top two rebounders in the South Atlantic Conference are Lincoln Memorial’s Josey Harding, who is 6-foot-2, and Wingate’s Marta Miscenko, who is 6-4. Third in rebounding in the SAC at 10.8 per game is Farmer, who stands 5-8.
Nationally in Division II, the only rebounder in the top 30 who is shorter than 5-foot-10 is Farmer, a North Rowan High graduate. There’s just one other 5-8 person in the top 50. That’s Mount Olive senior Kira Jones.
Farmer leads the SAC in offensive rebounds with 40 in nine games.
Quick, fast, springy and wiry-strong despite a slim frame, Farmer played on the North Rowan varsity four seasons. She averaged 7.2 points her first two seasons, but she jumped to 12.2 as a junior. Then she blossomed into one of the county’s best players as a senior when she averaged 16.3 points and 11 rebounds.
“Mars Hill saw me playing in an AAU game and they started recruiting me,” Farmer said.
Mars Hill assistant coach Lisa Lee, an All-American in 2005 and 2006 at the University of Charleston in West Virginia, is the one who spotted Farmer and successfully brought her to the mountains, north of Asheville.
Farmer’s offensive skills were limited early in her prep career, but she was taking — and making — jump shots by the time she was a senior and her ballhandling and passing had improved by leaps and bounds. Personality-wise, she’d transformed from silent to leading the team in hugs and high-fives.
Still, Farmer was essentially a 5-foot-8 post player, so there were plenty of doubts she could make a successful transition to college basketball in a very competitive D-II league.
“The coaches at Mars Hill worked me very hard before the season and we worked on everything because they want me to be able to play anywhere on the floor,” Farmer said. “My goal as a freshman was just to earn playing time. I didn’t have any idea I could be a starter as freshman — but there I was starting my first college game.”
Most questions about Farmer disappeared after that first official college game. She had 17 points and 13 rebounds in a 71-70 win against Lees-McRae. Her debut included making a tie-breaking jumper with 1:57 left to play.
“Aliyah is such an exciting player, and she’s been a huge addition to our team,” said Mars Hill senior guard Paige Chavis, the former Central Davidson High star who is one of the SAC’s top scorers. “She knows the game so well and she’s bouncing around like that Energizer Bunny.”
Five days after the Lees-McRae game, Farmer had 10 points and 16 rebounds against North Greenville.
Farmer kept going. She had eight points and 17 rebounds against Limestone. On Nov. 22, against Anderson, one of the SAC’s strongest teams, Farmer produced 19 points and 13 rebounds.
“I’ve got a lot to work on, but I’ve learned I can play with most people,” Farmer said. “Even against Division I girls (Mars Hill lost to Furman), I believe I can play with them.”
Farmer will have adjustments to make. Word gets around. College coaches study film. Teams will start preparing for her, and when teams gameplan for Mars Hill (2-7), the priorities are going to be taking the 3-point line away from Chavis and boxing out Farmer. Maybe boxing out Farmer is going to be at the very top of the list.
On Saturday, Catawba coach Angie Morton had her team well-prepared. The Indians knew Farmer would be aggressive and they were ready to take charges when she attacked the rim and ready to get a body on her when she crashed the glass.
Farmer scored Mars Hill’s first two points, sticking back a missed 3-pointer by Chavis, but with 7:09 left in the first quarter she was whistled for an offensive foul. Her second foul came less than two minutes later when she lost a rebound to Catawba guard Serena Brown. Then with six seconds left in the quarter, Farmer smacked Brown again for her third personal and had to sit down.
In the second quarter, Farmer made a brief return to the floor at Goodman Gym, where she was a big part of North Rowan’s Christmas tournament triumph last December. But she was called for her fourth foul immediately when Alexis Newbold boxed her out when she tried to grab an offensive board.
“Coach knew I was playing at home and that I really wanted to play,” Farmer said of her fourth foul. “We were behind so much. We didn’t have a lot to lose.”
Farmer, who recently posted a double-double at home in a win against Livingstone before fouling out, was able to play most of the fourth quarter against Catawba with four fouls, but she finally exited with her fifth personal with 1:28 remaining. Farmer, who averages 10 points per game, finished with her quietest college outing with three points and seven rebounds.
“I really did want to do well at home,” Farmer said. “It just didn’t work out for me with the fouls. I couldn’t play as aggressively as I wanted to.”
But for the most part, life is going smoothly. Farmer, whose career goal is to become a lawyer, said it’s cold, but she’s enjoying the mountains. She’s playing 30 minutes every night and is one of four players in the SAC averaging a double-double.
“We’re struggling some with her,” Finora said. “But we’d really be struggling without her.”