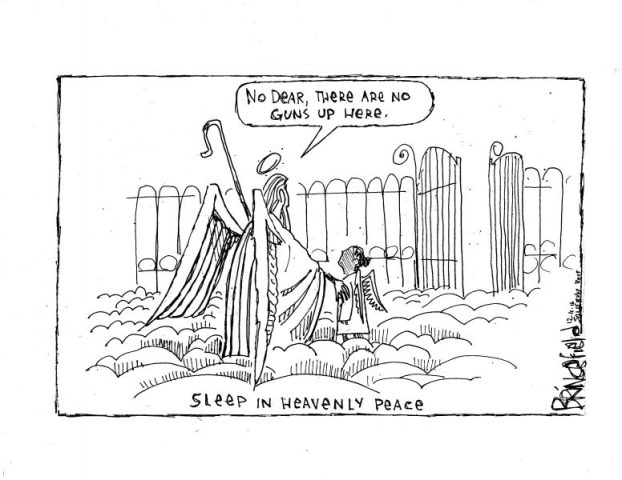 Young men have been shooting at each other in town for years, and people in the safer neighborhoods of Salisbury have come to shrug it off. The loss of life that should spark outrage instead makes us jaded. The police say “the shooter and the victim were known to each other” or this was “not a random shooting.” That sounds like code for “gangs are retaliating against each other.”

Every killing sends out ripples of grief and regret. The victims leave behind heartbroken families and children who will grow up without fathers. Yet we tend to think these men somehow bring it on themselves by being part of the gun violence that rules their world. Live by the sword, die by the sword. There they go again.

Then a child gets killed, and everything changes.

Seven-year-old A’yanna Allen was asleep in bed at her grandmother’s house when bullets tore through the windows and walls.

It was 4 o’clock in the morning, about three hours after gun shots in the parking lot of Firewater Lounge left a young man dying on the pavement. Twenty-two-year-old Sharod R. Mathis of Spencer has all but been forgotten in the upheaval of the past week.

With great hesitance, police will say there may be a connection between the Mathis killing and A’yanna’s. Police do not want to show their hand. And they do not want to talk about the possibility that gangs might have been behind the weekend’s bloodshed.

In 2007, after 13-year-old Treasure Feamster was killed in gang crossfire in Salisbury, the city sponsored a gang summit. The gang connection was clearcut. This year, it’s hard to get police to say “gang.” Is it that authorities are unsure whether gangs really are involved? Are they worried about the city’s image? Or are they reluctant to give gang members the notoriety they crave?

They are just criminals, after all. Common, law-breaking, life-taking criminals.

Sadly, violence was not new to A’yanna’s family. Her father was shot to death on Christmas Day, 2009, six months after A’yanna was born.

No one expects a 7-year-old girl to follow in her father’s footsteps that way.

Surely A’yanna was not the intended target.

Who did the shooter or shooters believe was in that bedroom?

Was this to be the ultimate payback, to shoot an innocent child and her sleeping grandmother, or was it a mistake? Does the shooter feel any remorse?

There are so many questions. Yet the people who know the answers won’t come forward. That’s been the case for years. A code of silence rules the streets.

Are the people who could identify the shooter (or shooters) too afraid of retribution if they speak up? Maybe they just don’t care.

Silence lets the shooter go on to kill again. Whose child might be hurt the next time?

In May 2015, an East Spencer man wrecked his car within sight of the hospital. He had been shot, and with him in the bullet-riddled car were three young children, including a 4-year-old who also had a gunshot wound.

The man died. Fortunately, the boy survived, but now all those children have experienced gun violence firsthand.

Whose child or father or friend will be next?

A’yanna was in the second grade.

Her kindergarten teacher cried when talking to reporters about A’yanna  — “a  sweet, loving and smiling little girl.”

What was your life like in second grade? Did you worry about guns?

I remember the guns my dad used when he went hunting. The sharp smell of the stuff he used to clean his shotguns comes back to me, just thinking about it. Making sure they were unloaded was a big deal, but otherwise there was no need to fear guns at the age of 7.

That was a different time, and I lived — and still live — in a world that is very different from A’yanna’s.

This time of year, 7-year-olds should be nagging grownups with questions about Santa Claus and talking about what they want for Christmas. They should be telling knock-knock jokes and reading “Pete the Cat.”

They should be giving out hugs to anyone who smiles at them.

And, after trying to stay up later than they should, 7-year-olds should be snuggling up in bed for a good night’s sleep — and waking the next morning to grow and play and love some more.

She will forever be 7-year-old A’yanna Allen, the little girl who was shot while she was sleeping and died. She deserved better.

Why did this happen?

As Mayor Karen Alexander has said, if you know something, say something.

Please — before someone else’s child gets killed.

“If you know something, say something.” — Salisbury Mayor Karen Alexander, Announcing a joint city-county reward of $20,000 for information... read more