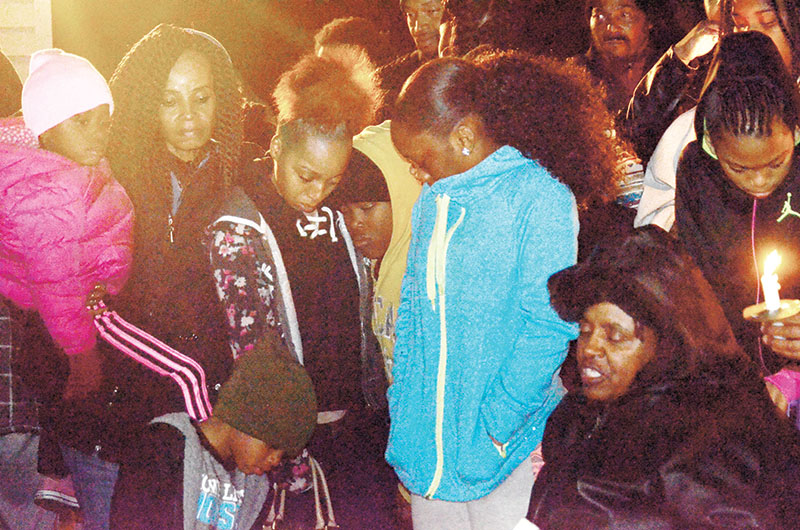 The family of 7-year-old A'yanna Allen stand huddled together during a candlelight vigil Saturday at 200 Harrel St. where the child was shot and killed a week ago. The girl's mother, center, Shequita Woodberry, holds onto her children, as her mother, far left, April Woodberry, and A'yanna's paternal grandmother Shirley Robinson, bottom right, look on. Shavonne Walker/Salisbury Post

SALISBURY — Despite the below freezing temperatures, a crowd of people huddled together on the lawn of 200 Harrel St. where a week ago, the life of 7-year-old A’yanna Allen was cut short by gunfire as she slept in a bedroom.

Her family says they want justice and answers into a senseless crime that claimed the second-grader’s life, but Saturday night they were enveloped with love from the community as dozens gathered for a candlelight vigil in the child’s honor.

The vigil was the combined idea of Chariel Dye and Jamella Martin, both of whom have organized community events and activities.

“I felt like we really needed to make a statement that we are doing this in remembrance of her. She was a 7-year-old innocent baby,” Dye said.

Martin said this was a chance to also say to the community “let’s stop this. Not one more child, not one more person,” has to die.

Dye said they first checked with the family of A’yanna Allen to make sure they were OK with a vigil at the house. Martin obtained a permit on Friday and was grateful to Salisbury Police Capt. Brian Stallings, who worked with her to get it and even paid for the permit.

During the vigil, Dye took time out for a moment of silence for A’yanna Allen, Sharod Mathis and the other unsolved murders in the city.

Mathis, 22, was shot outside Firewater Restaurant and lounge just three hours before A’yanna was killed. Police say an argument ensued in the restaurant parking lot before he was shot. He was taken to the hospital by vehicle and later died.

“My mind was on freeze. I couldn’t cry. I was in shock,” said ShaTaira Bailey of learning about the death of her cousin, A’yanna Allen.

Bailey brought her two daughters to the vigil and said, as a member of the family, they really are appreciative of the community for their support and organizers for putting together the vigil.

Pastor Bradley Taylor of Outreach Christian Ministries led those gathered in prayer. He then asked the crowd “when is enough, enough?”

He encouraged anyone with information to speak up about what they know.

“If we can touch those around us then we can make this community better collectively,” he said.

Taylor issued a challenge to those gathered to do more for the youth, such as mentor them.

“We’ve got to do more. The community needs you,” he said.

“If you want to see a better Salisbury, be the change,” Jones said.

“We are all together tonight, but we should be like this all the time,” he said.

“Show me your friends and I’ll show you your future. Let’s be together on everything. Encourage our young kids,” Jones said.

Shequita, overcome with emotion, said she was unable to speak to those assembled. She held onto a poster-sized picture of A’yanna.

Robinson sat in a chair still using crutches after being shot in the leg during the Dec. 4 shooting.

Robinson said her granddaughter liked giving hugs and was a sweet child. She also shared memories of the young girl.

Shanice Graham clutched a candle that reflected off the white T-shirt she wore with a picture of A’yanna Allen’s face on it.

Graham, a single mom of six, said her oldest is the same age as A’yanna and the two girls were in the same class.

“It hurts my heart to see another single mom go through this,” Graham said.

Greg Robertson, a cousin of A’yanna, said this ordeal has really torn up his family.

“It’s sad because it’s just so much violence going on. She didn’t have a chance to grow up. It’s sad to even have to go through,” Robertson said.

The support of the community means a lot to him and his family, he said.