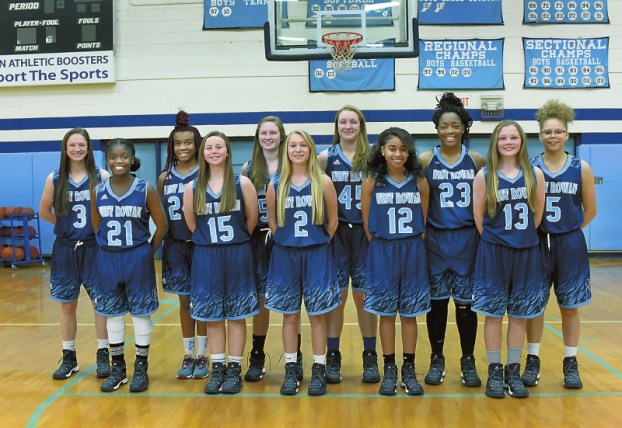 One season after running the table in the South Piedmont Conference and advancing to the Round 3 of the 3A state playoffs, the Falcons are sporting a new look — but employing the same formula.

“We’ll take our bumps,” upbeat coach Ashley Poole forewarned before a recent practice. “But I definitely think it’s a playoff team. We’ve got scorers, we’ve got shooters, we’ve got quickness on defense. If we don’t finish top three (in the league) I’ll be disappointed.”

Poole has a good feeling about West, which enjoyed a 19-game winning streak and came within a missed free throw of reaching last winter’s fourth round. Let’s find out why.

Never mind that five seniors graduated. But keep in mind that four freshmen will bypass the junior varsity level and jump straight from middle school to varsity. “They’ll have to grow up quick,” said Poole. “They’ll need more mental toughness, but they can all play. That middle school team lost only two games in two seasons.”

Suffice to say Poole has one eye on this season and the other glued to the future. Two starters return — junior Egypt Alexander and sophomore Mary Sobataka. Alexander, a 5-8 forward, averaged a team-best 17.6 points-per-game last season and inherits the throne previously occupied by 1,000-point scorer Khaila Hall. “Playing with Khaila gave her the confidence to be a dynamic scorer,” Poole said. “This year she has to score. She has to be the one.”

Sobataka is a quick-learning, 5-6 guard who can drive, shoot the 3 and defend. “She has great hands,” Poole noted. “And she’s quick. She’ll be able to lead our transition game.”

Senior Miyanah Pruitt is expected to start at point guard. Poole described her as “quick as lightning and a great defender,” but added, “She has to stay out of foul trouble. The guards who will interchange with her are all freshmen.”

Among them is Taylor Poole, the coach’s daughter. She’ll need to adjust to the speed of the game a year after earning MVP honors in Rowan County’s middle school tournament. Another key player is Abigail Wilson, a 5-11 freshman forward and daughter of West assistant coach Wendy Wilson. She spent the summer improving her footwork and rebounding prowess at a number of area camps.

Perhaps the Falcons’ X-factor is junior Shyann Vaughters, a 5-7 guard who provided burst and energy off the bench last season. Poole points to a mid-season SPC victory to illustrate. “One game we were down by eight or 10 and she came in and scored 10 straight points,” she recalled. “She couldn’t miss.”

It begins as a tough-to-figure season for West, which has already rescheduled games against Northwest Cabarrus and South Rowan due to the school’s extended football season. Poole is eager to go, but will use the time to improve the product in the gym.

“Still have things to work on,” she said. “Like last year when we figured everything out.”

Egypt Alexander, junior forward — All-conference, all-county and a headache to defend last year. She’s more Janice than Jackie O., played AAU showcase ball over the summer in venues like Atlanta, Nashville, Washington and Myrtle Beach. There was no off in her off-season.

Mary Sobataka, sophomore guard — A second-team all-county selection, she played in every game and averaged 9.4 points-per-outing as a freshman. Reached double-figures 16 times, so expect more ju-ju from her.

Khara Fesperman, senior guard — A role-player and a good one. Returning lettermen who has displayed more confidence. “Last year when she had the open shot, she wouldn’t take it,” Poole said. “Now she will.”