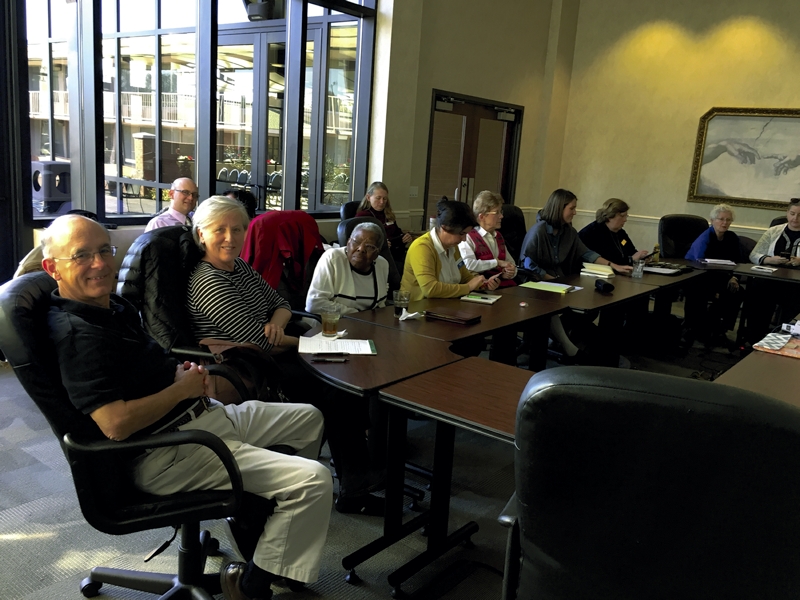 Some of the participants gather to talk

In a time of fear and mistrust of refugees and immigrants, what is expected of Christians?

For the North Carolina Council of Churches, the answer is clear: Christians must reclaim their identity as a people of welcome and take real action to get to know and support their neighbors, particularly those who may face discrimination from the larger community.

Based in Raleigh, the N.C. Council of Churches is a statewide ecumenical organization with the goal of promoting Christian unity and working towards a more just society.

To further that goal, the council’s Christian Unity committee, with support from Lutheran Services Carolinas, sponsored a workshop Dec. 2 in Salisbury called “Getting to Know Our Muslim Neighbor: Tools for Interfaith Community Building and Theological Reflection.”

Held at the Aymer Center on the campus of Hood Theological Seminary in Salisbury, the workshop was attended by Lutherans, Presbyterians, Roman Catholics, Moravians and United Methodists, both clergy and non-clergy, from Rowan County, Raleigh, Greensboro, Burlington, Winston-Salem, Reidsville, Concord, Hickory, and Columbia, S.C.

In her opening address, Jennifer Copeland, a United Methodist minister and the executive director of the North Carolina Council of Churches, spoke of the history of the council, which dates back to 1935 in Durham, N.C.

“These were forward-thinking people,” she said of the organization, adding that the council has traditionally called people to follow “just a little more closely in the footsteps of Jesus,” she said, whether it’s working for equality for women in the workplace or strengthening relationships between Christians and Muslims.

“We’re going to have to stand up for what we believe,” Copeland said. “It’s just that time in our history right now. We cannot stand by and say that somebody else will carry the banner. “

The Rev. Dr. Pierson Shaw, co-chair of the council’s Christian Unity committee and a faculty member in the Religion Department of Lenoir-Rhyne University, emphasized the Biblical foundation of caring for the stranger by sharing scripture.

Shaw explored a well-known parable that highlights the Christian injunction to welcome the other. In the New Testament, Jesus explains to a man that to inherit eternal life, one must love the Lord and his neighbor as himself. The man then asks Jesus to clarify: Who is my neighbor?

In response, Jesus offers the parable of the Man Who Fell Among Thieves (often called the parable of the Good Samaritan). Through the parable, Jesus is pushing the parameters of the idea of “neighbor,” Shaw says, inviting us to see that the one least likely to be considered a neighbor is, in fact, our neighbor.

“Our hope,” Shaw said, “is that we might expand the circle of those whom we regard and consider to be our neighbor, and that we might assist our larger communities (to) see how receiving the Muslim sojourner and refugee in our midst is part of our Christian vocation to which we were called in baptism.”

Christians welcome the stranger not to be nice or polite but because it’s who we are as Christians, said the Rev. Whitney Wilkinson, co-chair of the council’s Christian Unity committee and pastor of Cameron Presbyterian Church. Welcoming the other is also how we all find a home in the world, she said.

Wilkinson emphasized that the workshop was not attempting to speak for Muslims. “What we’re doing here,” she said, “is trying to understand who we are, and our engagement with ‘the other’ is a living out of our Christian identity.”

Bedrija Jazic shared a story of support she received from a neighbor after Jazic’s family moved to South Carolina around several decades ago as refugees of the war in Bosnia.

“The neighbor that welcomed my child and acted as a grandparent at her school (on Grandparents’ Day) made a difference,” she said. “And that pushed me to where I’m at right now. To continue to welcome people in.”

Jazic is the executive director of Refugee Resettlement for Lutheran Services Carolinas, which has resettled more than 12,000 refugees in the Carolinas since starting its refugee ministry in 1979.

Participant Alberta Hairston of Greensboro, a former board president of the N.C. Council of Churches, noted that as a black Roman Catholic from the North who has lived in the South for man years, she understands the feeling of being “the other.” She cited Pope Francis’ exhortation that we need to focus on what we have in common rather than what separates us.

Dianna Wright of the Salem Presbytery in Clemmons shared resources and tools for those engaging in interfaith work. She advocated simple curiosity for those seeking to support their neighbors.

“Wanting to understand neighbors and their faith traditions will be received with gratitude,” she assured participants. “You have to be willing to put yourself out there, stepping out beyond the fear or the perceived danger. You have to risk developing a relationship.”

To learn more about the North Carolina Council of Churches, go to www.ncchurches.org.

Katie Scarvey is a communication specialist for Lutheran Services Carolinas.