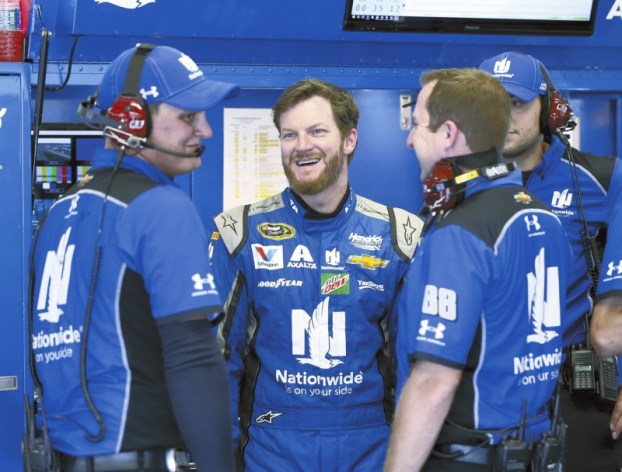 FILE - In this June 30, 2016, file photo, Dale Earnhardt Jr., second from left, chats with his crew in the garage during NASCAR Sprint Cup auto racing practice at Daytona International Speedway, in Daytona Beach, Fla. Earnhardt, who missed the final 18 races of last season because of a concussion, has been medically cleared to return next year. Hendrick Motorsports announced Thursday, Dec. 8, 2016, that Earnhardt will take part in the season-opening Daytona 500. (AP Photo/Wilfredo Lee, File)

Earnhardt Jr. says health is top priority as he prepares for return

CHARLOTTE (AP) — It took less than four laps for Dale Earnhardt Jr. to feel back at home in his race car. His test this week at Darlington Raceway was the final hurdle for NASCAR’s most popular driver to earn clearance to compete next season.

The test ended months of speculation — should Earnhardt retire? Was the risk of suffering yet another concussion too great? — and a detailed medical plan helped get him back on the track when many thought he should just step away for good.

“When you get something taken away from you, you certainly realize what it’s worth,” Earnhardt said Friday. “I’m feeling recharged and energized about coming back ready to race. I’ve got a lot left in the tank.”

And he wants to make something perfectly clear: Earnhardt would not be climbing back into the No. 88 Chevrolet if his doctors had not assured him that he’s healthy and his past concussion history hasn’t put him at a heightened risk of permanent injury.

“I have a personal responsibility to myself. My health is number one. I am not going to take any unnecessary risks with my health,” he said. “I wouldn’t be coming back to the seat and being excited to drive if there was any additional risk, other than the typical risk that every driver faces. I feel confident in what my doctors are telling me … in me being able to withstand the normal wear and tear and getting into that unfortunate accident from time to time.”

Earnhardt’s lengthy history with concussions flared again this year after a crash at Michigan in June. He missed the final 18 races of the season and spent that time in intensive therapy meant to first help him control vision, balance and nausea. That lengthy process completed, his doctors focused on getting him ready to drive a car again, and it happened Wednesday at the South Carolina track considered one of the most demanding in NASCAR.

He admitted to a sleepless night before the test, and an anxiousness to get inside his beloved Chevrolet the moment his feet touched the ground at Darlington. With neurosurgeon Dr. Jerry Petty on site, the Hendrick Motorsports team eased into the session.

Earnhardt started with 15-lap runs, then climbed from the car to be assessed by Petty. As the day went on, his vision and balance were not only checking out fine, but improving after every run. Soon he was up to 30 laps at a time, he felt up to speed — and he felt ready to race.

His clearance came as a boost to Hendrick Motorsports, which is already riding high after Jimmie Johnson’s record-tying seventh championship. Hendrick made it through the second half of the season with a combination lineup of Jeff Gordon and Alex Bowman, and he insisted the sponsors who pay millions of dollars for Earnhardt to be in the car were concerned only with the driver getting healthy.

Although Earnhardt will test again before the season begins at Phoenix — and he’s got a wedding to his longtime girlfriend on Dec. 31 — he won’t actually race until the events leading into February’s season-opening Daytona 500. He will skip the exhibition race that kicks off Speedweeks at Daytona, not as a health precaution, he said, but because Bowman earned the right to race the car by winning the pole at Phoenix in November.

Earnhardt has worked closely the last few years with Dr. Micky Collins from the University of Pittsburgh Medical Center Sports Medicine Concussion Program. It’s been Collins who first got Earnhardt healthy, then helped him get back into competitive condition.

Collins has deemed Earnhardt healthy and ready to go, but Earnhardt will continue to work on many of the exercises he’s received from the doctor for the sake of strengthening himself.

“This is from my doctor’s mouth — I had to work really hard to be a human being again, to be normal again. The distance between just being myself and just being a race car driver, that was going to be another handful of exercises,” he said. “His advice was if I wanted to continue the exercises, it would only continue to strengthen the system. Hell, maybe this is something I could have been doing all along.”