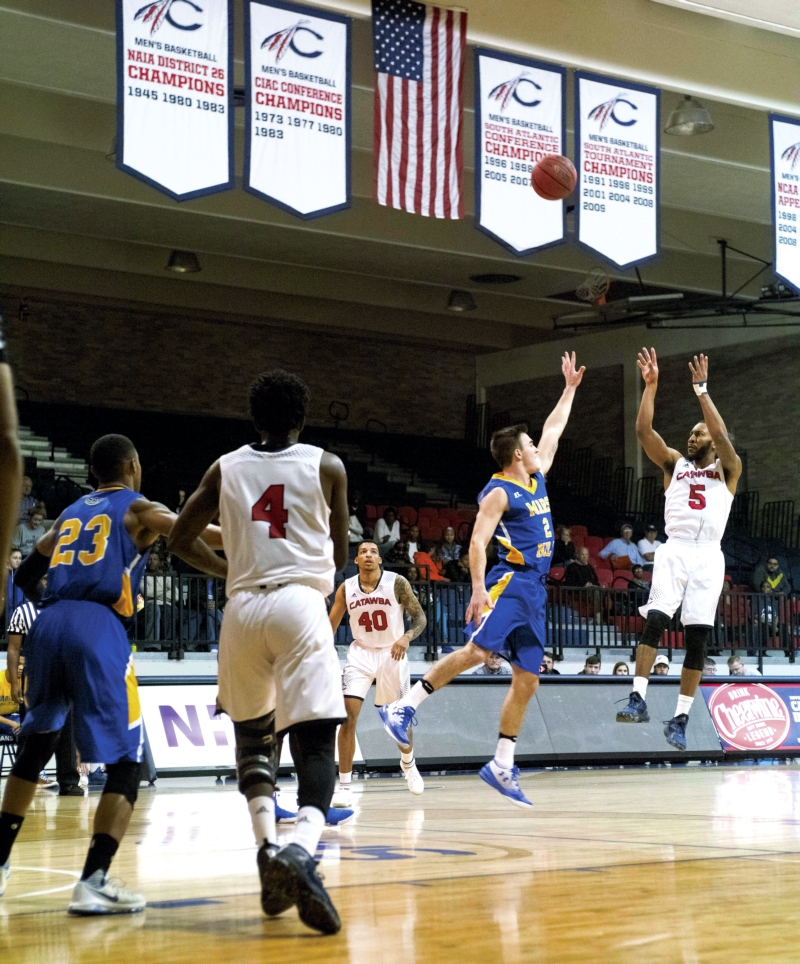 SALISBURY — Catawba’s K.J. Arrington scored his 1,000th career point on a free throw, and it turned out to be a “grand” afternoon for all the Catawba Indians.
Arrington helped Catawba win Saturday’s South Atlantic Conference contest about as easily as a league game can be won, cruising in the second half and thrashing Mars Hill, 90-70.
“One of the stat guys told me I was close to 1,000, but I didn’t pay any mind to it,” Arrington said. “I was just focused on getting the win because 1,000 doesn’t mean anything if you lose.”
There was never much danger of Catawba losing once the Indians rallied from the 10-2 hole they dug at the start.
Catawba coach Rob Perron opened with an odd starting lineup that included R.J. Robinson, Peyton Pappas and Jordan Barber. They are usually reserves.
“We had a different starting group because they kicked the starter’s tails in practice, and they earned the start,” Perron said. “Unfortunately, they didn’t play as well under the bright lights.”
Still, seven minutes into the game, the Indians were back even.
Arrington contributed the strongest flurry, taking over the game in the latter stages of the first half. It was 28-all, but then Arrington accounted for two layups, a jumper and a tip-in in a span of three minutes, as Catawba surged ahead, 38-31.
By halftime, the Indians (7-2, 2-2 SAC) led by double digits at 46-36.
Jerrin Morrison (12 points, seven rebounds) didn’t have a huge day, but when he knocked down back-to-back 3-pointers early in the second half to quickly boost that 10-point lead to 16, he also knocked out the Lions. They never got closer than 13 points the rest of the way.
“That was kind of a sixth-round knockout by Jerrin,” Perron said.
Arrington can put the ball in the hole from any angle, and despite injuries, he’s still a scoring machine. He had an efficient 26 points on Saturday, shooting 11-for-16 from the floor and 4-for-4 from the foul line.
Hard-driving Jameel Taylor added a steady 19 points on 8-for-12 shooting.
Arrington, Taylor and Troy Warren threw down dunks, but most of the postgame buzz was about Malik Constantine, a long-armed, athletic, 6-foot-6 redshirt freshman who is finally healthy after being injured very early last season and again in this preseason.
Constantine helped the Indians pull one out at Tusculum in their previous game when Arrington and Morrison were struggling and he looked imposing on Saturday despite failing to put away several, high-wire dunk attempts that would’ve brought down the house.
“He’s a high-energy big man,” Arrington said. “I was just talking to Jameel and Jerrin about him and we all agree. This guy will be a difference-maker.”
Constantine’s impact on Saturday was greater than his solid stat line — 10 points, seven rebounds and four blocks in 19 minutes. He was all over the place, changing Mars Hill shots and creating opportunities for his teammates.
“He only scored 10 points, but he probably also saved 10,” Perron said. “He helped us sustain a solid lead in the second half, and sustainability is a really good thing.”
Mars Hill (3-5, 1-2 SAC) had a schizophrenic shooting day, combining solid 11-for-30 3-point shooting with brutal 3-for-10 foul shooting.
Catawba shot an unacceptable 2-for-14 on 3-pointers, but the Indians smashed Mars Hill on the backboards, 54-31. That stat was closely linked to an overwhelming, 60-28 edge on points in the paint.
“We have enough scoring options that we should never have to settle for a bad shot and we drove the ball well today,” Perron said. “And when they helped on the driver, we were getting a lot of backside rebounds.”
Gilbert McGregor also aided Catawba’s huge edge on the glass. He had six boards, four offensive, while playing just four minutes. Constantine’s emergence will cut into the playing time of several of his teammates, but winning usually takes care of just about everything, and the Indians have won four in a row.
They haven’t faced any of the serious heat in the SAC yet — that appears to be Queens, Lincoln Memorial, Newberry and Carson-Newman — but there’s a spring in the step of the Indians and a confident look in Perron’s eyes. With Constantine added to three prolific scorers and a host of experienced role players, there’s a chance this team is ready to challenge the upper-tier teams.
“Constantine is constantly talking out there on defense,” Arrington said. “Communicating better on defense, playing better team defense, reacting more quickly, those are the things we’re working on.”
•••
Juniors Taylor (972) and Morrison (928) will be joining Arrington in the 1,000-point club soon. … Catawba hosts Johnson C. Smith (and former North Rowan star Malik Ford) on Monday at 11 a.m.