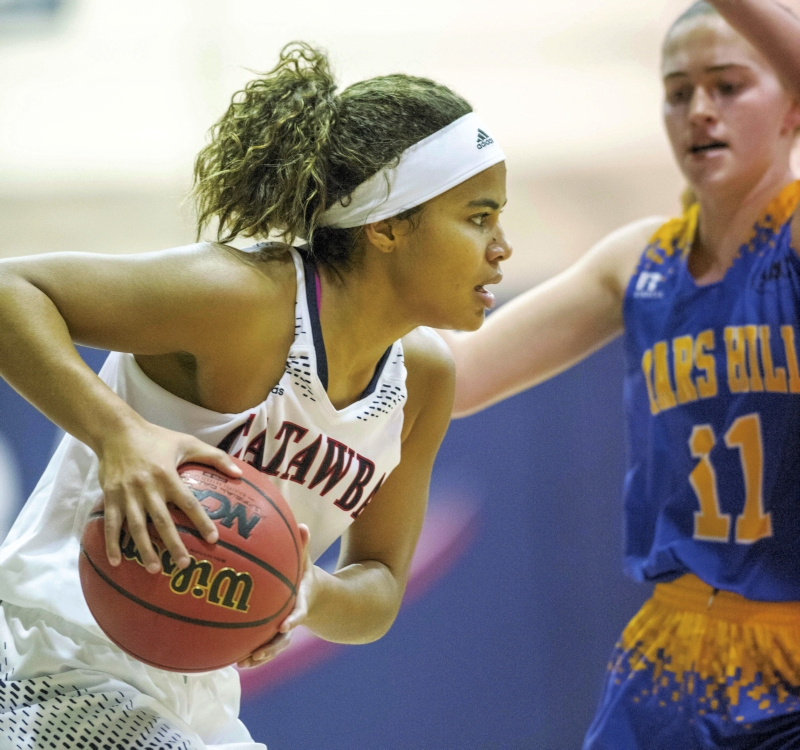 “Monday through Friday, somebody was always taking an exam,” coach Angie Morton said after Catawba (6-2, 3-0 SAC) won for the fourth time in its last five games. “It’s hard because they have to focus on their studies and stay up late and all that. That makes it a tough week, but I thought we had really good production today with all that other stuff going on.”

Catawba shot only 37.5 percent from the field but wasted little time making Mars Hill (2-7, 0-3) one with the canvas. The Indians converted nine of 15 field goal attempts in the opening quarter and used a 12-0 run to help mount a 16-3 lead in the first seven minutes.

“Right from the jump, we tried to live on the defensive end rather that the offensive end,” junior guard Serena Brown said after scoring a career-best 22 points. “We figured as long as we put a hand up and got in their way, we’d be okay.”

They were better than that. Catawba’s defense forced 20 turnovers, made 14 steals and limited the Lions to 29.8-percent shooting from the floor.

“There was nothing I liked about this game,” said first-year Lions’ coach Jenny Finora. “We struggled in every aspect — running the floor, shooting the ball, defending. And we had just played a really strong game against Wingate (an 80-73 loss on Dec. 3) where we had a chance to tie in the fourth quarter. We played with a lot of heart and a lot of fight. Today we had none of that.”

Catawba did. The 22-point winning margin was its largest this season. Senior guard Bri Johnson scored 15 of her 17 points in the first half and surpassed 1,000 career points when she buried a foul-line jumper early in the second quarter.

“I was aware — kinda, sorta,” smiled Johnson, who entered the game with 991. “But honestly, I was just trying to help the team get a win. That was most important. The 1,000 points was just a nice addition.”

So was the early spark she produced. Mars Hill never led, but stood within 4-3 before Brown drove for a layup and teammate Marshauna Butler connected on a 12-footer from the left side midway through the first period. Then Johnson lined up a 3-ball from the right corner and beamed home her first basket of the game.

“I was wide open and it felt good, so I let it fly,” she recalled.

Seconds later Johnson flashed one of her signature looks, swiping a pass along the left side and streaking in for a runaway layup that provided a 10-point lead. “We work on getting steals in practice,” she said. “On that one I went through the passing lane and no one stopped me.”

It surprised no one, other than her coach — kinda, sorta.

“At the start of the game (Johnson) was very unselfish, passing the ball more than she normally does,” Morton said. “I thought she’s wasn’t going to get a thousand points if she doesn’t shoot. She probably wasn’t thinking about it. She just knows she has to score.”

Catawba’s biggest lead was 50-24 following Brown’s three-point play in the third quarter. Mars Hill got as close as 17 down in the final period, but a last-minute 3-pointer by freshman Toni Tucker helped Morton breath a sigh of relief.

“We thought this would be a closer game,” she said. “After all the anxiety this week, it’s nice that it wasn’t.”

NOTES: Former North Rowan star Aliyah Farmer started for Mars Hill but the freshman had a tough game, scoring just three points before fouling out. Farmer did grab seven rebounds. (See story on Farmer in an upcoming edition. … Catawba outrebounded Mars Hill, 52-36. Center Terri Rogers contributed 11 points and 12 rebounds for yet another double-double. … Defensive standout Morgan Franklin suffered a sprained MCL in practice Wednesday and sat the game out. Junior Alexis Newbold started in her place and contributed eight points and eight rebounds. … The Indians visit Carson-Newman on Wednesday and Anderson next Saturday.