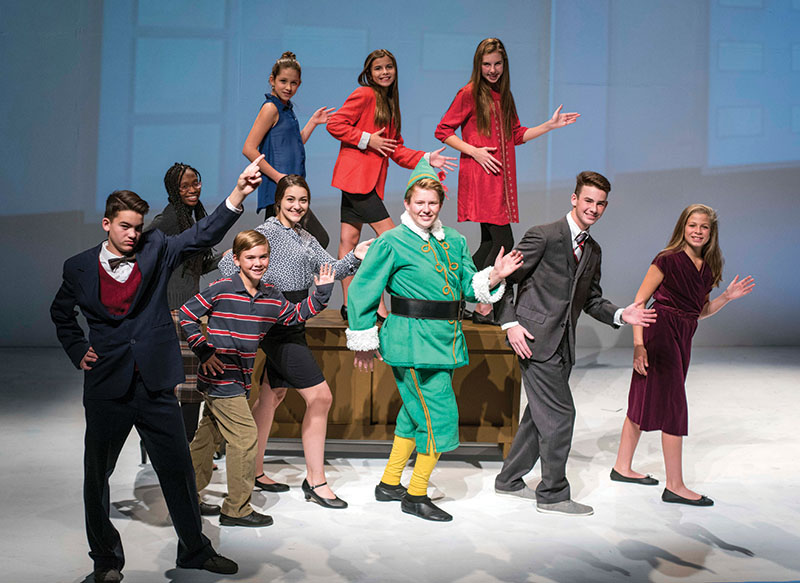 JON C. LAKEY / SALISBURY POST Jack Wilhelm as Buddy (center ) in a set up for the office scene. Piedmont Players Theatre presents Elf Jr. The Musical based on the Christmas Comedy Elf. The 35 member cast is set to stage the production at the Norvell Children's Theater Monday, November 28, 2016, in Salisbury, N.C.

This week, students around the county got a treat: an early viewing of the Norvell Theater’s production of ‘Elf Jr., The Musical.’ The show will open to the public tonight.

“I thought ‘Elf’ was great. All the actors were awesome. I loved the play so much. I could watch it a million times and it still wouldent (sic.) be boring.” —Ruby W.

“The play was spectacular! Buddy the elf was awesome at singing and it never got boring! I never thought that acting would be so much fun maybe I’ll be in one next time.” —Sheenya Daughtery

“What I loved about the play was the songs, and how all the actors and actresses tried their hardest to really express the characters they were playing.” —Grace Spieler

“‘Elf’ was very hilarious. Especially when Buddy said, ‘Yes, my ankles are very sweaty, how did you know?’ That was hilarious!” —Hines Busby

“I liked ‘Elf’ because I could relax and enjoy the show. I loved it the beginning when it said, ‘This place was different. Number one it had no Starbucks and every one there was an elf.’ The one word that describes ‘Elf’ is probably hilarious.” —Emma Clifton

Cleveland Elementary School fourth grade
“I thought the musical ‘Elf’ was a awesome play. My favorite part was when he said that the man dressed up as Santa was not Santa and said he smelled like cheese and beef. My favorite character was Elf because he was the jolliest one.” —Brandon Rogers

We thought the play, ‘Elf Jr. the Musical’ was fabulous because of the dancing. We liked how Buddy tried to get Jovie to listen that she could sing and how he used his words. It was awesome how Santa wanted to people to believe and him again so his sled could fly. We loved how Buddy and Jovie sang so the people would believe in Santa.” —Brandon Tavira and Brendan Sidden

“We thought the play, ‘Elf Jr. the Musical’ was entertaining. Our first reason is that the costumes were very detailed and that they looked amazing. Our second reason is that the play was very entertaining because of all the lively singing and dancing. Our favorite part was when Buddy was telling a story for the Christmas book. In conclusion, ‘Elf Jr. the Musical’ was entertaining because of our reasons.” —Berkley Koontz and Laci Smith

“We thought the play, ‘Elf Jr. the Musical’ was awesome because everything looked so real. We liked when it started snowing and everyone gathered around and sang. We also like how the elevator closed by itself. We also liked the background. We liked when Buddy ran into his dads office and he shredded the only copy of the new book. The play was so funny!” —Zander Brown and Sawyer Henderson

“I liked the play because I really never see plays like those. Musicals are really cool because it is real life and not on television. Mostly everything is on the TV and I don’t like that most everything on TV.” —Hayden

“I thought that ‘Elf Jr.’ was a great play because it went along the lines of my favorite movie ‘Elf’ and it is completely kid friendly. So for those of you that like ‘Elf’ the movie you will like ‘Elf Jr. the Musical.’ So if you are interested in this musical it is going to be at the Norvell Theater played by the Piedmont Players Theater.” —Cohen

“I liked this musical because it was sweet and I love Christmas plays. My favorite part was when all the people in the Central Park they started singing and it snowed for the first time in years. This musical is playing in the Norvell Theater. The people that are performing it are all Piedmont Players.” —Isabelle

“I think the ‘Elf Jr.’ musical was outstanding because they really showed kids the magic and miracles of the holidays. I enjoyed it and think you will enjoy it. Kids and adults love the musical. Buddy has an adventure at the Norvell Theater and it’s a great one. The magic and music of the ‘Elf Jr.’ musical are superb. The actors are great. The voices are great. The adventures are great. So come on down to Salisbury to see ‘Elf Jr. the Musical.’ I recommend this musical and I bet everyone who has seen it does too.” —Jack

“I liked the play because I liked how they sang and how they talked about the spirit of Christmas. People should believe in the Christmas spirit!” —Evelin Bermudez

“I loved ‘Elf Jr. the Musical.’ My favorite part was where the girl asked Santa for Grand Theft Auto for Christmas. I thought that was very funny!” —Braylon Pelshaw

“I enjoyed ‘Elf Jr. the Musical.’ It was fun to watch the lively cast but my favorite character was Jovie (Jillian Rippey). She has a pretty smile and a beautiful voice.” —Laney Beaver

“I thought ‘Elf the Musical’ had amazing actors! They nailed their parts. I hope my family gets to go see it.” —Baylee Thomas

“There was a great amount of Christmas spirit and comedy at ‘Elf the Musical.’ It even had a little bit of romance. I recommend you go see it!” —Carson Owensby

“I thought that ‘Elf the Musical’ was amazing! The actors were marvelous singers and dancers. The actor I loved the best was Buddy (Jack Wilhelm). He was awesome!” —Michaela Gilbert