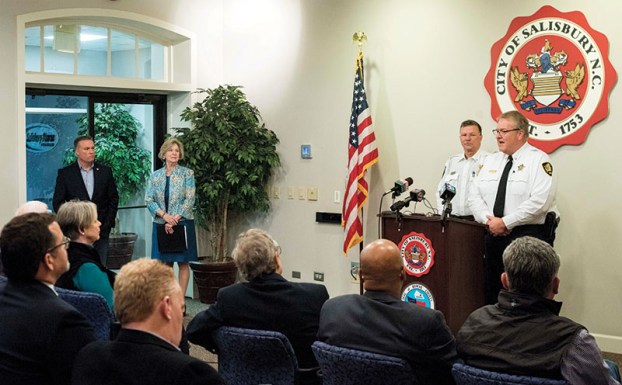 ‘If you know something, say something’

SALISBURY — It’s time to do the right thing, said city and county leaders on Wednesday.

As the community grapples with the Sunday murder of a child in her sleep, the city of Salisbury and Rowan County have announced a $20,000 reward for information leading to the arrest and conviction of people responsible for the death of A’yanna Allen, a 7-year-old second-grader at Koontz Elementary School.

Allen was shot and killed while she was sleeping inside her grandmother’s home on Harrel Street. Her paternal grandmother, Shirley Robinson, was injured.

“Escalating violence grips our entire county, from the southern-most corner to the northern end,” said Salisbury Mayor Karen Alexander during a Wednesday news conference. “I and our council, along with our entire community, are in mourning for this child. Enough is enough. We need justice for A’yanna Allen.”

Alexander announced the $20,000 reward and described the instructions simply: “If you know something, say something.”

There are two ways to report information through Salisbury-Rowan Crimestoppers. The phone number is 866-639-5245. Another way is online at tips.salisburyrowancrimestoppers.org.

Salisbury-Rowan Crimestoppers Chairman Mike Jones said the $20,000 reward is the largest one his agency has been involved in.

County Commissioners Chairman Greg Edds said the reward will be one of multiple announcements involving Salisbury and Rowan County to combat local crime.

“We are a county made up of 10 municipalities and when the town of Salisbury is suffering, then the other nine suffer with them,” Edds said. “The county of Rowan stands with the council of Salisbury and with the citizens of Salisbury in solidarity. We are here to say that enough is enough and this will end.”

Alexander said she and Edds first spoke on Sunday night about ways the city and county could address recent incidents of violence. Collaboration is the key to curing Salisbury’s crime problems, Alexander said.

Salisbury Police Chief Jerry Stokes reiterated the simple message. “If you saw something, say something,” he said.

He and others hope a $20,000 reward will be incentive enough for someone with information about the shootings to speak up. The reward will be facilitated through the Salisbury-Rowan Crime Stoppers.

Chief Stokes said the department wants to focus on the murder of the young girl and in finding her killer.
“We want to make sure we hold that person responsible for her death,” he said.

Stokes did not confirm whether the two shootings were connected, but did say the department has a “strong indication” that these murders were related.
His department hopes the reward will help bring a resolution to the deaths of both Allen and Mathis.

Stokes said the joint reward showed how seriously the community viewed not only the child’s death but all violent crime, and it reflected elected city and county leaders’ willingness to step forward and take action.

He said these are both very active investigations. Not only is the Rowan County Sheriff’s Office assisting in the investigation, he said, but so are federal and state agencies. He would not say whether the two shootings are gang-related.

Stokes said he does believe the community is frightened.

“People are scared and we understand that. We want to work with the community to resolve the crime problem and the fear of crime problem,” he said.

Sheriff Kevin Auten said his agency is working with the police to solve these crimes.

Auten said more agencies are working on the recent homicides, especially the A’yanna Allen case, than he could recall in a long time.

“To the folks involved in this case, do what’s right. Turn yourself in, be a real man, be a real person,” Auten said.

He encouraged those involved to contact the SBI or FBI if they didn’t trust local law enforcement.

“If that was your child laying in that bed sleeping, and I knew who shot and killed her, would you want me to do what was right? And I think everyone would say that’s doing the right thing. Let’s don’t be cowards out there. Let’s be brave and do the right thing by A’yanna,” Auten said.

He said the young girl didn’t deserve to die by gunfire.

“She didn’t do anything but go to bed. We need to do what’s right for that young lady,” Auten said. “And we need your help.”

By Amanda Raymond amanda.raymond@salisburypost.com SALISBURY – After recent incidents of violence in the city, more than 30 citizens urged the... read more