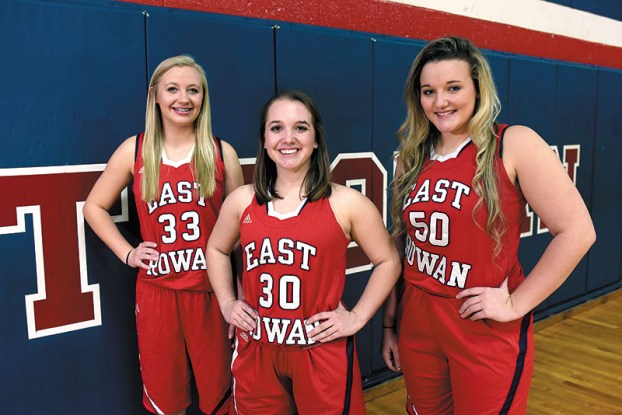 Mustang Girls at a Glance

GRANITE QUARRY – From one season to the next, most basketball teams will usually rebuild or reload.  The East Rowan girls face quite a different dilemma, a bare cupboard of Old Mother Hubbard proportions.

The Mustangs graduated their six top seniors last season, then right before the season began, learned that top returning inside player, Lauren Weisensel, had decided forego hoops to concentrate on soccer this winter.

Also departed is veteran coach Danielle Porter, who won 90 games and a couple of league titles in six seasons.  So the shelves have been wiped clean.

New head coach Kevin Holland knows he has a really clean slate to begin the season but looks forward to building the East girls back to the high levels they have reached in the past. “All of the girls we have now are very inexperienced from a varsity standpoint,“ he says, “but we have good girls who work hard and try to get better every day.”

A native of Duplin County and an N.C. State graduate, Holland is embarking on his first head coaching journey but he was an assistant varsity coach for Raleigh Millbrook’s back-to-back girls’ state 4A champions four years ago.

“I do know what great teams are and all the pieces that go with it.” He said. “We don’t have those pieces here at East yet. It does not happen overnight.”

Although moving here this summer from Raleigh, he is very familiar with Rowan County and Mustang athletics. His wife, Susan, is an East graduate and his father-in-law, Glenn Wall, is a longtime coach and teacher at Erwin Middle and East High. He knows the history and legacy of the Lady Mustangs’ program.
Holland says the youthful nature of his basketball program this season is obvious. There are 18 total girls in the program at present (varsity and jayvee) and 12 of those are freshmen and sophomores. The Mustangs return two players with varsity experience, junior guard Hollie Harrison (5-1) and senior post player Courtney Wagner (5-10). Harrison has taken on the role of team leader in the early season, helping the young team adjust to the new coach and the varsity expectations.

“I try to help everybody stay focused, get in position and run plays correctly,” Harrison said. “We have a lot to work on but we will definitely run the floor, get out and push the ball this season.”

Holland wants his team to work at a fast pace. “I want us to press, I want us to run,” he says. “We don’t have a lot of size, so we might as well get out and push the ball up and down the floor as much as we can.”

It appears that the task of pushing the team up and down the floor will fall to 5-foot freshman Adalie Harrison, Hollie’s younger sister. “Adalie will surprise some people this year,” Holland says. “She is quick and good ball handler.” So far in early games, she has performed well, hitting double figures twice and leading a season-opening win over North Stanly.

Holland also notes some good athleticism on the team this year that just needs to convert to basketball skill. He specifically cited senior Jordan McCall (5-8), a volleyball standout who joined the team this season, plus sophomore forward Lauren Coughenour (5-8) and sophomore guard Zynoria Winford (5-4).  Junior center Anna Shafer (6-1) gives the Mustangs inside size and is a good shooter.

“All of these players have the athleticism to be very good,” Holland says. “They just need to work hard, work on technique, get our system down. Mental toughness will definitely be part of it.”

Hollie Harrison:  5-1, Jr. G – The most experienced returning player for the team, she is the vocal leader of the team and a strong perimeter shooter and defender.

Courtney Wagner: 5-10, Sr. F-C – One of two seniors who saw inside action last season on the varsity. A strong rebounder, Wagner was part of the Mustang success in last several seasons but looks forward to the rebuilding process under a new coach.

Adalie Harrison: 5-0 Fr. PG – Although young and small in stature, Harrison is being counted on to run the fast paced offense this season. Her ball handling skills and quickness will be counted on offensively and defensively.

Anna Shafer: 6-1 Jr. P –  Coach Holland says Shafer has good skills and inside shooting ability but still needs to improve her footwork and movement to be a stronger post player. Still she gives the Mustangs some size and rebounding inside.