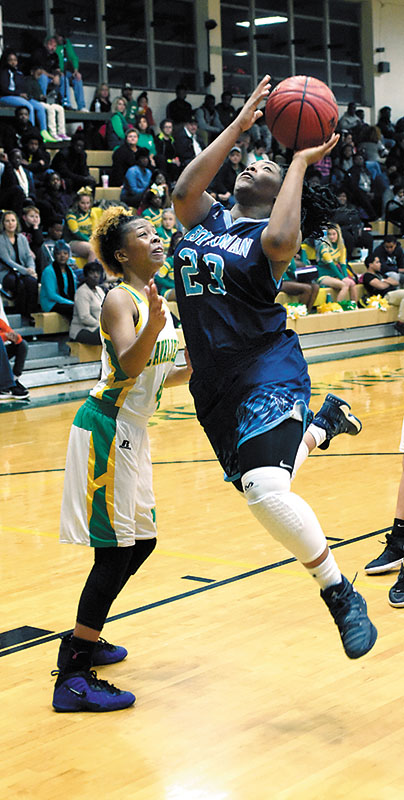 West's Egypt Alexander (23) on a layup with North's Tanajah Robinson (4). photo by Wayne Hinshaw, for the Salisbury Post

SPENCER — West Rowan’s youngsters gained some experience, while North Rowan’s kids gained some confidence on Wednesday in the the North gym.
West handled the Cavaliers, 59-44, although it wasn’t the walk in the park that was anticipated. When Brianna White battled for a three-point play and Bea Connor whirled to the hoop for a reverse layup, the underdog Cavaliers trailed by only nine points with three minutes left in the game.
West coach Ashley Poole played everyone she had in uniform a lot of minutes, so it’s not like there was ever much doubt who was going to win. Still the Cavaliers made some progress. Connor was still clapping for her team as she headed to the handshake line.
“We’re getting there,” North coach Ron Bost said. “We’ve come a long way since the season started.”
This was, by far, the most points scored by the Cavaliers and, by far, their closest loss.
West led after a quarter, 16-12, but got three buckets by freshman Abigail Wilson in the second quarter to expand the lead to 34-20 at halftime.
When Shyann Vaughters opened the second half with a West 3-pointer everyone though it was time for the rout to begin. Instead the Cavaliers played even with West in the quarter and they were still hanging in there at the end. And that was despite misfiring on a few dozen stick-back opportunities.
“We got a whole lot of rebounds,” Bost said. “But we missed the layups.”
West also missed a lot of layups.
“Just a bad shooting night for us all around,” Poole said.
The Falcons shot 25 percent on 3-pointers, 30 percent on field goals and 55 percent from the foul line.
Poole will take the win, although she knows West will have to be a lot sharper Friday when it takes on a hot Central Cabarrus team in South Piedmont Conference play.
“The biggest positive was we got to play everyone and our freshmen got some experience that they needed,” Poole said.
Freshmen Taylor Poole and Cindy Connolly scored their first varsity points.
Mary Sobataka and Wilson scored 11 each for the Falcons (2-1). Egypt Alexander had 10, with eight coming from the foul line.
White led the Cavaliers with 12 points.