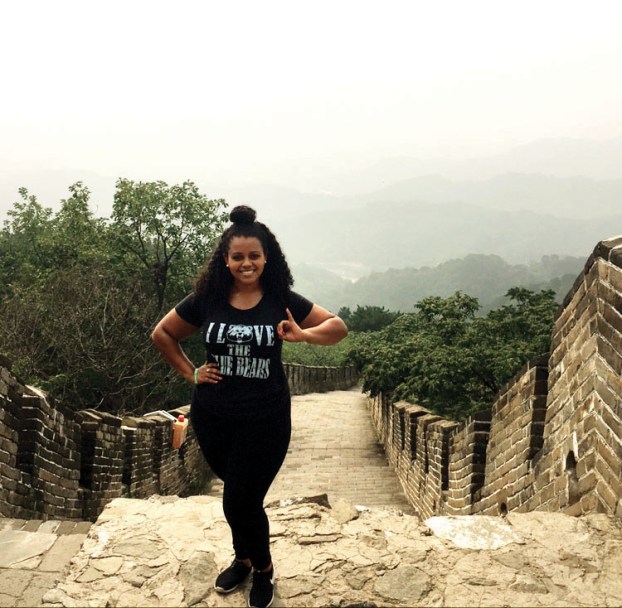 Livingstone student Sydney Robertson at The Great Wall of China.

SALISBURY – Livingstone College President Dr. Jimmy R. Jenkins, Sr. knows there are about 200 countries on the planet, and he wants his students to have the opportunity to travel to as many of them as possible.

That’s why Jenkins has created an International Program at Livingstone, which so far has sent students to China, India and Peru. And currently there are six students from Invertis University in Uttar Pradesh, India, studying on Livingstone’s campus as part of the institution’s International Program. The students have been on campus all semester and return to their homeland next week.

“I talk to our students before we send them overseas so they’ll fully understand the importance of the trip and, frankly, just how blessed they are to get the opportunity,” Jenkins continued. “Every student we’ve sent abroad has returned to campus with a much deeper appreciation for other cultures and a different outlook on life. I’m confident our international program will continue to thrive.”

Livingstone’s International Program didn’t really take off until Jenkins hired Earl M. Brown, Jr. to run it. Brown, a graduate of Morgan State University and Hunter College CUNY, is a former Peace Corps employee who has served as a middle school teacher in a remote part of the Republic of Tanzania, an East African country. He’s also been to 27 of Africa’s 56 countries and worked in various capacities on four continents.

“Mr. Brown was always ready to do whatever it took to get us abroad for the summer,” said Jourdan Norman, a sophomore business administration major from Christiansburg, Va. “He continuously reminded us how beneficial this experience would be, and he couldn’t have been more correct.”

Norman said he wasn’t 100 percent sold on the idea of traveling abroad in China – until after his application was accepted and he spoke to Brown.

“He began to sell me on the beneficial networking possibilities that could result from me going to China,” Norman said. “He showed me pictures and shared some stories about previous study-abroad participants. After doing that, he continuously kept in contact with us to ensure we completed everything we needed so we’d be able to go to China.

“He even went as far as driving us to the Chinese Embassy in Washington, D.C. so we could pick up some important documents,” Norman continued. “While he certainly didn’t baby us during the process leading up to our trip to China, he acted as a good father would by being loving but firm. He just wanted to make sure we got to take the trip to China, and I’m sure Sydney and Shondra are as grateful to him for that as I am.”

The first two Livingstone students to travel abroad under the institution’s International Program were Jimmy McNeil and Askia Abdul-Rahman, who spent 10 days in Iquitos, Peru, in a science/medicine internship studying under local doctor Lane Rolling.

That successful foray in 2014 was followed by a historic trip to India in 2015 during which Livingstone students Fabian Burch, Sean Bush, Anthony Kyles, Dietrick Mitchell, Yasmeen Patterson and Charles Thomas III spent more than a month studying at Invertis University.

Livingstone’s most recent international trip occurred during the summer, when Norman, Sydney Robertson and Shondra Redfern spent several weeks in China. Robertson and Norman were enrolled at Shanghai Polytechnic University in Shanghai, where they took business-related courses. Redfern was enrolled at Dalian University of Technology in Dalian and also took business-related courses.

“I wanted to go on the study abroad trip to China because my mother always instilled in us to travel the world by any means necessary,” said Redfern, a psychology major from Charlotte who anticipates graduating in May 2017. “I had been to Spain already, and as a family we go out of the country every year, so I kind of had an idea of what to expect.”

Turns out, Redfern was in for a big surprise.

“The trip to China exceeded any expectations I had,” she said. “I was able to experience everything that I expected plus more. I crossed a lot of things off of my bucket list, including hiking up one of the mountains, learning to speak a little bit of Chinese and meeting a lot of different people, some of whom I’m still in contact with. I also gained more insight into other cultures. The thing that I enjoyed most about being in China is that it was thousands of miles away, and I learned a lot about myself and was able to grow not only as a student but also spiritually and mentally.”

Robertson, a business administration major from Mount Laurel, N.C., is scheduled to graduate next week but cannot say enough about the China trip.

“China was one of the best experiences in my life,” she said. “The culture, food and even the people were great. They treated me as if I was a celebrity. I honestly didn’t want to leave, and I would recommend studying abroad, particularly going to China, to anyone.”

And just what did Robertson like most? Traveling to Beijing and climbing The Great Wall of China.