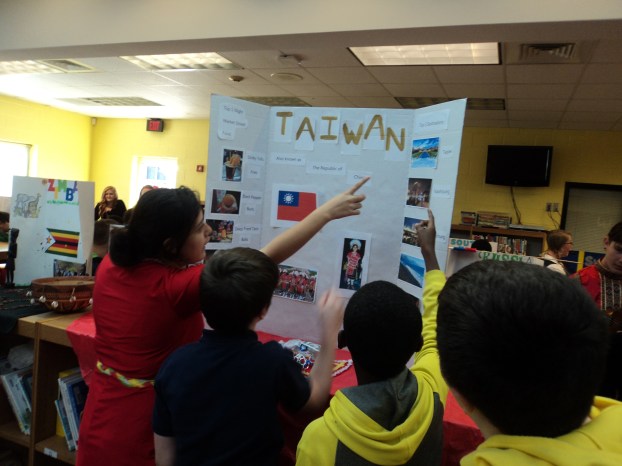 Hanford-Dole students get a visit from the World’s Fair

SALISBURY — Friday, Dec. 2 was unusually quiet in the Hanford-Dole Elementary library — until the World’s Fair arrived.

After presenting to the community the evening before, the freshmen brought their show on the road to the Hanford-Dole library. They were ready with puppet shows, music, dancing and crafts for the elementary students. “London Bridge is falling down” was particularly popular.

The first to arrive was the Pre-K class — little four-year-olds who were amazed by the transformation that had taken place. And all the students, kindergarten through fifth grade, liked the coloring sheets, stickers, instruments, costumes and games. Some of the high schoolers even learned they might want to be teachers.

This is Pierce’s fifth year at the early college, and as her World’s Fair project continues, she is discovering that some of her freshmen remember when the fair came to their elementary school. The teachers of Hanford-Dole said they felt sure that their students will never forget this event.

Pierce makes sure this is a collaborative event. Lisa Rider volunteered her time and costumes so every student had the opportunity to dress in authentic attire. Hanford-Dole staff provided transportation and set up spaces and rotations for the presentations. The early college staff provided support for both events, which included clean up, supervision and documentation.

Cierra Lannon: Checking the mail for that all-important letter

By Cierra Lannon Special to the Salisbury Post High school seniors everywhere are checking their e-mail and home mailboxes with... read more