Family of A’yanna Allen speaks out on her murder, funeral 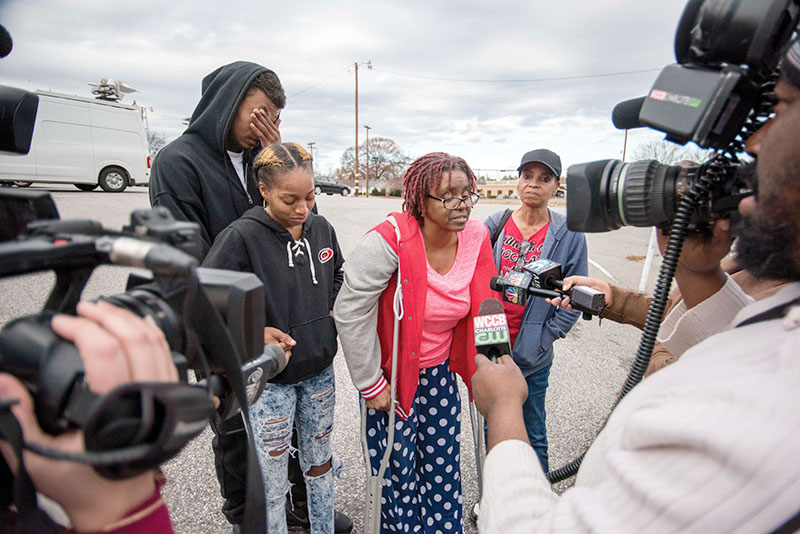 JON C. LAKEY / SALISBURY POST The family of 7-year-old A'yanna Allen speaks to the media on Wednesday afternoon. A'yanna died from gunshots she received while she was sleeping in her paternal grandmother's home in Salisbury over the weekend. From Left, Sam Starks wipes his eyes while supporting his girlfriend Shequita Woodberry, who is the mother of A'yanna. Shirley Robinson (center) A'yanna's paternal grandmother talks about her granddaughter. Her home was the one that received the gunshots from the outside. April Woodberry, (right) A'yanna's maternal grandmother stands by. The family opened the community to come to the child's funeral that will be held later in the week. Wednesday, December 7, 2016, in Salisbury, N.C.

SALISBURY — “You have hurt us dearly,” Shirley Robinson said.

The five words summed up the feelings of an entire community Wednesday, especially for the family of A’yanna Allen, a young girl shot and killed while she slept in her bedroom early Sunday morning.

Robinson, asleep beside granddaughter A’yanna, was shot in the leg.

Salisbury Police and the State Bureau of Investigation are working to determine who killed this vibrant, loving Koontz Elementary School student.

Family members who gathered Wednesday after a press conference say they are grateful to Rowan County and the city of Salisbury for offering up a joint $20,000 reward in the crime.

“We loved her so much. Please come forward,” Robinson begged. “Y’all took our baby from us.”

“I appreciate everything,” she said.

She said it’s sad that those with knowledge of the crime have to be prompted with money to speak up.

Other family members have told local media they believed the shooting that killed A’yanna was retaliation for a shooting at Firewater restaurant and lounge just hours before.

Investigators have said an argument led to the shooting of 22-year-old Sharod Mathis in the parking lot of Firewater Bar & Lounge just after 1 a.m. Mathis was taken by private vehicle to the hospital, where he later died.

Just three hours later, someone fired into the bedroom where A’yanna and her grandmother slept.

“She was a well-loved child,” said Robinson, balancing on crutches.

She described how A’yanna often “took over” the television to watch Nick Jr. cartoons.

“She was an innocent child,” Robinson said.

At one point, Woodberry was overcome with emotion and turned to the arms of boyfriend Sam Starks. Her mother, April Woodberry, was also on hand.

The family members say they want others to celebrate the life of A’yanna, and they have decided to make her funeral open to the public and media.

The young girl’s funeral will be held Sunday at Gethesemane Missionary Baptist Church, 719 S. Caldwell St. The visitation will take place at 2 p.m. and the funeral will begin at 3 p.m.