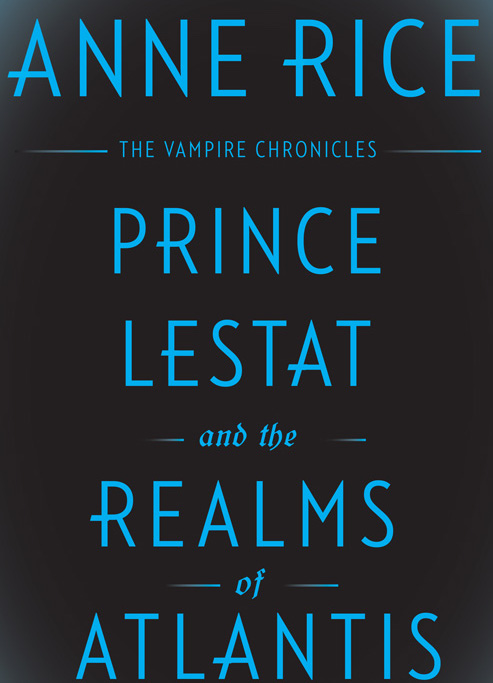 Yes, the Vampire Lestat is immortal — but it still boggles Anne Rice’s mind that she can continue to write about him after all this time.The best-selling author’s first novel, “Interview With the Vampire,” which introduced Lestat, hit bookstore shelves in 1976. Forty years later, the “Vampire Chronicles” series is still going strong. The 12th installment, her latest, is “Prince Lestat and the Realms of Atlantis.”

“Frankly, I could never have foreseen 40 years ago that I’d still be writing about Lestat, of all characters, or that there would be a series of the ‘Vampire Chronicles’ spanning so many stories,” she says. “I often contemplate the whole experience with awe and gratitude. I love it.

“I love that the original novel stayed on the shelves long after its publication and that with the second novel, ‘The Vampire Lestat,’ a series truly was born.”

In “Realms of Atlantis,” Lestat is the new Prince of the Vampires at the Chateau de Lioncourt in the mountains of France. He intends to rule the Undead in peace, but beings from the lost kingdom of Atlantis pose a new threat to the vampires’ existence.

In our Q&A with Rice (call it an Interview with the Vampire Author), we discuss Lestat, the new book and four decades of “Vampire Chronicles.”

Q: What was the genesis of Lestat, your initial spark of inspiration?

A: Lestat sprang to life in the corner of my eye, an antagonist of tremendous seductive power, who truly did take on a life of his own as I was focusing on Louis and his tragic tale in “Interview With the Vampire.”

By the time the book ended, I had it in my mind that Lestat would have an entirely different interpretation of events and maybe someday I could explore that. But eight years passed before I did.

Lestat was very much based on my husband, Stan, on Stan’s physicality — Stan being a lithe, athletic man of great strength and self-confidence and also an atheist who shook his fist at the stars.

But Lestat really became Lestat. And you could say, by the time the second book was finished, Lestat was me.

Q: What do you think of the phenomenal popularity of vampire fiction of recent years?

A: It’s been marvelous to see vampires go mainstream. Vampire novels are now a secure genre, like Western novels or spy novels or detective novels. And we’ll likely see a great deal of new material in the years to come.

Why did this happen? I suspect it was author-driven from the start. If there hadn’t been a Charlaine Harris, we would never have gotten Sookie Stackhouse and the marvelous world of Bon Temps, La. If there had not been a Stephenie Meyer, we would not have had Bella and Edward in Forks, Wash.

We can ask why these books were hits, but what is obvious is that they were hits, that people loved them and they embraced them.

Q: What compelled you to introduce Atlantis and a creature like Derek into your world of vampires? How long have you been interested in the legend of Atlantis?

A: The legend of Atlantis has always haunted me and I have always burned to do my own version of it, always wanted to explore the legend to the depths. I’d been working for a long time on a novel called Born for Atlantis with Derek and his companions and I had come to an impasse.

Then I had a brainstorm: Lestat, of course!

When I brought the two ideas together, the new novel caught fire. I used virtually everything I had written for Born for Atlantis, rewriting it in a wholly new way. Derek is now one of my favorite characters and I’m eager to get back to him.

Q: Do you think it’s important to read the “Vampire Chronicles” in order, beginning with “Interview With the Vampire”? Or is it OK to open with any book from the series?

A: I think it is more enjoyable to read the “Vampire Chronicles” in order, but I have struggled to make each book intelligible and enjoyable on its own. I think this new book is entirely devourable for new readers who have not read any of the earlier books.

I often start reading a series by other authors by tackling the latest book. I’ve done this with Preston and Child’s novels and with the “Jack Reacher” series of Lee Child. Same with the delicious spy novels of Daniel Silva. If I like the latest, and I did with all those series, I then work backward.

But will people enjoy my later books more if they know the whole saga, the history, the whole cast as it evolved? Probably so.

Q: What drives you today as an author?

I don’t have enough time or energy to write all the books I dream of. I wish I did. I wish I could clone myself to work on three or four series at a time. I have angels to which I must return. And werewolves. Some readers want me to return to the Mayfair Witches. I have more adventures for Lestat.

I love writing. I am that person who grew up to be just what she dreamed of being. I’ve been told that firefighters are like that. They are all men and women who dreamed of being firefighters when they were kids. Well, for me, it was always the burning desire to be a ‘real writer.’ I feel blessed.

Visit the Fort Worth Star-Telegram at www.star-telegram.com

Captain Comics: A gift guide to please every super-hero fan on your list

By Andrew A. Smith, Tribune News Service (TNS) So Black Friday and Cyber Monday are over, and you still have... read more