Sale traded to Red Sox, who’s the next big name to move? 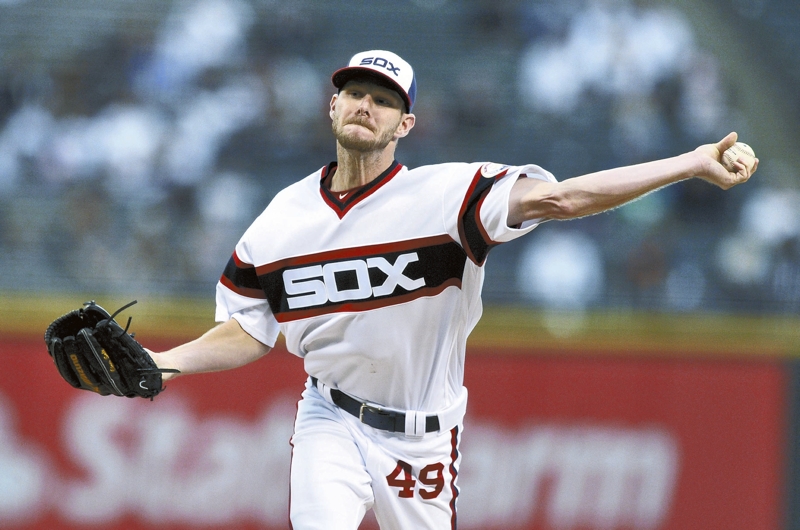 AP Photo/Paul Beaty, File ... Starter Chris Sale delivers a pitch during a game last season for the Chicago White Sox. A person familiar with the trade tells The Associated Press that the Boston Red Sox have gotten star pitcher Chris Sale from the White Sox. The person spoke on condition of anonymity on Tuesday.

OXON HILL, Md. (AP) — The Cubs could use a closer, maybe someone like Wade Davis. Texas needs a center fielder, and most every team wants an extra arm.

So now that Chris Sale got traded, baseball executives are trying to figure out who’s next.

Andrew McCutchen is still available, perhaps the Tigers really would deal Miguel Cabrera or Justin Verlander, and Cincinnati speedster Billy Hamilton might be on the move.

Boston made a big splash at the winter meetings Tuesday, getting Sale. The AL East champion Red Sox sent a package of four prospects including high-priced and highly talented hitter Yoan Moncada to the Chicago White Sox for the All-Star ace.

Tampa Bay closed in on a two-year contract with All-Star catcher Wilson Ramos worth about $12.5 million. The 29-year-old hit .309 with a career-high 22 home runs and 80 RBIs before tearing a knee ligament late in the season.

More action could be in the works, too.

Kyle Schwarber, of course, isn’t going anywhere. The Cubs slugger completed a remarkable comeback from a knee injury in April by bashing his way to a World Series championship.

Creative manager Joe Maddon sees something interesting in the future for Schwarber — as in, maybe the leadoff spot after Dexter Fowler became a free agent.

“Two years ago, I considered leading Kyle off and putting Dexter second. But I had all the dudes do all the work, all our nerds did all the work and they really liked Fowler one and like Schwarber two just based on the data,” he said. “So I went with that and it worked out well.”

Fowler, meanwhile, would make a nice fit in St. Louis.

“I know about Dexter,” manager Mike Matheny said. “Yeah, there’s no question that he’s one of the guys out there that not just the Cardinals but other teams are interested in.”

“I’m always available for whatever the recruiting process needs,” he said.

No movement yet on star closers Aroldis Chapman and Kenley Jansen, though the New York Yankees are looking at both of them.

“That’s a big one. That’s a blockbuster. That was a wow,” Yankees general manager Brian Cashman said. “Obviously they gave up a lot and they got a lot.”

“Boston’s like the Golden State Warriors now in baseball. They got their (Kevin) Durant and their (Draymond) Green and (Klay) Thompson and (Stephen) Curry,” he said.

Mets GM Sandy Alderson said he thought the Sale trade might cause the rest of the trade market “to start to loosen up a bit.”

Either way, the Mets figure to have a new face in spring training next year — Tim Tebow.

Manager Terry Collins said he’d like to put the former NFL quarterback into a few exhibition games, even though Tebow still has a long path in his transition to playing baseball.

The 29-year-old aspiring outfielder hit .194 in the Arizona Fall League, striking out 20 times in 70 plate appearances.

“Our players, they’re athletes, too. They’re fans, too,” Collins said. “They would probably like to know how to run a quarterback sneak one day.”