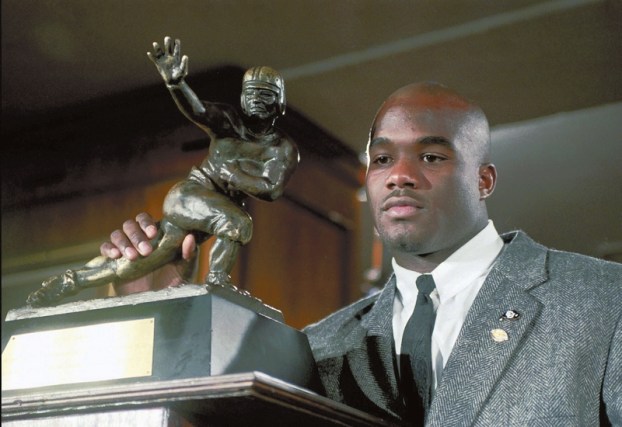 FILE - In this Dec. 10, 1994, file photo, Colorado's Rashaan Salaam poses with his 1994 Heisman Trophy at the Downtown Athletic Club in New York. Authorities say Rashaan Salaam has been found dead in a park in Boulder, Colo. The Boulder County coroner’s office said Tuesday, Dec. 6, 2016, that it is still investigating the death of 42-year-old Salaam. (AP Photo/Adam Nadel, File)

Heisman Trophy winner Rashaan Salaam was found dead Monday night in a Boulder park less than two miles from Folsom Field, where he carved his name into the University of Colorado record books as one of the greatest players in the program’s history.

The Boulder County coroner’s office was still investigating the cause of the death of the 42-year-old Salaam, who won the Heisman in 1994. The body of the one-time running back was found at Eben G. Fine Park in Boulder. Police say foul play was not suspected.

Salaam’s mother, Khalada, told USA TODAY Sports on Tuesday that police said they suspect he killed himself. “They said they found a note and would share that with us when we get there,” Salaam’s mother said.

Dave Plati, associate athletic director at Colorado and a close friend of Salaam’s, said the former Buffaloes star never let on that he was hurting : “When you were around him he was just the same old Rashaan. You know, effervescent, jolly, go-lucky, smiling all the time, doing things for other people.”

There was just no way to tell Salaam “had these kind of demons inside him,” Plati added. “I was as close to him as anybody and loved the guy … and wish I could have noticed or done something for him or wished that he would have called me.”

Salaam’s death stunned the Colorado football community which this year celebrated a revival with a 10-3 record, an appearance in the Pac-12 championship game and the Buffaloes’ first bowl bid in almost a decade.

“You talk about a young man who was smart, handsome, talented. He was very, very gifted. He was humble. He was a team guy,” Bill McCartney, who coached Salaam from 1992-94, told The Associated Press.

“His personality was infectious. He just had a warmth about him, a genuineness about him that was really contagious,” McCartney said.

“On the surface, he had everything. We thought he was a cut above, and he turned out to be.”

Former teammate Matt Russell, now the Denver Broncos director of player personnel, said Salaam was a “fiercely loyal friend,” the “ultimate teammate” and the very “definition of a winner.”

“He practiced hard, he played hard and he made our teams better,” Russell said. “My heart goes out to Rashaan’s mother and his family. They have a lot to be proud of with the person that Rashaan was, the way he treated people and the friend he was to everyone he came across. He will be missed by so many.”

Salaam rushed for 2,055 yards and 24 touchdowns as a junior in 1994, leading the Buffaloes to an 11-1 record, a win over Notre Dame in the Fiesta Bowl and a No. 3 finish in the final polls. He won the Heisman in a runaway.

“I went to New York with him,” McCartney recalled. “I was thrilled for him. I’m pretty sure he’s the only Buff that ever got that award. When we recruited him we knew he was special … he just kept getting better.”

His work ethic was renowned. Former teammate Blake Anderson can’t forget how Salaam used to lift weights with the offensive linemen, because “that’s how strong he was, and how dedicated he was.”

“We were blessed with an incredible team and love for one another,” said Anderson, who was a receiver on the ‘94 team that also included fellow receiver Michael Westbrook and quarterback Kordell Stewart. “It was just an awesome, awesome experience to have the magnitude of the players that we had on that team, not only for their abilities to play football, but their abilities to love and be great friends, which we all are currently today.

“We are all hurting tremendously today.”

Salaam was one of the nation’s most prized recruits coming out of eight-man football at La Jolla Country Day, a private school in San Diego. His father played freshman football at CU in 1963 before transferring to San Diego State to be closer to home.

“When we recruited him and got him to commit, it was huge,” McCartney said. “We knew that he was going to distinguish himself. He was very highly recruited. I can remember how happy we were. He lived up to all our expectations. He was a tough kid, he was rugged, he had great acceleration, great athleticism.”

The Chicago Bears made him a first-round draft pick in 1995, and he rushed for 1,074 yards and 10 touchdowns in winning NFC Rookie of the Year honors.

Injuries cut short his career. He only scored three rushing TDs in the next two years in Chicago and played his last NFL game with the Cleveland Browns in 1999. Salaam played for the Memphis Maniax of the defunct XFL and attempted one last comeback with the NFL before retiring.

“He was the only Heisman Trophy winner in the state of Colorado,” Plati said. “That could have been a burden in later years because he kind of felt he didn’t have the great professional career that should have followed that. But that doesn’t matter, it’s what you did to win the Heisman and he’s an icon in college football. Only 70 players or so have won the Heisman Trophy and he’s one of them.”

Salaam fell on hard times after his playing career ended. In 2011 he auctioned his Heisman ring.

“I don’t understand that,” McCartney said. “You talk about a kid that on the surface had everything. He was a real handsome guy, he was intelligent, he was personable. You couldn’t really point at him and see any deficiencies.”

Jefferson has career night, leads No. 5 Duke past Florida