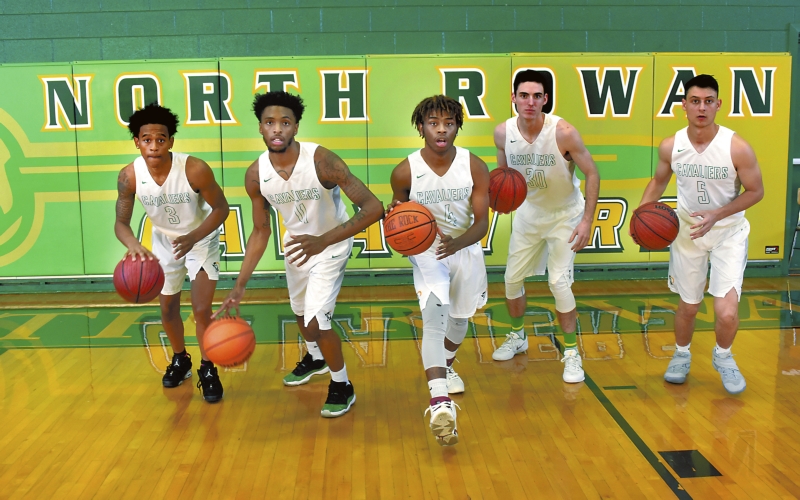 SPENCER —When we last heard from the North Rowan boys basketball team, it was making headlines for all the wrong reasons.

The Cavs were ranked No. 2 and had visions of a 2A state championship dancing in their heads when their 2015-16 season ended with a thud, not thunder. In silence, not screams.

“We’ve tried to put all that behind us,” said coach Andrew Mitchell, recalling North’s season-ending debacle at Salisbury. “It was a decision we didn’t agree with, but the state said we violated a rule, so we accepted it and moved on. It hurt us, but we’re not letting it hold us back.”

North was forced to sit out the CCC tournament and a possible run to a state title, which still boils the brain. But instead of getting bitter, this year’s team has gotten better.

“Eventually,” Mitchell pointed out. “Not right now, but eventually we may be better than last season.”

North won three of its first four games this year, but Mitchell seems focused on what the Cavs haven’t accomplished. “We’re not very big,” he offered. “We’ll have to rebound-by-committee. We’re a terrible free throw shooting team. Against Mooresville we went 20-for-48 from the line. And against Butler, the No. 2 team in the state, we lost by 12, turned the ball over 21 times and missed nine free throws. All that has to change.”

If a positive attitude carries any weight, it will. North has a group of forward-looking, heads-on-straight student-athletes.

“I heard LeBron say it on TV,” Mitchell explained. “Be a star in your role. If you’re really good at rebounding, be a great rebounder. If you’re offense, be good on offense. If you’re a leader, be a leader. The guys have bought into that. Everybody’s trying to do something to contribute to the team.”

It’s a team centered around returning starters Henderson Lentz and Joseph Scott. Lentz is a 6-3 senior who plays like a ’68 Chevelle — turbo-charged and sporty. “He has no fear,” Mitchell said. “He can out-sprint everybody, a three-point shooter who can show you the ball, put it on the floor and get all the way to the basket. The best is yet to come for him.”

Scott, a senior swingman, averaged 15.2 points per game last season and was named all-conference and all-county. He’ll reach 1,000 career points around Christmas and is motivated by personal circumstances. “He’s only 6-1, but he’s probably our best, back-to-the-basket post player,” Mitchell indicated. “And our best defender.”

Junior Malon Herron-Cuthbertson fortifies North’s backcourt. A six-foot junior transfer from Carson, he and Lentz are the team gym rats. “We have to put them out so we can go home,” Mitchell said. “Malon will be a college player for somebody.”

Sophomore center Dayjuwon Cooke is a lanky, 6-3 and 175 — but don’t let that fool you. “He’s relentless on the boards,” Mitchell said. “He can outjump everybody and doesn’t mind getting bruised. He’ll bruise you right back.”

It’s a homecoming of sorts for 6-3 sophomore Brevin Goodlett, who played for East Rowan last season. The forward cut his teeth in North’s middle school system. “A beast on the boards,” Mitchell said. “Once he develops his outside shot he’ll be unstoppable.”

Senior point guard Joe Harrison is a third-year letterman and will be the first off North’s bench. Football double-dippers Alonzo Sirleaf, Daylon Cuthbertson and Josh Ellis, all seniors, have joined the team this week.

“I love this team,” Mitchell concluded. “I love the leadership. After all they’ve been through they’re still here and still leading.”

Henderson Lentz, senior forward — The team’s spiritual leader, he’s a Lutheran junior minister and motivational speaker. Limited to 16 games last season, he rode shotgun, averaged 8.3 points-per-night and made the all-CCC squad. This year he takes the wheel. He is, as Red said to Pop in the baseball movie, a natural.