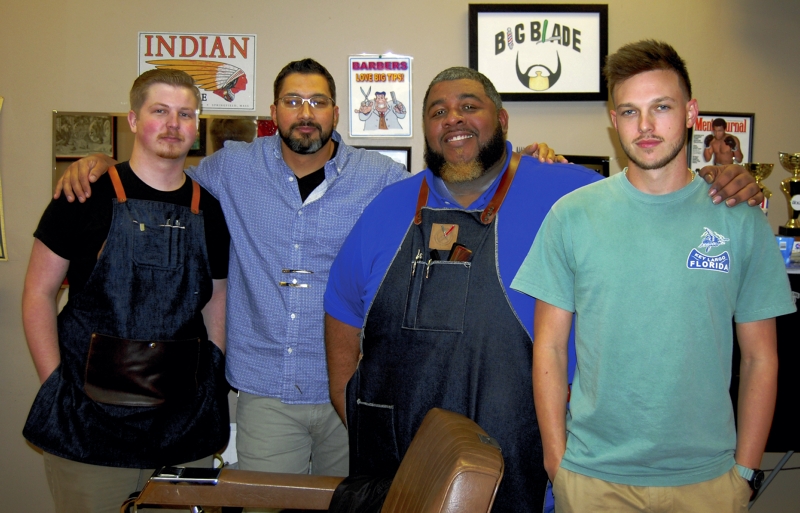 Made Man Barber & Shave, at 108 W. Innes St., will stay open for three extra hours on Wednesday and donated all of the proceeds during that time to the family of A'yanna Allen, a 7-year-old who was shot to death on Sunday. From left to right: Hunter Cagle, owner Brian Hunt, Tim Batten, Caleb Cranfield. Amanda Raymond/Salisbury Post

SALISBURY – A local business will be collecting donations to help the family of a 7-year-old who died on Sunday.

Made Man Barber & Shave, at 108 W. Innes St., will be open on Wednesday for three extra hours to collect funds for the family. Instead of closing at 6 p.m., the shop will be open until 9 p.m. on Wednesday.

Money from haircuts and other donations during the three hours will all go to the family of A’yanna Allen.

Allen, a second-grader who went to Koontz Elementary School, was shot and killed inside her home on Harrel Street on Sunday morning.

Phillip Bradshaw of Bradshaw’s Bonding Company and Obie Faggart of TNG Barbecue and others in the community have now offered a $2,100 reward for information that leads to the arrest and conviction of those involved.

Tim Batten, a master barber at Made Man Barber & Shave, said he has two daughters of his own, so the news of the death hit home.

“It takes you a long time to learn your kids,” he said. “Seven years isn’t enough time…”

Batten said he and the other employees, including apprentice barbers Hunter Cagle and Caleb Cranfield and owner Brian Hunt, all decided to hold the fundraiser together.

Batten said he does not know the family personally, but since the news of the event has spread, some of A’yanna’s family members have thanked him over Facebook.

In the past, Made Man Barber & Shave has given free haircuts and shoe shines to veterans.

Batten encouraged the community to visit the shop on Wednesday and “at least give $1” to the cause. He said even those who cannot give can come by to show support and fellowship with the community.