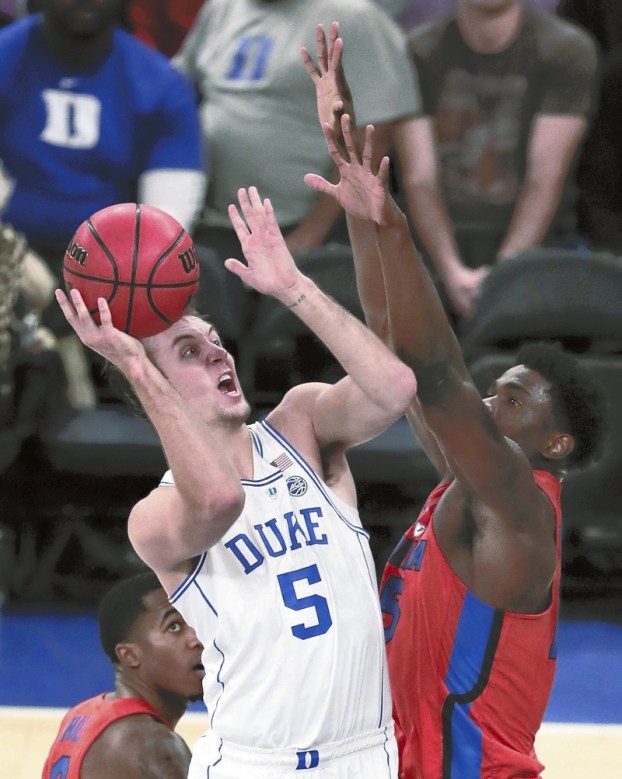 Jefferson has career night, leads No. 5 Duke past Florida

NEW YORK (AP) — Amile Jefferson had career highs of 24 points and 15 rebounds to lead No. 5 Duke to an 84-74 victory over No. 21 Florida on Tuesday night in the Jimmy V Classic at Madison Square Garden.

Luke Kennard scored 29 points and freshman Jayson Tatum added 22 for the Blue Devils (9-1), whose only loss was to Kansas on this same court in the Champions Classic in November.

Twice in the final 8 minutes the Gators (7-2) got within seven points but both times Kennard scored to hold off Florida, once with a 3-pointer and again with a long layup off a steal.

Grayson Allen, Duke’s preseason All-America, had an off night shooting (2 for 10 including 1 for 5 on 3s) but he had eight assists to go with his six points.

Florida: In the first eight games of the season, six different players led the Gators in scoring. … Florida coach Mike White was 3 years old when Mike Krzyzewski started coaching at Duke. … Because of renovations at the O’Connell Center on the Florida campus, the Gators won’t play their first home game until Dec. 21 against Arkansas-Little Rock. All their games are either on the road or at neutral sites until then.

Duke: Krzyzewski is 29-10 at Madison Square Garden as Duke coach. … The Blue Devils lead the all-time series with Florida 13-4. … Jefferson was coming off a career-high 20 points against Maine. He had 14 rebounds four times. … Duke had five double-figure scorers in seven of its nine games coming in. The Blue Devils had three against Florida, all over 20 points.

Kevin White, the athletic director at Duke, is the father of Florida coach Mike White.

Florida: The Gators head for a real rivalry game, Sunday at Florida State.

Duke: On Saturday the Blue Devils travel to Las Vegas to meet UNLV.