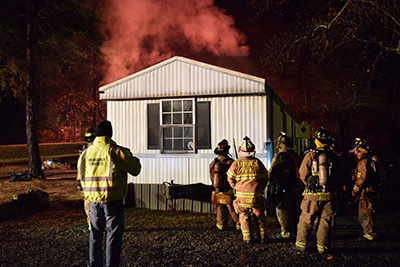 As temperatures fell Tuesday night one family found themselves out in the cold.

Firefighters received a call at approximately 10:34 p.m. about a house fire at 115 Rockwood Drive, off of Artz Road near Faith. Bostian Heights Fire Chief Mike Zimmerman said that when he arrived at the mobile home flames were shooting out the front window.

The home’s occupants, two adults and three children, escaped unharmed. Zimmerman said firefighters quickly got the blaze undercontroll. Accoding to Zimmerman, the fire appeared to have begun as a kitchen grease fire, though Rowan County Fire Marshal will be investigating.

The full extent of the damage is unknown at this time, but Zimmerman said it was extensive. The family is being aided by the Red Cross.