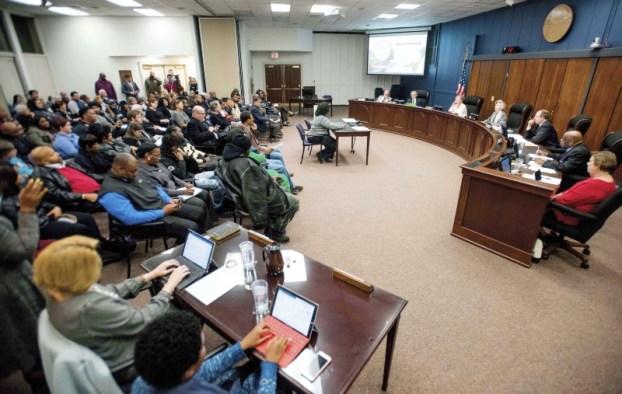 Salisbury City Hall was filled with concerned citizens in early December 2016 who wanted to talk about shootings in the city. JON C. LAKEY / SALISBURY POST Carolyn Logan was the second person to speak during the public comment period at the city council meeting. Salisbury City Hall was filled with concerned citizens speaking on the topic of recent shootings.
JON C. LAKEY / SALISBURY POST

SALISBURY – After recent incidents of violence in the city, more than 30 citizens urged the Salisbury City Council on Tuesday to find solutions.

The council’s meeting room was filled with people wanting to comment on two incidents that the community is still struggling to recover from. The first was the death of 22-year-old Ferguson Claude Laurent that happened on Nov. 3. Laurent was shot by a member of a Special Response Team during the execution of a no-knock warrant on Lafayette Street.

Second were the shootings that occurred this past weekend. On Sunday morning, the Salisbury Police Department responded to a shooting at Firewater Restaurant and Bar. They found out that Sharod R. Mathis had been shot and taken to Novant Health Rowan Regional Medical Center by a private vehicle. He later died of his injuries.

Later that morning, there was another shooting at Harrel Street where Shirley Robinson was wounded in her leg and her 7-year-old granddaughter A’Yanna Allen was found dead at the scene.

Carolyn Logan, a frequent speaker at council meetings, said she felt like her comments were falling on deaf ears.

“I told y’all that I feared that (there was) going to be somebody hurt that’s going to be an innocent person. I told y’all my fear for somebody with a disability getting hurt, an elderly person, a child,” she said. “Now a child is hurt.”

She and others questioned the way the city was spending its funds.

She was also frustrated with the council’s practice of not responding to the citizens during public comment.

Mary Francis Edens said she was mourning the death of A’Yanna Allen.

“This is not normal,” she said. “The time has come. We must change.”

She said one of the ways to improve trust between the community and the police department was to ban the use of no-knock warrants.

Lawther based his conclusion on a case from Fayetteville where the city tried to adopt an ordinance to ban the police department from stopping cars and asking the driver to voluntarily consent to a search. The attorney general’s opinion on the case was that search and seizure warrants are part of a state’s statutory scheme and cities do not have the authority to adopt ordinances that would affect that scheme.

Lawther said the city could look at other ways of dealing with no-knock warrants, but it could not pass an ordinance to ban their use.

This was stated after the public comment session, during which Al Heggins, representing Women for Community Justice, presented the council with a petition to ban no-knock warrants, place an emphasis on community policing and allocate funds to increase staffing in the police department, provide de-escalation training and recruit officers that represent the racial, cultural, ethnic and linguistic makeup of the community.

Heggins asked that everyone who was against no-knock warrants being used in the community stand and almost everyone in the crowd stood.

The petition can be found on www.change.org.

Alex Clark said he was a victim of the execution of a no-knock warrant. He said the city needs to come up with serious solutions or the violence may spread to other parts of the city.

“…When we allow our children to control our communities, what does that really say about us?” he said.

He said part of the problem is that the youth do not have enough activities to get involved in to keep them occupied, which was echoed by others who spoke.

Preston Wallace said police officers should be more involved with the activities that are going on in the city so the youth get to know them.

Ollie Mae Carroll suggested the city start a crime prevention council to consolidate some of the ideas of different community groups.

Linda Hunt said the city will have to do things differently to reach the current generation of young people. She suggested meeting with gang members and establishing rules and guidelines. She also suggested they work to get misdemeanors expunged to help people get better-paying jobs. Hunt said she thought the money used for parades and other events in the city could be used to fund grassroots efforts that are in the community.

“Come out of downtown. Come to the west side, come to the east side,” Hunt said. “Come out of this ivory castle and really see what’s going on because if you don’t (there’s another) side of that you don’t really want to see. You haven’t seen nothing yet.”

Councilman Kenny Hardin said he was frustrated by not being able to respond to the citizens’ comments.

The council’s usual practice is to listen to the public comment, take notes and have city staff or the appropriate person respond to their issue at a later time.

“I think that as an elected official, we owe more to the citizens. I don’t think we should get into a dialogue, but to just sit here and not say anything, to me, is just the ultimate disrespect,” Hardin said.

Councilman David Post said he did not believe the council’s rules stopped them from responding to public comment. Mayor Pro Tem Maggie Blackwell said the rule was put in place so that council members do not argue with citizens, but she did say she thought that the rule did give some latitude for the council to respond.

The council agreed to put the issue of responding to public comment on the agenda for a meeting in January.

Later in the meeting, Hardin said he did not want Allen’s death to be used for any kind of political gain. He said criticism and “finger-pointing” needed to stop and both the city and community members needed to go into the affected communities and work towards a solution.

City Manager Lane Bailey mentioned that the police department and city are working to recruit more police officers with incentives. Three officers were trained to teach verbal judo, a technique used to de-escalate situations, and officers will soon be attending de-escalation sessions.

He said part of the problem with recruitment is that there are not as many people who want to become police officers in today’s climate.

Mayor Karen Alexander said she has been meeting with mayors across the state and has contacted the U.S. Congress of Mayors for resources to help with dealing with the violence in the city.

By Amanda Raymond amanda.raymond@salisburypost.com SALISBURY – A local business will be collecting donations to help the family of a 7-year-old who... read more