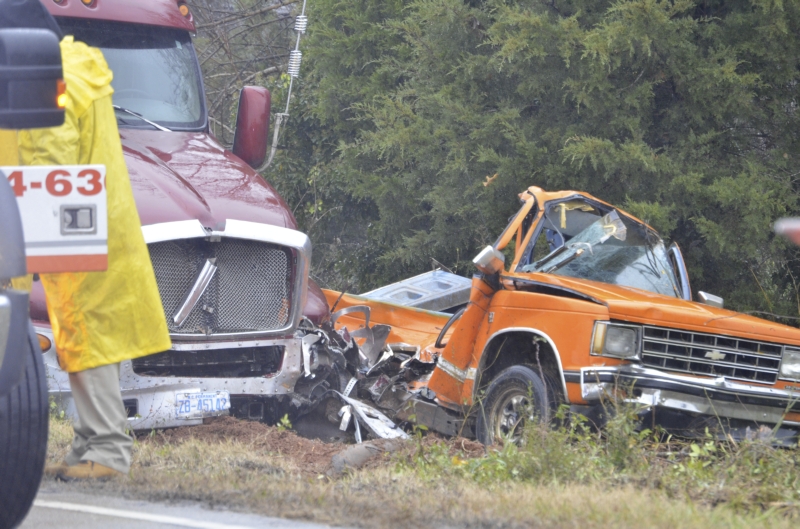 The driver of this orange pickup, Michael Uptain of Mooresville, told the Highway Patrol he hydroplaned at the intersection of NC 152 and Wilkinson Road in Mooresville. Shavonne Walker/Salisbury Post

MOORESVILLE — A Mooresville man was injured Tuesday after his pickup collided with a tractor trailer at the intersection of N.C. 152 and Wilkinson Road, near the former Mooresville Dragway.

Michael Uptain, 21, told troopers he didn’t recall much about the incident, but believed his 1985 Chevrolet pickup hydroplaned at the intersection.

Uptain was traveling west on N.C. 152, said Trooper S.L. Herrin, when he collided with a tractor trailer driven by Jeremy Watkins, 40, of Albemarle. Watkins was traveling east.

The force of the crash moved the vehicles 140 feet from the point of impact. Both vehicles came to rest on the side of the road.

Contrary to early reports of Uptain being thrown from the truck, Herrin said Uptain was trapped inside his vehicle. Atwell firefighters were able to free the Mooresville man and get him onto a stretcher and into a waiting ambulance.

Evidence at the scene shows Uptain was making a left turn onto Wilkinson Road.

Herrin said he attributes the crash in part to the tires on the pickup. He said all four of Uptain’s tires were of a different model, making the vehicle unsafe.

Neither speed or alcohol were factors in the crash.

Uptain did have several gashes to his head after hitting his head during the crash. The force of the impact completely destroyed the top of the pickup.

It’s not clear if Uptain was wearing his seatbelt, the trooper said, because the man was already out of the vehicle when the trooper arrived on the scene.

Watkins was not injured, Herrin said.

He said the first call about the crash was made around 12:38 p.m. and N.C. 152 was blocked to traffic until 3:15 p.m. Some motorists were able to detour around the accident.

Uptain was charged with improper turn and unsafe tires. He was taken to Carolinas Medical Center NorthEast.

Officials say Uptain also had an outstanding warrant out of Stanly County.