Chicken and dumplings: In case you don’t want to make your own 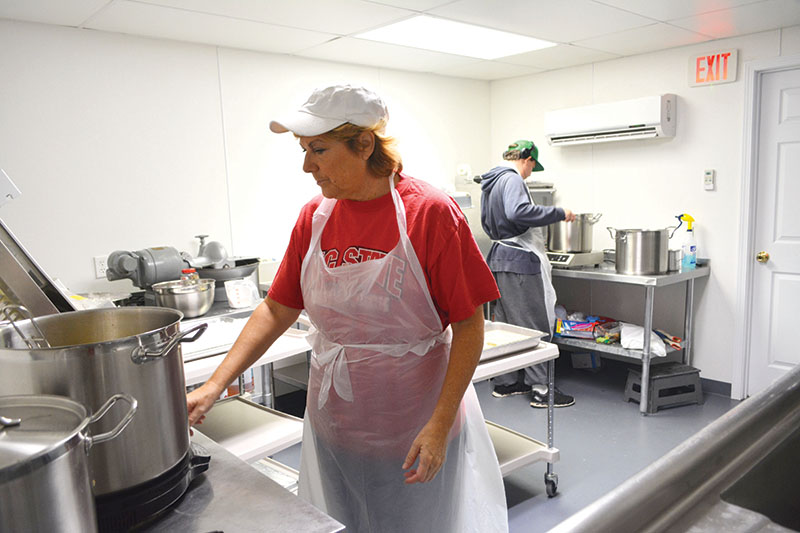 Julie Blalock and her son, Link, make chicken and dumplings in their commercial kitchen in Rockwell. Julie is the daughter of Verne McCombs, and has added chicken and dumplings to their regular offerings of McCombs and Co. pimento cheese, chicken salad and slaw during the winter months. Photo by Susan Shinn, for the Salisbury Post.

Longtime fans of McCombs and Co. pimento cheese will be thrilled to know that, since the weather is cooler now, the company’s chicken and dumplings are available.

Julie Blalock and her son, Link, work in the commercial kitchen of their Rockwell home three days a week. Some days, they make pimento cheese — regular and jalapeno. Other days, they make chicken salad. Link takes care of making the slaw himself.

But the days reserved for chicken and dumplings are the busiest of all. First, they cook two pots of chicken — 10 pounds of dark meat in one, 10 pounds of light meat in the other.

They cool the chicken, tear it apart, and hold it in hot broth. They chart the temperatures all along. Then Julie makes dumplings the old-fashioned way with dough. But she recently purchased a dough sheeter, which Link calls her new toy.

“When I decided to really get into chicken and dumplings, I wanted to buy one,” Julie says. “All that rolling will kill you.”

She found a used one which works perfectly.

“Isn’t that just the coolest thing?” Julie says, watching a ball of dough emerge as a nice, thin sheet. “I just love it. It saves a lot of time and effort.”

She adds chicken base to help the chicken and dumplings be nice and thick. She adds heavy whipping cream as a finishing touch.

“It just makes it good and rich,” she says. “It just gives it that extra oomph.”

While they cool, the chicken and dumplings are fairly liquid — but Julie warns that they’ll set up like cement. Adding water or chicken broth or milk before you eat it works out splendidly, she says.

Julie and Link’s roots in McCombs and Co. run deep. Julie’s dad, Verne, retired from McCombs Grocery in 1999. Her cousin, Kim Shores, took over the pimento cheese business until the end of 2013. In turn, Kim asked Julie if she’d like to take over from her.

“My husband and I talked about it,” Julie says. Jeff Blalock works in maintenance with NGK Ceramics in Mooresville. “So we built this commercial kitchen in our basement. We started with the pimento cheese and added the slaw.”

They added chicken salad last year, and this is the first full year of making chicken and dumplings.

“We started on a very limited basis,” Julie says. “We are easing into it. It takes awhile to get the process down.”

Sadly, the chicken and dumplings are not gluten-free, but everything else on the McCombs menu is, Julie notes.

Throughout the cooking process, Julie tastes the product for flavor and doneness. Julie and Link’s work is carefully monitored by the state. Each time they cook, Ashleigh Austin, a meat and poultry inspector with the state of North Carolina, comes by to observe.

“Food regulations are a pill, but necessary,” Julie says. “But the state has been wonderful to work with — everybody I’ve dealt with from the very beginning has been so helpful.”

Each week, Ashleigh visits the Blalocks’ commercial kitchen, along with three small plants in Albemarle. Each day the Blalocks are preparing food, Ashleigh stops by.

“The thing that motivates me and makes this so interesting is making food safe for the consumer,” she says. “You have to eat to stay alive, so it’s important that your food is healthy.”

She adds, “Of course I get to know these folks well. All of the plants I work in have fewer than 10 employees. We all have great working relationships, and I feel like that’s very important.”

“It’s so funny to be called a plant because we’re so little,” Julie says.

“It gets nuts on chicken and dumplings day,” Julie says of the space, that can get cramped quickly with all of the equipment, trays, pots, and, of course, food.

Julie gets tickled at the emergency exit plan (you go out the same door you come in — the other door’s a bathroom door), and the lighted exit sign that hangs above that same door.

Julie admits that she has picked up a couple of extra pounds since they started production — but she’s not sure whether that’s from a recent food or Thanksgiving or tasting dumplings here and there.

“But I don’t eat that many,” she admits, “not after you look at them all day.”

Julie says they’ll keep making chicken and dumplings as long as the weather stays cool and customer demand is strong.