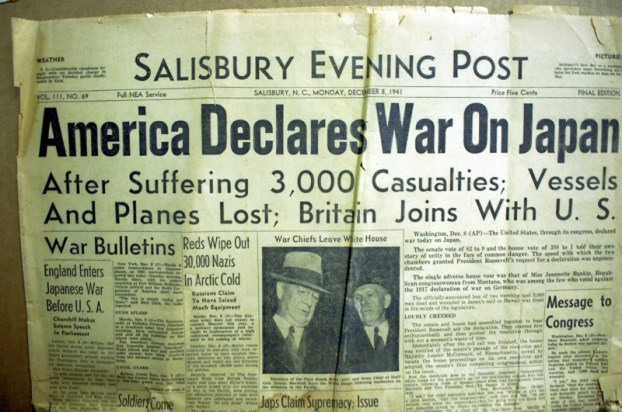 Yesterday: Pearl Harbor, the day after

David Harrison of Salisbury has a collection of old newspapers, including a Dec. 8, 1941, edition of the Salisbury Evening Post that gave the sobering news about the attack on Pearl Harbor and United States’ entry into war with Japan. Harrison said he obtained this particular edition, his most prized, when he was sitting in a bar one night and a friend asked whether he could cover his tab. Harrison asked the man whether he had anything to trade for paying his bill, and the guy offered him several collectible newspapers, including this one. Harrison thinks he made the deal in 1979 at the old Capone’s. ‘A picture is a time machine,’ he says. Wednesday marks the 75th anniversary of the Japanese attack on Pearl Harbor. Harrison is still collecting newspapers. The latest one was the edition marking President-elect Donald Trump’s victory.

Yesterday: A look back at Spencer’s downtown park

Talk has surfaced recently about creating a ‘Central Park’ in downtown Salisbury, but the town of Spencer had its own... read more