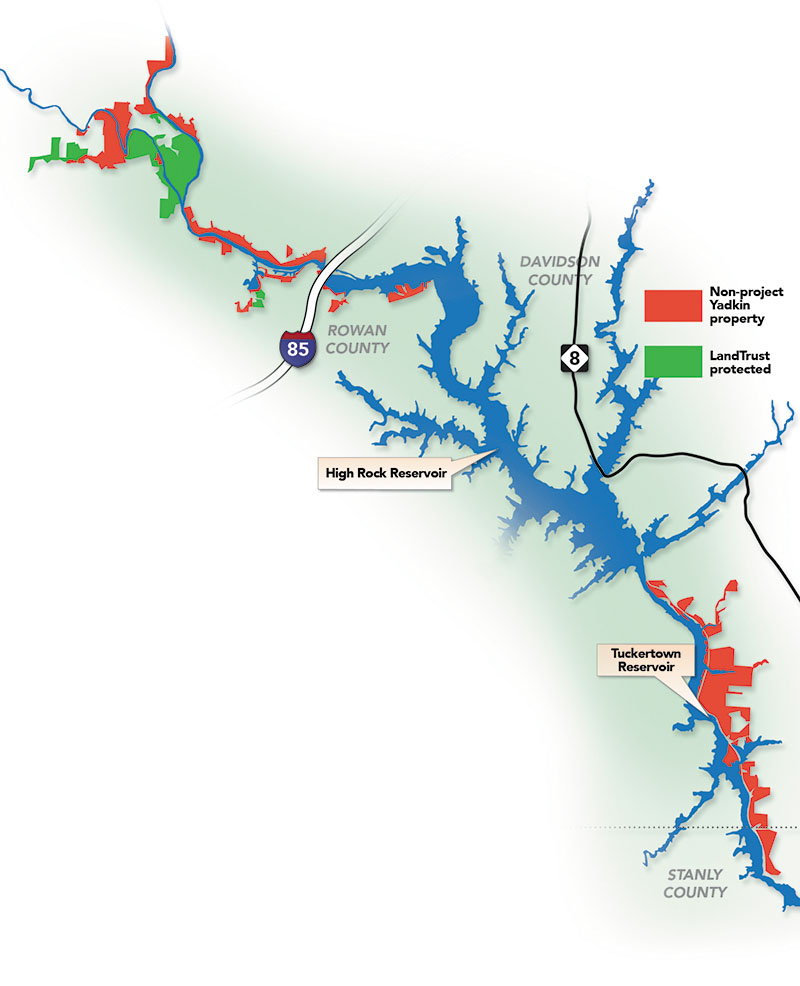 When federal regulators granted a long-term operating license to Alcoa in October, the LandTrust for Central North Carolina leapt into action.

Now, the LandTrust is in the first stages of an effort to raise millions of dollars to conserve 4,700 acres of land held by Alcoa.

Prior to obtaining its federal license in September, Alcoa signed an agreement with a number of groups, including the LandTrust, that requires the donation or sale of thousands of acres near the Yadkin River. The LandTrust aims to buy and conserve 4,700 acres spread throughout Davie, Davison, Rowan and Montgomery counties. The purchase price is $16.2 million, said LandTrust Executive Director Travis Morehead.

Morehead said the purchase would be the “single largest conservation project” in the Piedmont of North Carolina. It would help preserve the watershed that provides drinking water for the Salisbury-Rowan Utilities System and others, he said.

“I don’t think you’ll find another project that rivals the number of acres that are on the table right now,” he said.

He said the LandTrust’s efforts to buy the properties near the Yadkin River date back years, but only recently ramped up because of the final license for Alcoa, which plans to transfer its dams to Maryland-based Cube Hydro.

If successful, the purchase would more than double the amount of land owned by the LandTrust, which currently sits at about 3,000 acres. It would be close to 25 percent of the land conserved by the LandTrust during the past 21 years, Morehead said.

If the LandTrust isn’t able to raise the $16.2 million, Morehead said the land could be sold “on the open market.” It could lead to commercial development near the river, he said.

“It’s really an elephant and you’re trying to eat it one bite at a time,” he said.

For his part, Yadkin Riverkeeper Will Scott says Alcoa shouldn’t sell the land for the $16.2 million price tag.

“After the hundreds of millions of dollars Alcoa has made off the Yadkin River, free of charge, they should be donating this land or, at a minimum, selling it at a deep discount that reflects the debt they owe to the people of North Carolina for decades of free use of this public resource,” Scott said. “I think that protecting land is one of the best tools to ensure water quality long term.”

A map provided by the LandTrust shows the land it aims to buy consists of slivers and clusters in various places along the Yadkin River, High Rock Lake and Tuckertown Reservoir.

There’s a jagged portion of land that stretches from the northwestern corner of Montgomery County to an area in Davidson County near High Rock Dam. A couple pieces of land are in the Dukeville area. A few pieces sit between Grants Creek and Interstate 85. A long portion in Davidson County stretches from I-85 to a split in the Yadkin River. The remaining parcels surround the confluence of Davie, Davidson and Rowan counties.

“Looking at the map, they may look like little slivers, but they are pretty big parcels,” Morehead said.

Many people involved with the LandTrust over a period of years deserve credit for getting negotiations to their current point, he said.

Morehead said the LandTrust hasn’t decided about the exact uses of the land if it’s purchased. He listed trails, hunting and other types of public access as likely uses.

‘You miss out’ if you don’t attend the Cleveland…