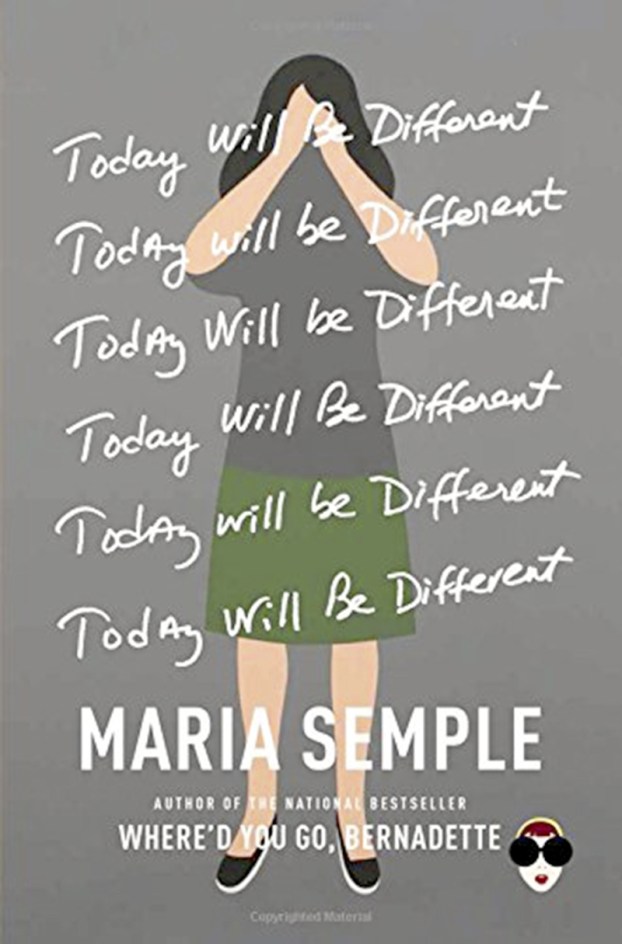 ‘Today Will be Different’ in a funny (odd) way

“Today Will be Different,” Eleanor Flood decides. “Today I will radiate calm. Kindness and self-control will abound. … Today I will be my best self, the person I’m capable of being. Today will be different.”

And author Maria Semple does her best to make that prediction come true in the comic novel, “Today Will be Different.”

Semple, the author of a similarly funny book, “Where’d You Go, Bernadette,” uses her knack for turning everything on its head to bring Eleanor to shocking revelations, madcap actions and a shift in her world view.

Semple’s heroines tend to be smart, formerly successful and living the good life. Eleanor, an animator, once had her own TV show, “Looper Wash,” but is now taking care of her third-grade son, Timby, and not working on a graphic memoir a publisher wants.

Her husband, the perfect man, is a surgeon specializing in hand and arm injuries; among his clients are the Seattle Seahawks. Everybody loves Joe, who  puts up with Eleanor’s quirky moods, frequent sarcasm and odd sister. They are happy atheists whose son attends a posh private school.

Well, Eleanor’s family is odd all around. Sister Ivy is married to a pseudo-wealthy, precise, tradition-bound snob from an old New Orleans family. He is ridiculously called Bucky and his behavior is appalling.

Bucky runs Ivy’s life, and it does not include weird Eleanor and her classless, socially awkward behavior.

Eleanor raised Ivy, or they raised each other, because their mother died when they were young, and their alcoholic gambler father really had no clue. This is the poignant part of the story. It explains, to a great extent, why Eleanor is like she is.

All the action in “Today Will be Different” takes place on one eventful day that includes personal injury, an attack by a police dog, a farcical scene with keys and a phone in a bait bucket.

As Eleanor sets out on her different day, the first wrinkle is Timby’s school calls — he had a stomachache. Not good, Eleanor thinks. He’s faking it again to avoid something, so she drags him to the doctor.

She doesn’t know what to do with him because she has a lunch date with a friend she cannot stand, and starts sending desperate messages to her to cancel, reschedule, then un-cancel.

When she finally arrives for the lunch date, it’s not the unliked friend — it’s worse — it’s a man she fired from her show years ago because he couldn’t do the job. She barely remembers him and becomes crazed to find out he is now a sought-after artist.

And then things get stranger. When she goes to Joe’s office, his staff greets her with surprise: “oh, you’re back from vacation!”

But, there’s no vacation. Joe had his usual breakfast and departure. Where is he? He must be having an affair.

As if that’s not enough, she gets dragged to the outdoor sculpture show where the fired artist is in an exhibit.

Then there’s an episode with her poetry tutor, caught doing a demo for “fried steak fish” at Costco.

And the dog, Yo-Yo, is in tow — or not, and Timby’s with the sculptor and there’s a bad fall, a dented statue and a large bump.

Eleanor, at her best, is a bit of a wild card. When she gets anxious, she talks too much. When she feels criticism coming on, she beats it to the punch. She’s jittery, changeable, moody. Her humor is self-protection and a mask for the sadness deep within.

As the day gets weirder, the encounters more bizarre and Eleanor’s plans more haphazard, laughter ensues. Her further adventures include crashing a sex-addicts’ meeting, the Pope’s visit to Seattle and a set of pilfered keys that leads to a scene from a comic farce.

Semple writes so well of the modern-day dilemmas, the demands adults have to meet, the challenges, the things never expected, or planned for.

That Eleanor can navigate the crazy map that keeps changing right before her is what makes this wild run so much fun.

When the reader discovers the ultimate problem Eleanor has to face, it’s sweet and insane at the same time, as is her response.

If it feels like a TV episode or a movie, that’s because Semple was a consulting producer for “Arrested Development” and once wrote an episode of “Beverly Hills 90210.”

She can create humor, along with amusing neuroses as well as anyone writing today. Reading one of her books is the kind of fun that will distract you from the scary real world.

Repticon, a nationwide promoter of reptile and exotic animal expos, brings its unique blend of vendors, breeders, and educators back... read more