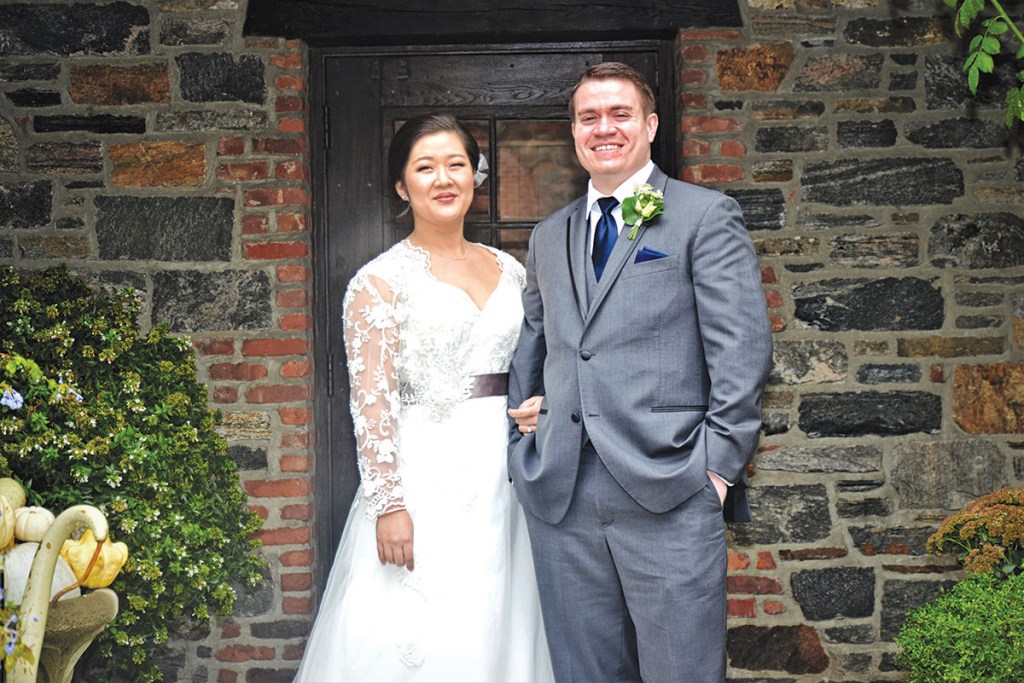 Miran Kaleigh Kim and John Arthur Ward were united in marriage Oct. 22, 2016 at Blue Hill at Stone Barns, Pocantico Hills, New York. The elegant Blue Hill Restaurant is located on a working four-season organic farm 30 miles north of New York City and is recognized as one of the World’s 50 Best Restaurants.
Given the couple’s passion for music and multi-cultural cuisines, the festivities began with a pre-ceremony champagne social. Servers circulated among the guests with trays of drinks and a variety of hors d’oeuvres, many liberally sprinkled with caviar.

At noon and due to an unexpected rain, the guests were shown into the solarium decorated as a wedding chapel in lieu of the planned garden wedding. The mothers were seated to the Andante cantabile from Beethoven’s String Quartet Op. 18, No. 5. The processional was the Intermezzo from Mascagni’s Cavelleria Rusticana.

The wedding was officiated by the Rev. Norma Moutal.

The bride was escorted by her father. Her sister, Minna Kim, was her maid of honor.

A string quartet, friends of the bride and groom, consisted of Sarah Vonsattel and Qianqian Li, violins; Jihyun Son, viola; and Julia Bruskin, cello, all members of the New York Metropolitan Opera Orchestra. The quartet played a variety of classical music with special arrangements by Tim Mauthe, a friend of the bride and groom.

The bride and groom recessed to the Prelude from Grieg’s Holberg Suite.

Guests were then shown to an adjacent banquet room for a luncheon reception offering selections from the local field and market. The five-course gourmet meal was prepared for the epicurean palate.

To cap off the festivities, the bride’s parents hosted dinner at The Outside In Art Gallery in Piermont, N.Y., where a traditional Korean wedding ceremony was held followed by a buffet of Korean fare.

The bride is the daughter of Daniel and Donna Kim of New York City. Miran attended The Juilliard School of Music’s Pre-College Division, serving as concertmaster for all three of Julliard’s orchestras. She spent her summers at various music camps. In 2008, she began undergraduate studies at Juilliard, transferring to the Cleveland Institute of Music (CIM) in 2009. After receiving her bachelor of science degree at CIM, she began graduate studies at Rice University’s Shepherd School of Music in Houston, Tex. After a year at Rice, she held positions with the Houston Symphony and the Grant Park Festival Orchestra. She joined the Metropolitan Opera Orchestra in 2014, where she plays in the 1st violin section.

The groom is the son of James William “Bill” and Celeste Ward of Salisbury and Lucy Ward of Raleigh. He is the grandson of Mrs. Louise McMurry of Shelby. John graduated high school at the North Carolina School of the Arts in Winston-Salem, where he played viola. He attended several sessions of the Eastern Music Festival in Greensboro. After receiving his bachelor of science degree in music performance from the University of North Carolina at Greensboro, he lived in Raleigh where he gave private music lessons and played with the North Carolina Symphony. He visited Salisbury when the NC Symphony came to Catawba College giving concerts for area school children. He also attended Cleveland Institute of Music (CIM) where he earned his Masters Degree in music. He later moved to Houston, Tex. to teach music in the public school system and give private lessons. Simultaneously, his interest in food and especially baking began to take priority. In New York, in addition to his music teaching and performance, John is employed as a bakery chef by the renowned Per Se Restaurant.

The couple’s planned wedding trip to Napa Valley, California, will be highlighted by dinner at The French Laundry Restaurant, owned by Thomas Keller of Per Se, as well as visits to local wineries. Upon returning home, they will reside in Manhattan.