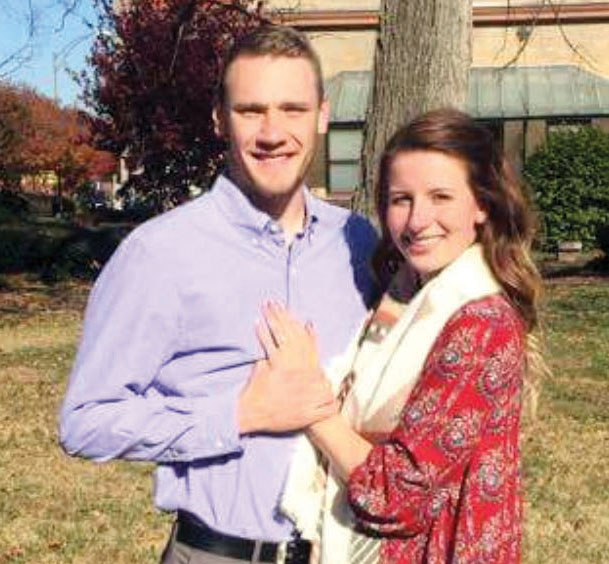 If you spotted some unusual activity in downtown Salisbury last weekend, it was probably part of the McCorkle family scavenger hunt.

Heather McCorkle, along with daughter Kayla and Kayla’s boyfriend, Peter Mueller, planned the hunt for Thanksgiving weekend since the rest of the McCorkle family would be visiting from Pennsylvania. Little did Kayla know she was in for a big surprise.

Mueller came to Heather several weeks ago for help with planning a spectacular proposal. He wanted to include all of Kayla’s family, so they came up with the idea of a downtown scavenger hunt. The family would split into teams ­­­— boys vs. girls. The hunt consisted things like hugging a store employee with their permission, walking like ducks across the street and taking photos with various items in the downtown area.

When the end of the hunt was nearing, Mueller escaped and headed to a friend’s house to change into nicer clothes. Then he headed to the train station, where the hunt would end.

“I was so nervous waiting for her to arrive, but Kayla is a beautiful person inside and out, and I couldn’t imagine spending the rest of my life with anyone else,” Mueller said.

Kayla was blindfolded the entire ride from the downtown square to the train station. When she removed the blindfold, Mueller was in front of her, surrounded by her family members, who were holding balloons.

A proposal ensued, and soon Kayla was wearing a diamond ring.

“After I said ‘yes,’ the balloons were released. I was crying and I never thought I would be a crier,” Kayla said.

“My uncle said everything happens for a reason,” Kayla said. “I believe that it was meant for me to move here in order to meet Peter.”

Kayla will graduate from the University of North Carolina at Charlotte in May with a degree in criminal justice. Mueller works in property maintenance and is a member of the Army National Guard. He lives in Randleman. They are thinking about having a beach wedding in May of 2018.

“It will be a family wedding, mostly, but my family is huge so it will probably be big!” Kayla said.