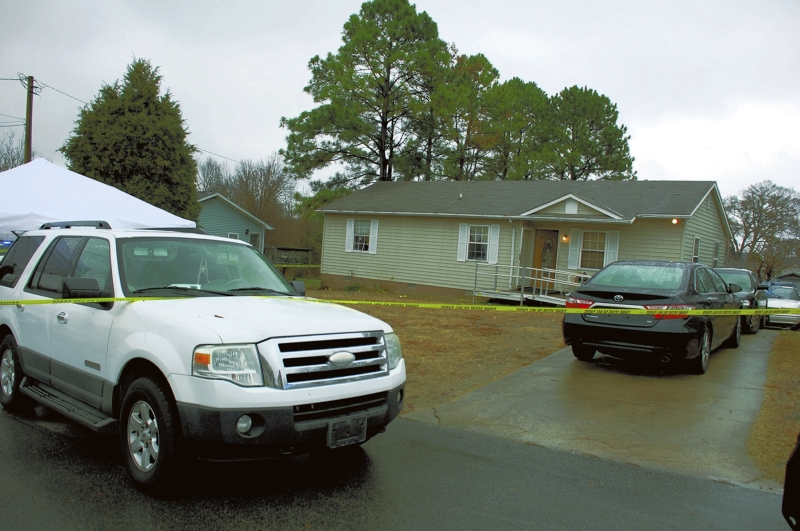 Mark Wineka/Salisbury Post Shots fired at or into this house on Harrel Street early Sunday morning led to the death of a 7-year-old girl, who was reportedly sleeping, and the wounding in the leg of her 56-year-old grandmother.

SALISBURY — Salisbury Police continue to investigate the shooting death Sunday of a 7-year-old girl, who apparently was sleeping at her grandmother’s home on Harrel Street when it was hit by multiple gunshots.

The girl’s 56-year-old grandmother, Shirley Robinson, was wounded in the leg and taken to Novant Health Rowan Regional Medical Center for treatment.

The girl was identified as A’Yanna Allen, reported to be a second-grader at Koontz Elementary School.

Robinson and A’Yanna were reported to be sleeping together in the same bedroom.

Salisbury Police also are working an additional homicide that occurred earlier Sunday morning in the parking lot of the Firewater Restaurant and Bar at 122 Avalon Drive. In that shooting, 22-year-old Sharod R. Mathis of Spencer died. (See separate story.)

Police were called to 200 Harrel St. at 4:19 a.m. Sunday in response to two people being shot.

When officers and emergency medical service personnel arrived, they located the 7-year-old girl, who had already died.

Lower glass on a front bedroom window on the Harrell Street home looked to have been shot out. Police collected as evidence bullet casings on the ground in front of the house, and there appeared to be some bullet holes in the house’s siding.

Harrel Street is located off Old Concord Road in the Fairview Heights section of Salisbury between Arlington Street and the Interstate 85 overpass.

The State Bureau of Investigation is helping Salisbury Police investigators.

Several neighbors interviewed Sunday afternoon said the shots, which they generally put between 3:30 and 4 a.m., woke them up. One woman said she heard at least four and probably five shots that sounded like a jackhammer.

She and another neighbor said they also heard one car, possibly two, speed off.

“I was scared to look out the door,” an elderly woman said. “I wasn’t going out.”

She made the sound of a gun firing several times in describing what she heard “and then gone,” the woman said. “Everybody was scared to look.”

Another neighbor said he often saw the little girl playing in the home’s front yard, and he called the shooting “hideous.” He said the shots woke him up, and “I started looking out carefully.”

“By that time, I could hear sirens coming.”

Another neighbor said what he heard “had to be a shotgun.” His wife said a woman was screaming outside the home in question after the gunshots. A neighbor also reported hearing two other much quieter shots sometime after the initial louder bursts.

A longtime resident said his section of Harrel Street is usually quiet, but he expressed concerns about new people moving in.

“We’re getting some rowdy people from somewhere else,” he said.

Neighbors to the shooting asked to remain anonymous.

On the rainy Sunday, investigators had erected a portable tent on Harrel Street outside the house where the shootings occurred.

A’Yanna Allen’s father, the late Antonio Jermaine “Shug” Allen, also was shot and killed Christmas Day 2009. He had been attending a large party on North Jackson Street when he was wounded and later died, according to police reports at the time.

Shug Allen was 27 at his death.