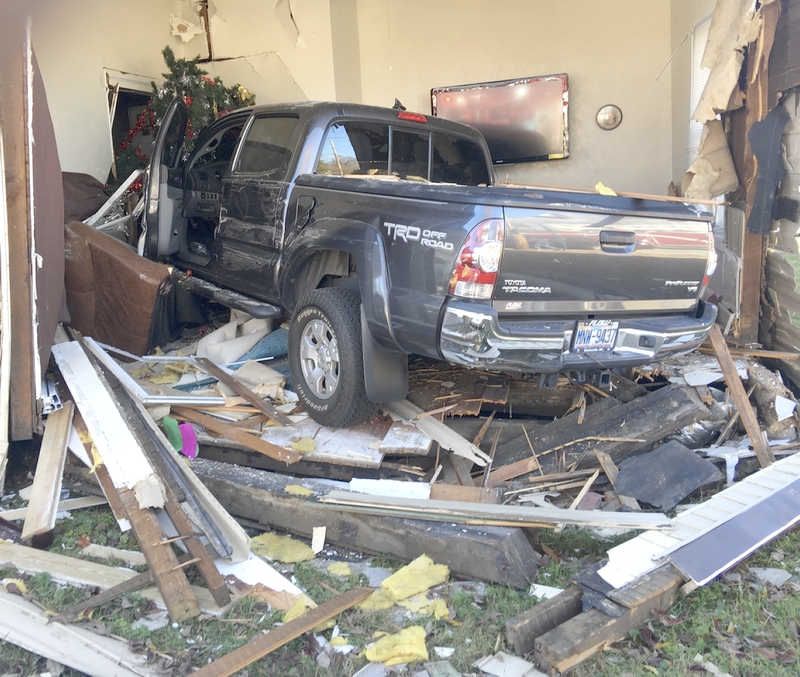 Police are looking into whether Edward Lee Bowles, 73, had a medical issue Friday after he sideswipped two cars at the intersection of Martin Luther King Jr. Avenue and Bringle Ferry Road and struck this home. Monica Tyson, who lives at the home with her two grandchildren and boyfriend, was not at home at the time. Submitted photo

SALISBURY — Monica Tyson is thankful that her grandchildren and boyfriend were not home Friday afternoon when a pickup came crashing through her living room. It appears the driver may have had a medical issue, police say.

The crash is under investigation after the driver, Edward Lee Bowles, 73, was driving his Toyota Tacoma along Bringle Ferry Road headed away from town.

Salisbury Police Sgt. B.M. Casper said they are working to verify whether Bowles had a medical issue. Officials will continue to investigate the crash to determine what exactly happened.

The officer said Bowles swerved to avoid hitting a vehicle that slowed in the intersection, he sideswiped that vehicle and another. He lost control of the pickup and struck the house, which sits at the corner of Bringle Ferry Road and North Martin Luther King Jr. Avenue.

Bowles was conscious at the scene and was taken to Novant Health Rowan Medical Center.

The crash occurred at 12:39 p.m., but three hours later Tyson still couldn’t go into her house. She was waiting on a code enforcement officer to determine whether it was safe for her to go inside to at least retrieve some belongings.

She said she received a call from her neighbor who said “you need to get home now.”

The neighbor told Tyson that a car ran through her house, but Tyson thought she was mistaken and meant a vehicle hit her house.

Tyson said she cried and screamed when she saw the pickup inside what used to be her living room. The truck had crashed all the way through the living room, destroying the room and all of its contents including her furniture, Christmas tree and all of her grandchildren’s presents.

The truck stopped at a bathroom wall, located on the other side of the living room.

Her five-year-old granddaughter and five-month-old grandson would’ve been in that living room, to which Tyson said she is thankful they were not.

She’s not sure what she’ll do. The local chapter of the American Red Cross is assisting her.