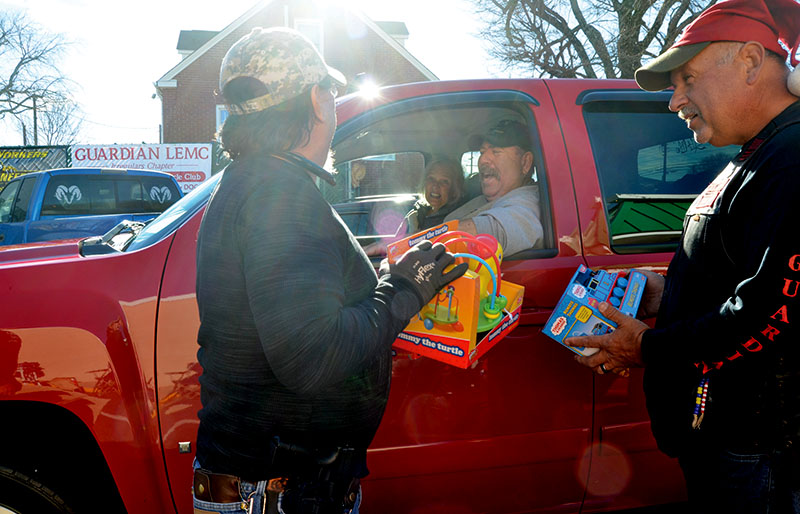 Bob and Diane Burton of Salisbury drop off gifts Friday during the Toys for Tots donation drive held Friday at Krispy Kreme. Coordinator Arbe Arbelaez, left, and volunteer and longtime law enforcement officer Mark Shue receive the donations. The men along with others will camp out on the roof of the building all weekend to collect toys, which will go to area children at Christmas. Shavonne Walker/Salisbury Post

SALISBURY — Bob Burton slowly drove into the entrance of Krispy Kreme with his wife Diane riding in the passenger seat. The Salisbury couple were all smiles as they handed over two new toys — a Tommy the Turtle bead runner and a remote Thomas the Tank Engine.

The gifts will be given to a local child this Christmas through Toys for Tots, a program run by the U.S. Marine Corps Reserve. Local coordinators Arbe and Ann Arbelaez have worked to collect toys all year long, this weekend’s donation drive is expected to bring in a lot more toys for the children.

“It’s for the kids,” Bob said as to why they give each year.

“Every kid needs something,” Diane added.

The decision to buy a toy for a child is easy for the couple, Diane said others should think what “if you have a child who gets something for Christmas, think about a child who doesn’t.”

Toys for Tots supporters — longtime law enforcement officer Mark Shue, retired police officer Alan Waller, his son Chris Waller, who is a firearms instructor and others will stay on the roof through Sunday accepting toys at the doughnut shop.

Krispy Kreme will stay open all night and morning while the men camp out.

Arbe is one of the longest serving coordinators in the area with 15 years collecting and distributing toys to local children. He and many of the supporters have been camping on the roof for about nine years.

Shue recalled the first year he volunteered as a Salisbury Police officer. He was working on his own toy drive community project, but didn’t know how to go about distributing them. He was connected with Arbelaez through then Police Chief Mark Wilhelm.

Shue has been volunteering on and off throughout the years.

Chris Waller, owner of Voodoo Custom Weapons, has been volunteering to help collect toys for about seven years now. When Arbe contacted him this year to say they needed some extra hands, he recruited some others including friend Chris Graham, owner of Race Engineering.

“We always support as many local charities as we can,” Graham said.

Volunteers will be on the roof until Sunday around 3 p.m. collecting toys for children ages zero to 12.