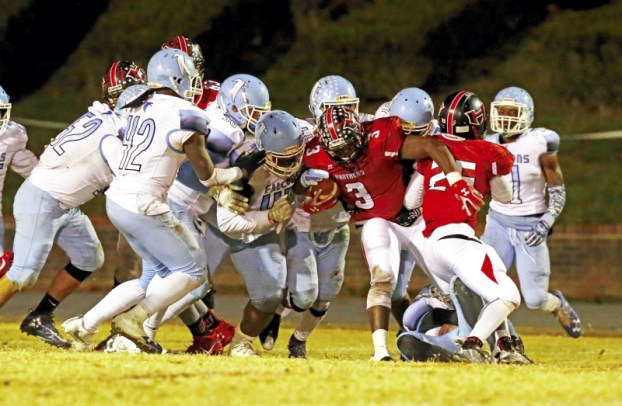 Hibriten running game too much for West Rowan

rushing and six touchdowns as Hibriten High roared past West Rowan, 49-20, in the

third round of the 3A state football playoffs at Hibriten on Friday night.

The West No. 1 Panthers extended their record to 14-0, setting a school record for

wins in a football season. Hibriten will play host to South Point, which defeated Pisgah,

42-0, in the other semifinal game, next Friday for the Western championship and a berth

in the state title game.

West Rowan, which finished 10-4, scored the first and last touchdowns of the

Witherspoon was sensational for the Panthers. The 170-pound sophomore ran for

touchdown pass from Jamar Ferguson — in the first half alone.

West Rowan never seriously threatened the Panthers in the second half.

on 19 carries. Jarius Cotton added 74 yards and one score on nine carries.

Meanwhile, the West Rowan offense was stymied much of the night by a

with 84 yards on 19 carries, but the team finished with only 78 yards rushing.

and a 30-yard scoring toss to Kortez Meeks.

“This obviously is a great win for us,” said Hibriten coach Clay Lewis. “Our

need to correct, but West Rowan has a very good team.

“I think were a little tight in the beginning,” continued Lewis. “I wasn’t pleased with the way we

started. Our defense really made some big plays, though.”

“Hibriten is a great team,” said Nixon. “They run a class program here, and they were

simply the better team tonight. But I’m also very proud of my team, especially the seniors. This is a special group to me. We’ve won 20 games in two years and have advanced in the state playoffs.

“Things did not go our way tonight, but we played with class and heart,.” concluded Nixon. “And that’s all you can ask.”

Dudley comes from behind to roll past Davie County

By Brian Pitts For the Salisbury Post MOCKSVILLE — Dudley’s unbelievable tear from the middle of the third quarter on... read more