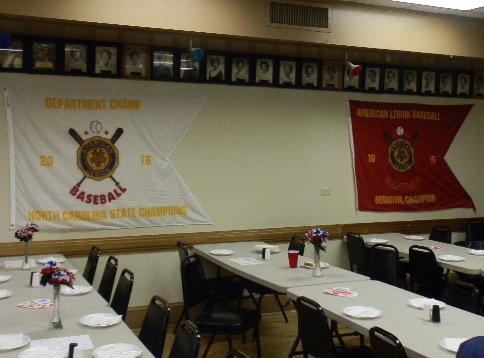 SALISBURY — Two of the Harold B. Jarrett American Legion Post’s most-prized possessions — flags recognizing Rowan County’s winning Legion baseball team — have disappeared, and the Legion Post is offering a reward to get them back.

“They’re one of a kind,” said post member Charlie Frick, a private investigator, “so they can’t be replaced.”

One of the flags honors the Rowan Legion team’s State Championship, and the other honors its Southeast Regional Championship. The team was runner-up in the national tournament last summer.

The post, which regularly rents out its building on Lincolnton Road, has video of two men taking the banners down during a birthday party on Nov. 19, said Frick and Wayne Kennerly, another member. They have not been able to find the man who rented the space, Angel Eduardo Carrillo Lopez, who listed an address on Town Court.

Kennerly said the renter may not have wanted the flags displayed during the party. But the flags were not left on the premises.

Frick said the Harold B. Jarrett Post is offering a reward for information leading to the recovery of the flags and/or the arrest and conviction of the people who took them. But members are more interested in getting back the flags than prosecuting anyone. “If we get our stuff back, as far as I’m concerned, we’re done with it,” he said.

Anyone with information about the flags should call the Harold B. Jarrett American Legion Post at 704-637-1722.