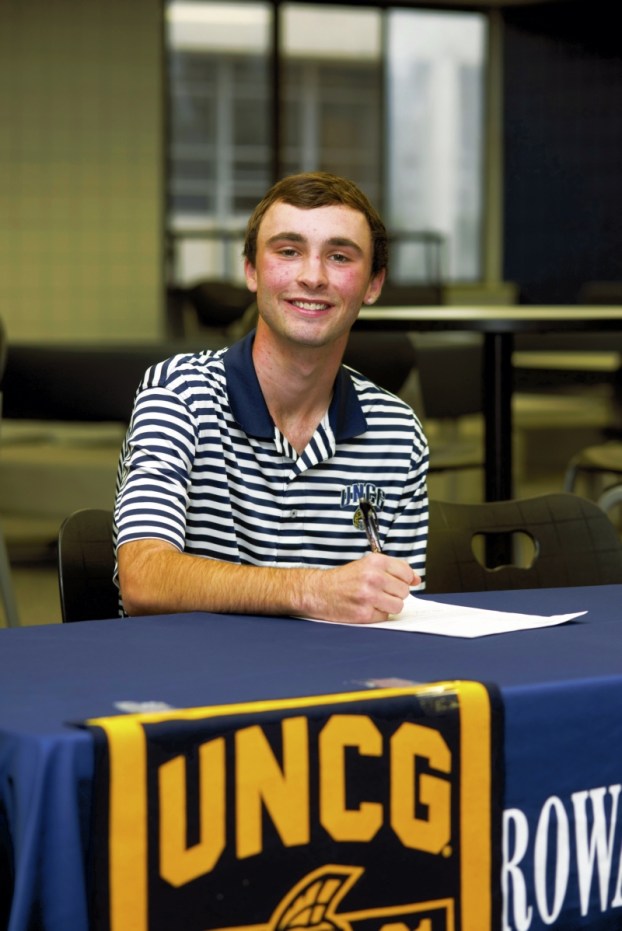 Nick Lyerly holds true to his commitment to UNCG GRANITE QUARRY — The giant cake read “Congratulations,” but it was also of the birthday variety.

Becky Lyerly’s birthday was Wednesday and her husband, Roger, celebrated his birthday on Monday. Their son, Nick, presented them a gift that they’ll always remember: A college scholarship.

Nick, an East Rowan High School senior, officially had his signing party on Wednesday at the school’s media center, confirming his months-ago commitment to continue his education and brilliant golf career at UNC Greensboro.

Lyerly verbally committed to UNCG last fall, and stuck with his decision, even though some figured that after his amazing 2016 golf achievements, he may have been swayed by new offers.

“Once I had committed verbally, everyone respected that decision and there were really no other offers,” said Lyerly. “But even if there had been, I would have stuck with my decision. It’s a good situation for me. I really like UNCG, so I had no reason to change my mind. Coach (Terrance) Stewart has built a good program and I really hope that I’ll fit right in there.”

Fit in? Stewart and UNCG are no doubt thrilled to sign Lyerly, who in June, became the youngest golfer to win the North Carolina Amateur championship in Chapel Hill. That’s not a junior tournament. The event is filled with the best amateur golfers in the state, including many wily veterans. Lyerly shot 70-71-68-71 — 280, to finish 8-under at Governors Club. He won by a stroke.

“That’s one of the most prestigious amateur tournaments in the state and he played against men, not just juniors,” said swing coach Brian Lee, the head pro at Warrior Golf Club. “That’s the one that really has catapulted him within the amateur ranks — not just in the junior ranks.”

In one of his rounds on the big stage at the Big I, Lyerly shot a blistering 7-under par 64. He traveled to California with Justin Emmons of Asheboro, also a top junior player. Emmons has also signed with UNCG and the two will be roommates next fall.

And backing up to last spring’s high school season, Lyerly won the South Piedmont Conference individual title, finished second in the regionals and fifth in the state. He and Logan Shuping, now a freshman at East Carolina, led East Rowan to a runner-up team finish in the state 3A tournament.

Corbin Hills Golf Club has always been Lyerly’s home course, starting with trips there with his dad when he was still in pre-school. He also played baseball, and was even on a travel team until he was in the fifth grade. But he soon gave up baseball.

“He was a second baseman with no power, not much speed and not a great arm,” Roger Lyerly said on Wednesday, “but it was his decision to give up baseball to play golf year ’round.”

The elder Lyerly recalled a day at Corbin Hills when young Shuping, already a friend, was golfing with he and Nick. “Logan had a year on Nick and his game showed it,” said Roger. “Nick asked, ‘how can I be as good as Logan?’ … and I told him, ‘you need to play golf all year long.'”

Nick took his father’s advice to heart and he was soon working with Corbin Hills pro Jay Hill.

“I met Nick when he was in the sixth grade and I was coaching the middle school team at Erwin,” said Hill, who now at Cabarrus Country Club. “I was fortunate to have worked with him for six years. In 2015, I took a job in Sylva (N.C.), but still had a home in Salisbury. He would send me videos of his swing and we’d get together when I came home and work on things. He’s quite a young man and I’m really, really proud of him.”

“He’s got the work ethic to take it to the next level,” said Lee. “Whatever we’re working on that week, as much daylight is left in the day, he’ll be out there working. And it’s paid off. Just look what he’s been able to accomplish in the last year or so.”

Lee adds that Lyerly has that special “it” factor when it comes to confidence.

“He’s understanding that he’s one of the best out there and the one that the others are gunning for in these tournaments,” said Lee. “He’s starting to realize that and he’s got that little something you’ve got to have — that confidence to the point where some people may call it cockiness — but it’s that belief in yourself that all the great ones have.

“If you’re on that 18th green with a one-stroke lead, y0u’ve got to be able to keep your emotions in check and focus in on your routine just like it’s the first hole,” continued Lee, who played college golf at Catawba. “He’s got the ability to do that. And he’s developed the ability to come up with a strategy to attack a course and post some low scores against very strong competition. He’s got all the tools to take it as far as he wants to take it.”

East Rowan’s golf coach, Rhett Teems, is obviously glad to have him. Shuping is gone, but Teems is hoping for another shot at a state championship next spring. Lyerly will be joined by returning All-Rowan County perfomers Bryson Sprinkle and Alex Miller, as well as others.

“We still have Nick this spring and we’re really looking forward to it,” said Teems. “Of course, our goal is to make it back to the states again.

“Nick has been a great influence on everyone, myself included,” continued Teems. “In and out of the classroom, a coach could never ask for anybody better than that kid. He’s been awesome.”

Lyerly took his signing party in stride on Wednesday, complete with his sheepish grin, but when pressed, did allow himself to look back a little.

“When I was little, my dad took me out there and I just instantly loved golf,” said Nick. “I don’t know why, but it just instantly clicked. I really enjoyed doing it and stuck with it.

“But I would definitely not be right here today without my parents and coaches,” Nick continued. “My dad, when I was younger, if I maybe didn’t want to go practice, he gave that little extra push to go practice. If he hadn’t done that, you just never know what might have happened. Jay and Brian, they both have helped me and mom, well she’s just always been there, supporting me, as well as my grandparents, aunt and uncle and everybody else.”