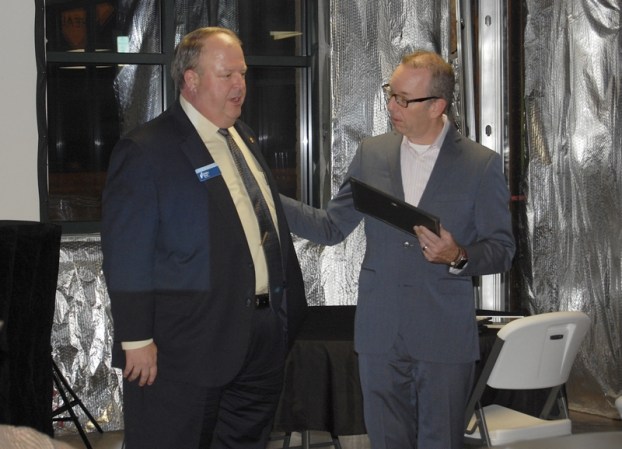 SALISBURY – Downtown Salisbury Inc. celebrated the past year and the people and businesses that work to improve the downtown area during a special event on Thursday.

Before presenting the awards, Greg Shields, president of DSI’s Board of Directors, talked about the achievements of the last year.

There has been $8.5 million of new private investment in the downtown area and 5 net businesses have been added. Twenty-seven net full-time jobs and four part-time jobs were added in the past year. Twelve businesses have redone their facades. Shields also mentioned that there were 1,546 volunteer hours that contributed to the downtown.

Shields said the new breweries in the area, including New Sarum and Morgan Ridge Railwalk Brewery and Eatery, are bringing in new visitors.

“Being somebody who lives downtown, works downtown, frequents the downtown, I’m seeing all kinds of people and faces at these establishments that I’ve never seen before in our downtown,” he said.

He also said there has been an increase in available living space downtown, and that will be the key to taking the area “to the next level.”

“…When you have people concentrated and living in that area, that will take development of street level commercial space really to a next level,” he said.

As far as things DSI is working on for the future, Shields said they are continuing with residential development and developing a downtown improvement plan in conjunction with the city.

They are also continuing work with Historic Preservation Partners Holdings LLC to develop the Empire Hotel into residential housing.

Shields said the developer is in the process of completing the all of the background paperwork and other necessary steps before actually working on the building.

“We feel very confident about this partner,” he said.

He said the work on the building may start in the third quarter of next year.

Shields also mentioned the downtown park, a project headed by the Robertson Foundation that will put an urban park in a city block in the downtown area.

After the updates, Shields presented the awards.

Director of the Year went to Mark Lewis. Sue McHugh and Bob Potter won the Downtown Leadership Awards. Volunteers of the Year were Sharon Earnhardt and Mary Miller James.

The Electric Elf is looking for lights!

It’s that time of year again. Christmas Carols fill the air and the nights are filled with the smell of... read more