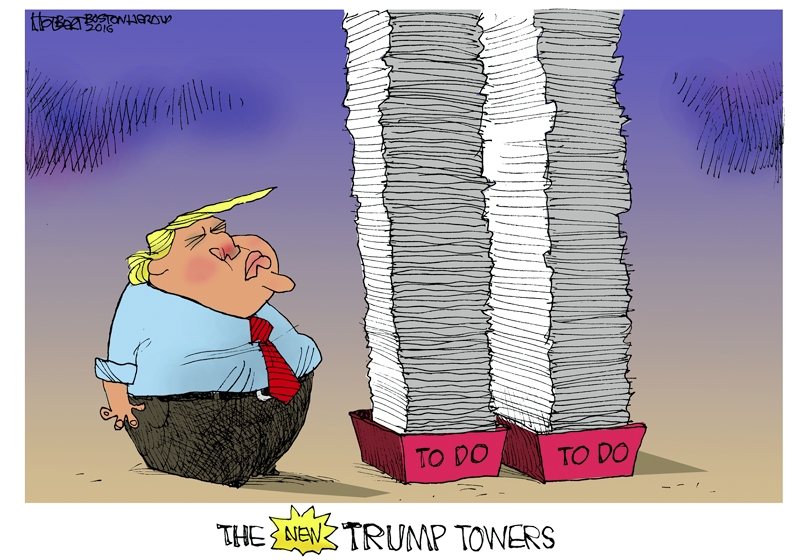 California and New York openly encourage illegal immigrants to vote. (Or are you truly that ignorant.) They sponsor sanctuary cities, apply more social services to illegals than legal immigrants, and treat them as a special donor class, (from the which they expect to reap untold election votes in the years to come.)

Trump won the electoral college handily. He was not campaigning for a popular vote win, and it is unimportant by what margin Hillary won in California and New York. That’s the exact point behind the Electora College —  to limit one state’s influence over the electorate at large. The framers determined this country should not be controlled by the population centers.

If you don’t like the results, then leave the country. Sick of liberal crybabies. … President Trump! Get used to it or pack your bags.

… Editorial: Sowing doubt by the millions

Jerry Brown has encouraged illegal aliens to vote, has set the state government in opposition to assisting federal authorities. Many states allow illegal aliens to drive, to have drivers’ licenses — though they know they broke the law to be here — and then do motor voter registration.

Once Trump is in, there will be an investigation. This is just a quote, from “The Big Sleep,” per Philip Marlowe, so take it as you will. “It will be just as bad for you if I convince myself.” Americans in the contiguous heartland from Montana to the sea have had it with illegals, and the press needs to remember this.

… Letter: America will benefit if Trump follows through

How can one take Trump’s word when most of his statements are primarily inconsistent with the truth and reality? Is he the wolf who promises those who follow him like sheep that he will not eat them? Donald says he will drain the swamp. His appointments as of today contradict what he says, in my humble opinion. He will have a chance to keep his word.

If Stein is so worried about having fair elections that she wants recounts, why is she just demanding recounts in states that could swing the election in Clinton’s favor. In my mind, she should be calling for recounts in all the states to make sure that Trump didn’t lose a state he should have won if she’s really interested in fairness and honest elections. …

…Judges: NC must redraw legislative districts and vote again in 2017

Use a computer program to draw all the districts nationwide. Get gerrmandering out of the decision.

This decision is likely to come as a blow to current mayors and municipal elected officials who aspire to higher office.

Municipal elections ordinarily are seated in odd years (2017) when very few people turn out to vote, then run (for higher office) as incumbents in the even year (2018), without having to give up their municipal seat.

So in 2017, aspiring officials will be forced to make a choice, instead of hedging their bets. Maybe the costs of annual elections will be the catalyst for our legislature to move to a system of even-year-only elections, for all municipal and state offices statewide.

As a retired and disabled person, I am against “no knock” warrants because people may try to fight back against what they perceive as a home invasion. The police can surround a household before they knock on the front door.

Bubba, you are a miracle. Keep letting your light shine! God has big plans for you!

I live in Davidson County but always had and do business in both counties. Main problem with Salisbury it is like a gated community. When I had a business in Spencer, for some reason ones that live in Salisbury cannot figure out that their area goes farther than the railroad tracks on Main Street.

Very well said. Bravo! I would like to, however, add that when I ran for office I did state that Rowan should become partners with /join in with Davidson County and build an outdoor arena at the old Colortex mill site on U.S. 29 at the river. Davidson County owns the Wil-Cox Bridge and the historic Fort York, and this would be a great tie-in.

I also stated that the county should partner with the city and build a parking deck so both could benefit.

Rowan County has been run by the same mindset for the last 10 plus years. As a county we have not grown as our neighbors have; our employment prospects are very limited.

The largest manufacturing employer in our county is Freightliner. Largest employer is the Rowan-Salisbury School System. … It’s time to surpass our neighbors and stop trying to keep up or catch up with them.

Here is the main reason Rowan County is falling behind in the state and the nation regarding growth and inclusiveness. Numbers don’t lie. …

Last one out turn off the lights.

Our family was sitting close by and we were able to witness the excitement!

Congratulations. God bless you both

Congratulations to both of you. We enjoyed watching this happen.