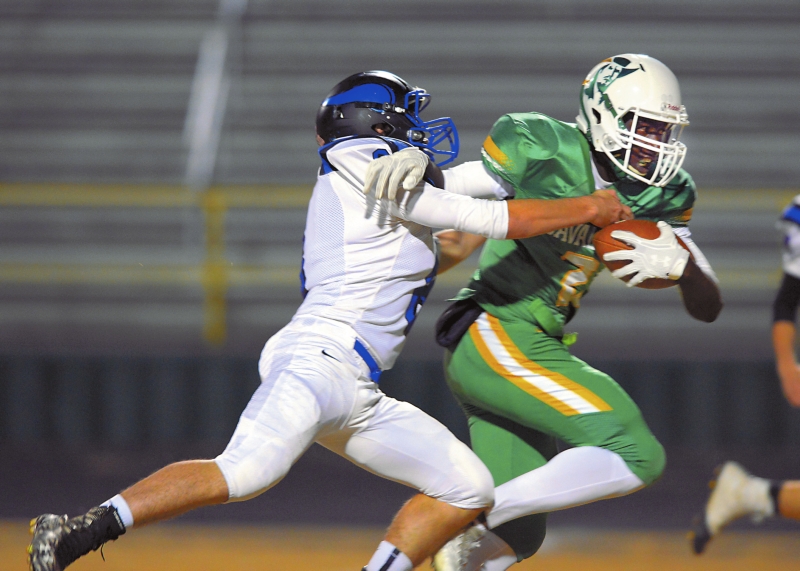 Wayne Hinshaw files photos/for the Salisbury Post North Rowan receiver Alonzo Sirleaf and West Rowan defensive back Deyquan Byrd are The Post’s Friday Night Heroes as their teams are in the third round of the state playoffs. Sirleaf is shown with the ball against North Wilkes, earlier this season.

SPENCER — North Rowan receiver Alonzo Sirleaf has caught more than his share of passes in a strong career that has lifted him into Rowan County’s top 40 all-time for receptions (66) and top 30 all-time for receiving yards (1,142).
“Zo has been that solid go-to guy for us,” North coach Ben Hampton said. “When we’ve needed a first down, we’ve thrown it to No. 2 a lot.”
On the surface this is an odd week to be saluting Sirleaf because when North won at Brevard, 27-21, on Friday to advance to the third round of the 2A state playoffs, he had one of the quietest statistical games of his three-year varsity career. He caught two passes for 23 yards.
Yet Sirleaf was instrumental in the Cavaliers’ victory because there’s more to being a wideout than catching footballs. Receivers are also asked to block, and that’s the aspect of the game at which Sirleaf excelled on Friday.
“We knew if we made our blocks on the outside, we’d make big plays,” Sirleaf said.
At 6-foot-2, 200 pounds, Sirleaf, a basketball power forward, is not someone that the average DB enjoys confronting physically.
“He’s got that prototypical football body,” Hampton said. “And he’s one of the best athletes in the county.”
When Sirleaf was a sophomore, North still had Sakil Harrison and Shareef Walker running routes, but Sirleaf was talented enough to carve out a role. He made 10 catches for 192 yards and two touchdowns.
As a junior, he progressed to 18 catches for 421 yards and three TDs, while averaging an eye-popping 23.4 yards per catch.
As a senior, he’s been the county’s second-best receiver behind West Rowan star Kortez Weeks. Sirleaf has 38 catches for 529 yards and seven touchdowns. He’s had at least one catch in every game and he’s bumped his career TD total to 12.
“The play I remember the best this year was the touchdown against Carson,” Sirleaf said. “That was like a video game Madden play. I caught the ball, paused, made a spin, and then went for a touchdown.”
Sirleaf is a member of North’s strong senior class that has fueled a resurgence to 11-2 after last season’s 5-7 mark and first-round playoff exit.
“A lot of us have played together since we were freshmen,” Sirleaf said. “We knew we could have a really good team if we put in the work.”
Putting in the work has led to a Central Carolina Conference championship and eight straight victories.
The Brevard game provided unique challenges. North was 0-3 lifetime against Brevard and the 165-mile trip meant that it wouldn’t be business as usual.
“That was a very long trip,” Sirleaf. “Mostly we watched movies.”
Many Cavaliers watched “Friday,” a comedy classic from the 1990s, but they knew the game would be a serious test.
Things didn’t begin well for Sirleaf, who dropped the first pass QB Corbin Smith fired in his direction.
“You drop one early and it’s easy for a receiver to go into a shell a little bit, and then as the game unfolded, we could see we were going to rely on our running game more than our passing,” Hampton said. “Sirleaf showed a lot of maturity and a lot of leadership. He understood the situation. He blocked his tail off. He took pride in blocking for the running game, and he pancaked people. He helped guys spurt loose.”
The two key plays for North were an 89-yard screen pass from Smith to Jayden Jones and a 75-yard scoring run by Jaleel Webster. Sirleaf had physical blocks on both.
“I did pick up the blocking a little bit because we knew if we all blocked, the game was ours,” Sirleaf said. “I punished some kids, put them on the ground.”
Webster had a phenomenal, workhorse game – 26 carries for 295 yards — to surge past 1,300 yards for the season. Smith surpassed 2,000 yards of total offense for the season.
Sirleaf didn’t have any stats to brag about, but coaches and teammates knew how much he contributed.
“Zo has had games with six or seven catches and games with a whole lot of receiving yards,” Hampton said. “But we’ve never been happier with him. He took it upon himself to help us run the ball.”
Sirleaf figures to reclaim his starting role with the basketball team in due time, but he’s in no hurry to hit the hardwood.
“I’ll be excited for the Christmas tournament,” Sirleaf said. “But we’ve got some more to do on the football field.”
•••
NOTES: Zion DeBose is up to 20 sacks for the season. … North’s defense is allowing 71.2 rushing yards per game after holding Brevard to 48. That was a season low for Brevard. … Smith is the 14th Cavalier to surpass 2,000 yards of total offense in a season. … Webster’s 295-yard outing was his second monster effort of the season. Officially, he had 20 carries for 302 yards in setting a school record against Lexington. … Jacob Young has nine field goals and his 60 points tie him with Webster for fourth in the county in scoring. … Next for North is a trip to play the Reidsville Rams (13-0). “They’re a perennial power and they can throw it or run it,” Hampton said. “They’ve got some grown men. We’ve just got to go up there and ask our linemen to win those battles at the line of scrimmage one more time.” … North Rowan will stop for a walk-through at North Carolina A&T in Greensboro on the way to Reidsville. A&T offensive coordinator Chip Hester, the former Catawba coach, helped with the scheduling of the venue.