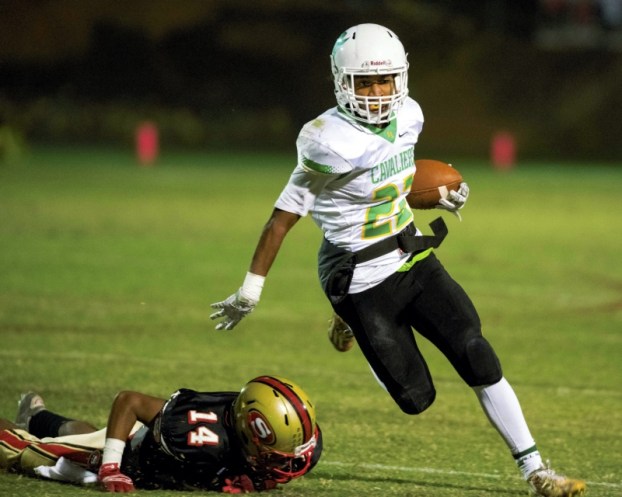 Prep Football: Previews for Round 3 of state playoffs

The second round of the state playoffs separates the boys from the men, and anyone still playing in tonight’s third round has speed, size, toughness and coaching.
Basketballs started bouncing off rims in gyms more than two weeks ago, but West Rowan, which won at home last week against a defending state champ, and North Rowan, which went on the road and won against a school it had historically struggled against, are still playing football.
“That means it’s been a pretty good year for Rowan County,” North Rowan coach Ben Hampton said. “Two football teams playing after Thanksgiving.”
Those teams are coached by brothers-in-law. West Rowan coach Joe Nixon is married to Hampton’s sister, Hillary.
One of them, obviously, will be Rowan County Coach of the Year. Both have their work cut out tonight with road trips to face undefeated teams.
The good news — if there is good news — is that if they survive tonight, they might go the distance.
Davie County also is still playing. No huge surprise there, because Davie has been one of the best teams in 4A since it got quarterback Chris Reynolds and receiver Cooper Wall healthy.
Davie is a No. 1 seed and is at home tonight but it can claim the we-have-chips-on-our shoulders underdog role. The one team that beat Davie this season — Greensboro’s James B. Dudley High — is visiting Mocksville.
There’s a chance all three area teams will go down and we’ll start turning our attention full-time to winter sports after we wake up on Saturday morning. But there’s also a chance that the dream will continue for one or more of the area teams. Because when you get to this round, you’re good enough to have a chance against anyone.
Everyone still playing owns a winning streak, whether it’s a modest two-game streak like West Rowan or a 13-game streak like Reidsville and Hibriten.
The picks were 2-1 last week and are 61-17 for the season. Picked to lose, West squashed Crest like an empty tube of tooth paste. Talking to West cornerback Deyquan Byrd on Wednesday, he casually mentioned that some people doubted the Falcons last week, but he was nice about it.
More doubt for the Falcons tonight? Not me.

(2) WEST ROWAN FALCONS (10-3) at (1) HIBRITEN PANTHERS (13-0)
Class: 3A
Round 2: West Rowan 35, Crest 7; Hibriten 62, Burns 28.
History: West beat Hibriten in Mount Ulla, 20-14, in the 2010 3A West final. That was the 45th win in a row in West’s famous streak. That one came down to the last play and was the toughest game all season for the Falcons, who whipped Eastern Alamance the following week for the state title.
MaxPreps state ranking: Hibriten (18th), West Rowan (48th).
Home/Road: Hibriten is 8-0 at home. West Rowan is 3-2 on the road.
Streaks: Hibriten, obviously, has won 13 in a row. West has won twice since a home loss to Hickory Ridge closed the regular season.
Points scored: Hibriten 50.4 points per game. West Rowan 26.8 points per game.
Points allowed: Hibriten allows 10.6 points per game. West Rowan allows 16.6 points per game.
Players to watch: West linebacker L.J. Robinson and interior lineman Devin Turner have combined for more than 50 tackles for loss. Cornerback Deyquan Byrd has eight interceptions. Safety Malcolm Ingram has six picks.
West is balanced offensively, with QB Payne Stolsworth (24 TD passes) throwing to Kortez Weeks (18 TD catches). Jovon Quarles (1,416 rushing yards, 18 TDs) provides most of the running.
For Hibriten, quarterback Jamar Ferguson and backs McKinley Weatherspoon and Chris Scott have turned football games into track meets. Receiver/DB Jarius Cotton is headed to the Shrine Bowl.
Worth knowing: Hibriten is a mountain, not a town. The school is in Lenoir and is at the foot of Hibriten Mountain, one of the oldest mountains in the U.S. Hibriten’s name comes from the city of Brighton, England, as in High Brighton.
OUTLOOK: West’s basic defensive philosophy is to stop the run and force teams to throw. The Panthers run 95 percent of the time, and any pass they throw is a sneak attack. They use a triple-option based offense out of the flexbone formation, which means a fullback behind the QB and with two slotbacks (one on each side) aligned close to the line of scrimmage. Most Hibriten plays start with a slotback going in motion. As the slotback reaches him, the QB either gives the ball to the fullback for a dive play or fakes a handoff to the fullback and runs with the ball with the slotback available as a pitch man.
Historically, West’s defense excels against run-heavy option teams, and there’s a reasonable chance that the physical, fast Falcons, who have played a tougher schedule than Hibriten, will be able to hold a team averaging 50 points in the 20s. Hibriten also has awesome defensive numbers, but the Panthers have given up 28 points in both rounds of the playoffs. If the Falcons can score 28, they can win.
Next: The South Point/Pisgah winner.
Pick: West Rowan 28, Hibriten 27

(3) NORTH ROWAN CAVALIERS (11-2) at (1) REIDSVILLE RAMS (13-0)
Class: 2A
Round 2: North Rowan 27, Brevard 21; Reidsville 45, Mountain Heritage 16.
History: A perennial power, Reidsville’s most recent title was a 2AA crown in 2009. Reidsville has never encountered North Rowan.
MaxPreps state ranking: Reidsville (33rd), North Rowan (78th).
Home/Road: Reidsville is 7-0 at home. North Rowan is 5-2 on the road.
Streaks: North Rowan has won its last eight games, while Reidsville has won them all this season.
Points scored: Reidsville averages 55.2 points per game. North Rowan averages 27.5 per game.
Points allowed: Reidsville allows a meager 6.3 points per game North Rowan allows 13.2 points per game.
Players to watch: North defensive end Zion DeBose has 20 sacks. Leading tacklers for the Cavaliers are nose guard Steven Thurston and linebacker Javin Goodine. North Rowan QB Corbin Smith has 21 TD passes, while Jaleel Webster has 1,310 rushing yards. Jacob Young usually gives North an edge in the kicking game. He’s booted nine field goals.
For Reidsville, senior QB Tanner Wilson has been tremendous with 34 touchdown passes and only three interceptions. Jaron Letterlough has 14 rushing TDs. Austin Chestnut has 11 receiving TDs and has run back five punts and one kickoff for TDs.
Worth knowing: Reidsville is 72 miles northeast of Spencer. Mostly north. It’s only 29 miles from Martinsville, Va.
OUTLOOK: Reidsville has been overwhelming opponents on both sides of the ball, but the Rams’ schedule has been pretty light. North will be the strongest team the Rams have played so far and North hasn’t lost yet to a 2A team.
Both teams are shotgun, one-back teams and both teams are well-balanced offensively.
North might be able to stop the Rams from running it, but the Rams throw it with precision. North has to win the turnover battle to have a shot.
Next: Lincolnton/Hendersonville winner
Pick: Reidsville 28, North Rowan 17

(2) DUDLEY PANTHERS (12-1) at (1) DAVIE COUNTY WAR EAGLES (12-1)
Class: 4A
Round 2: Dudley 55, Watauga 20; Davie 38, A.L. Brown 19.
History: Dudley won in Mocksville, 32-6, on Sept. 2.
MaxPreps state ranking: Dudley (8th). Davie (4th).
Home/Road: Dudley is 5-1 on the road. Davie is 7-1 at home.
Streaks: Dudley has won three straight since losing to Page. Davie has reeled off 10 straight wins since the loss to Dudley.
Points scored: Dudley averages 43.7 per game. Davie averages 33.6 per game.
Points allowed: Dudley allows 9.2 points per game. Davie allows 14.2.
Players to watch: Dudley’s Shrine Bowl center Dacquari Wilson was hurt when Dudley lost to Page but may play tonight. Dudley QB Hendon Hooker, a Shrine Bowl pick headed to Virginia Tech, has thrown for 2,009 yards while running for 914. He’s accounted for 42 touchdowns.
Davie has the school’s all-time tackler in James Boyle, the school’s all-time leader in receptions in Cooper Wall and a scintillating senior QB in Chris Reynolds, who has 25 TD passes in 11 games. Jared Griggs has kicked 15 field goals.
Worth knowing: Who is James B. Dudley? He was a president of North Carolina A&T University in Greensboro for many years.
Outlook: Looking back at the first meeting of the War Eagles and Panthers, Davie’s defense stuffed Dudley early and the War Eagles led 6-0 after two drives and two Griggs field goals. Wall was lost to an injury (cracked ribs) in the second quarter with Davie down 7-6. Hooker was disqualified in the second quarter, but Dudley still owned the second half without him.
Reynolds suffered a severe ankle injury at West Rowan, the week prior to the first Dudley game, but he’s healthy and extremely mobile now. He’s a fantastic high school player, and he’ll be the key to this game.
It’s not often that a No. 1 seed playing at home is regarded as the underdog by most of the world. Davie may embrace that role.
Next: East Forsyth/Charlotte Catholic winner
Pick: Davie 24, Dudley 21